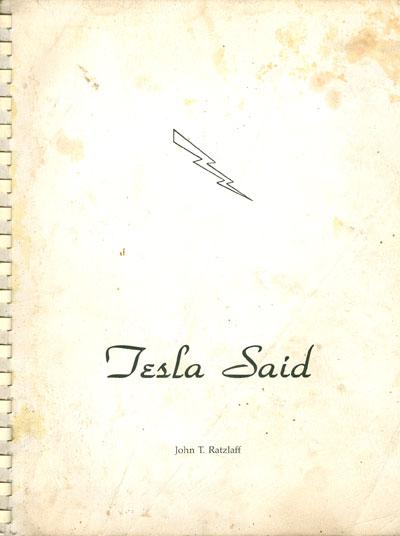 The collection of articles and papers presented in this volume are in Nikola Tesla's own words; it is the most comprehensive single volume of Tesla's writings presently available. A period of over a quarter of a century has elapsed in gathering this material from every known source, in addition to searching archival material from the decades around the turn of the century.

Mr. Tesla speaks for himself and the reader is enabled to make first hand judgments rather than relying on the opinions of others. The subject matter is arranged in chronological order and includes a wide range of interesting and important information not previously published in book form.

It is becoming recognized that Tesla's discoveries and inventions in the areas of alternating current power generation and transmission, high frequency and high voltage, along with basic radio communication, are the fundamentals of the present world-wide technological growth. Power transmission in small and large quantities without wires included plans for transmission of sufficient energy to make a light spot on the moon, and transmission of messages as far as distant planets. Tesla's adversaries seized on these concepts with ridicule and for the purpose of undermining his credibility. In fact, there is now a systematic quest for life and intelligence through the medium of radio astronomy which is a legitimate part of our present space program.

Mr. Tesla continually expressed the contention that his system of electrical transmission was not by electromagnetic means, although the equipment did display these effects. His comments on the ether therefore are significant and differ from those of his contemporaries. It is unfortunate that one of the major hurdles in presenting new and fundamental discoveries is that of communication.

Among the long list of accomplishments are new lighting systems, development and public demonstration of radio control before 1900, and new concepts in the cosmic rays. In the healing arts, Tesla was far ahead in the development of x-ray equipment, studies of physiological and other effects of high frequency on humans, and mechanical therapy.

His thoughts encompassed the widest possible range, extending from treatises on the moon's rotation to finding a reference to the use of a compass in the 13th century. While by nature opposed to war, he developed specific plans for military application aimed at providing defense mechanisms to make war impossible.

A new turbine design, incorporating low cost, simplicity, efficiency and light weight is today a commercial reality. At the time of development, successful demonstrations by the inventor were well received only in technical journals and news accounts.

The name of Nikola Tesla as a leader in the electrical field was well recognized in this country and abroad in the 1890's and for a few years after 1900. The reasons for his fall into obscurity are numerous, but a major point that seems to be commonly overlooked is that a struggling inventor, several times on the verge of financial success, was the victim of economic situations beyond his control. The business difficulties of George Westinghouse resulted in payment of a minute fraction of the true value of the Tesla alternating current motor and generator patents. The crash of 1901 was the most devastating to Tesla and also to his backer, J. P. Morgan, and prevented completion of the Wardenclyffe, Long Island, installation. It should be pointed out that Tesla was only complimentary of his financial backers.

It is intended that the information presented will help in clarifying many missing details and, for the first time, make available some of Tesla's basic thoughts and ideas in areas which are in need of further development for the benefit of mankind.