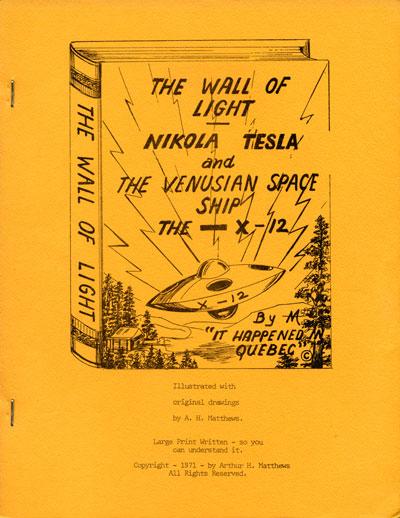 The Wall of Light: Nikola tesla and the Venusian Space Ship - The X-12

THE WALL OF LIGHT

THE LIFE OF TESLA

How did the world's greatest inventor invent? How did he carry out an invention? What sort of mentality did this wonder man have? Was his early life as commonplace as most boys'? What was the early training of this man from space? Was he an earth man? Did he come from the planet Venus? Was he born on a space ship? The answers to these and many other questions will be found in this story from the lips of the man himself.

In this autobiography concerning his early youth, and so on, we obtain a good insight into the wonderful life this man led. It reads like a fairy tale, but strange as it may be, it is true. Tesla was no common mortal. He led a charmed life--given up by doctors at least three times as dead, he was a young man at sixty and at seventy; with a brain just as keen the day he died, (if he did die, for many believe he did not). He always said he would live to the age of one hundred and fifty, so perhaps he is alive on Venus? That might be easy to believe now, for if man can build a rocket to the moon or Venus, there is no reason to doubt that science on that planet could be a thousand years ahead of earth man's. We know that space ships have landed on earth, all through the ages. Tesla said that he believed he came from the planet Venus, and during the landings of a space ship on my property, the members of that ship said that Tesla was a child from Venus. Tesla will tell you in his own words, what he believed. Read the story with care; there is a lot between the lines, as you will see. He had one great vice--his generosity. He could have been the richest man on earth. He made and spent millions. He was an idealist of the highest order, and to such men, money itself means but little.