One of the World's Largest Tesla Coils Up For Sale 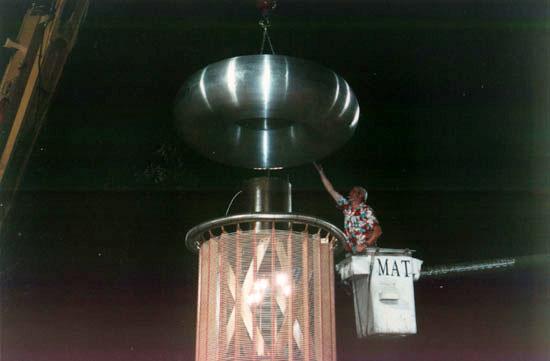 For those who may have never heard of Bill Wysock, he is one of the pioneers of modern day Tesla coil building. Among many other advancements in Tesla coil building, Bill has been credited for the transition from the sphere to the toroid as the most popular Tesla coil top-load. Bill is also Jeff Parisse's mentor and the chief engineer of kVA Effects.

The 13M is, without a doubt, one of the largest Tesla coils in the world. The “M” suffix in the model number designates it as a 3-coil system to which Tesla referred as a “magnifier.” The primary/secondary assembly of the 13M is over 10 feet in diameter and stands almost as tall. Its extra coil towers over 20 feet and is topped with a spun aluminum toroid with an unbelievable diameter of 8 feet and weighs in at 275 pounds.

The system is powered by a 100 kVA power transformer with a high voltage rating of 34.5 kV, and Bill has stated that the coil is capable of producing an output of more than 14-million volts.

I met Bill at a Tesla-related conference on Long Island back in 2006, and he and I have corresponded by email several times since then. When I saw his post about the 13M, I contacted him and mentioned the idea of posting the notice here on Tesla Universe. I've set up Bill's response as a forum post so that members may have open discussions about the 13M. The email from Bill includes many new details about the 13M system that you won't find anywhere else.

This is an opportunity to own a significant piece of Tesla-related history. There are numerous interesting stories behind the construction and the few public performances of the 13M. Hopefully, in the near future, we can feature them here on Tesla Universe.