In your issue of November 18† I find a description of Professor Ewing’s high-frequency alternator, which has pleased me, chiefly because it conveyed to me the knowledge that he, and with him, no doubt, other scientific men, is to investigate the properties of high frequency currents. With apparatus such as you describe, shortly a number of experimenters, more competent than myself, will be enabled to go over the ground, as yet but imperfectly explored, which will undoubtedly result in the observation of novel facts and elimination of eventual errors.

I hope it will not be interpreted as my wishing to detract anything from Professor Ewing’s merit if I state the fact that for a considerable time past I have likewise thought of combining the identical steam turbine with a high frequency alternator. Anch’ io sono pittore. I had a number of designs with such turbines, and would have certainly carried them out had the turbines been here easily and cheaply obtainable, and had my attention not been drawn in a different direction. As to the combination to which you give a rather complicated name, I consider it an excellent one. The advantages of using a high-speed turbine are especially great in connection with such alternators. When a belt is used to drive, one must resort to extraordinarily large diameters in order to obtain the necessary speed, and this increases the difficulties and cost of construction in an entirely unreasonable proportion. In the machine used in my recent experiments the weight of the active parts is less than 50 pounds, but there is an additional weight of over 100 pounds in the supporting frame, which a very careful constructor would have probably made much heavier. When running at its maximum speed, and with a proper capacity in the armature circuit, 2½ h. p. can be performed. The large diameter (30 inches), of course, has the advantage of affording better facility for radiation; but, on the other hand, it is impossible to work with a very small clearance.

I have observed with interest that Professor Ewing has used a magnet with alternating poles. In my first trials I expected to obtain the best results with a machine of the Mordey type — that is, with one having pole projections of the same polarity. My idea was to energize the field up to the point of the maximum permeability of the iron and vary the induction around that point. But I found that with a very great number of pole projections such a machine would not give good results, although, with few projections, and with an armature without iron, as used by Mordey, the results obtained were excellent. Many experiments of similar nature, made in the course of my study, demonstrate that the ordinary rules for the magnetic circuit do not hold good with high frequency currents. In ponderable matter magnetic permability, and also specific inductive capacity, must undergo considerable change when the frequency is varied within wide limits. This would render very difficult the exact determination of the energy dissipated in iron cores by very rapid cycles of magnetization, and of that in conductors and condensers, by very quick reversals of current. Much valuable work remains to be done in these fields, in which it is so easy to observe novel phenomena, but so difficult to make quantitative determinations. The results of Professor Ewing’s systematical research will be awaited with great interest.

It is gratifying to note from his tests that the turbines are being rapidly improved. Though I am aware that the majority of engineers do not favor their adoption. I do not hesitate to say that I believe in their success. I think their principle uses, in no distant future, will be in connection with alternate current motors, by means of which it is easy to obtain a constant, and in any desired ratio, reduced speed. There are objections to their employment for driving direct current generators, as the commutators must be a source of some loss and trouble, on account of the very great speed; but with an alternator there is no objectionable feature whatever. No matter how much one may be opposed to the introduction of the turbine, he must have watched with surprise the development of this curious branch of industry, in which Mr. Parsons has been a pioneer, and everyone must wish him the success which his skill has deserved. 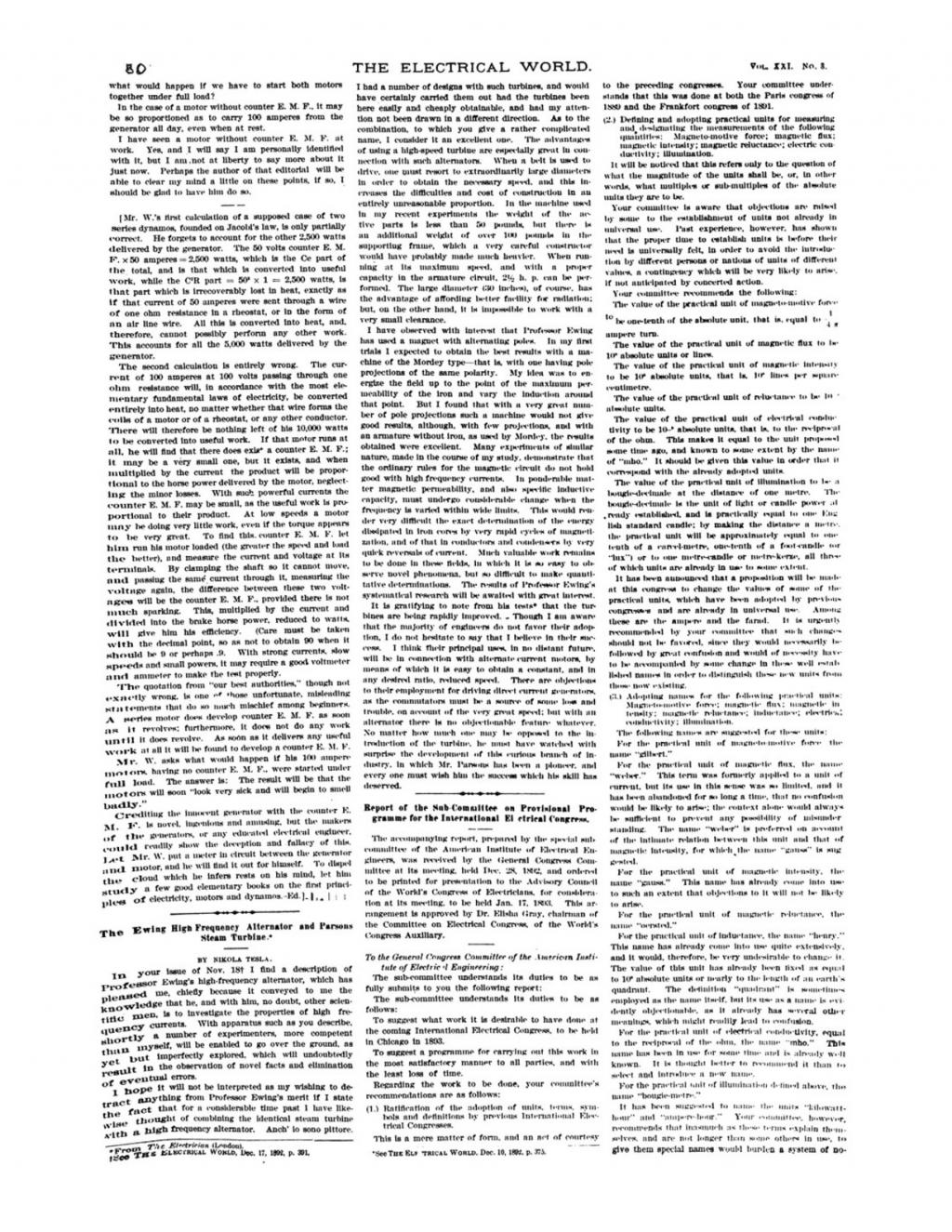