Experiments on the Electric Discharge in Vacuum Tubes

I have been much interested in the account of novel phenomena given under the title “Some Experiments on the Electric Discharge in Vacuum Tubes,” by Prof. J. J. Thomson, and published in your issue of June 10, inasmuch as several months ago I tried the same, or a very similar, experiment to that in which an induced discharge in a closed circuit vacuum receiver was obtained.

Briefly, my experiment was performed with a closed ring made of a glass tube about one inch in diameter, the external diameter of the ring being about six inches. This was exhausted to a fairly good vacuum and laid alongside of a single turn of heavily insulated wire, which formed part of the discharge path from the outside of a Leyden jar, arranged to be charged and discharged rapidly by a Toepler-Holtz machine. It was found that at every discharge of the jar there was a discharge in the tube giving a band of light in the vacuous space. The accompanying engraving Fig. 1 shows the arrangement of apparatus as just described.

It will be evident that to obtain the greatest value of electromotive force in the discharge tube the inducing turns should not exceed one, as otherwise the arrangement becomes a transformer, reducing the potential in the discharge tube. The wire used for the single inducing turn should be very heavily insulated and its turns separated, or the discharge may break through and, instead of going around the turn, short-circuit it. The potential induced in a single turn under these conditions of the experiment may easily reach 10,000 volts or more.

Curiously enough, the experiment of Prof. J. J. Thomson, in which a small pellet of mercury in an exhausted tube stopped the discharge, had its counterpart in my own experiments, as follows: I had constructed a two-way discharge tube, Fig. 2. One branch, a, was large in diameter and the branch b was of barometer-tube section. Wires sealed at c, d enabled a discharge to be passed. A small globule of mercury was placed in the tube and could be shaken down into the barometer tube and out into the large tube at will. Though the discharge would not always divide and pass through both tubes from c to d, it sometimes did; but the interposition of the mercury globule in the small tube stopped the discharge through it. Even without the mercury the discharge would often fail to pass, but reversing the coils of the Ruhmkorff coil used would often cause its derivation.

In one case, even when the mercury was in the small tube, the discharge passed, but the approach of metal objects near the tube would stop it temporarily; on their removal the discharge was resumed. This condition was so critical that it could not again be obtained, though efforts were made to obtain it. I have thought it well to record these observations, made independently, especially as the conditions were somewhat modified. 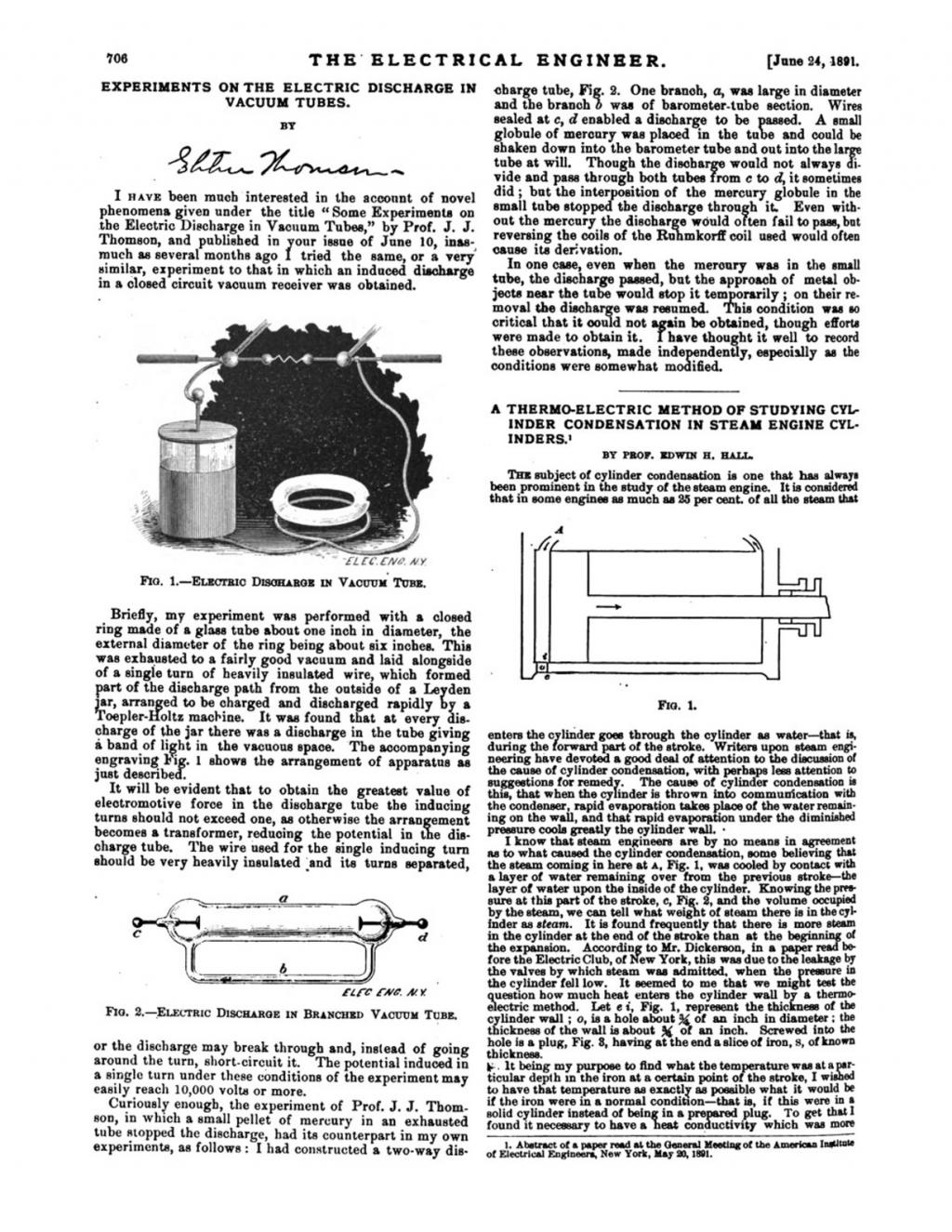