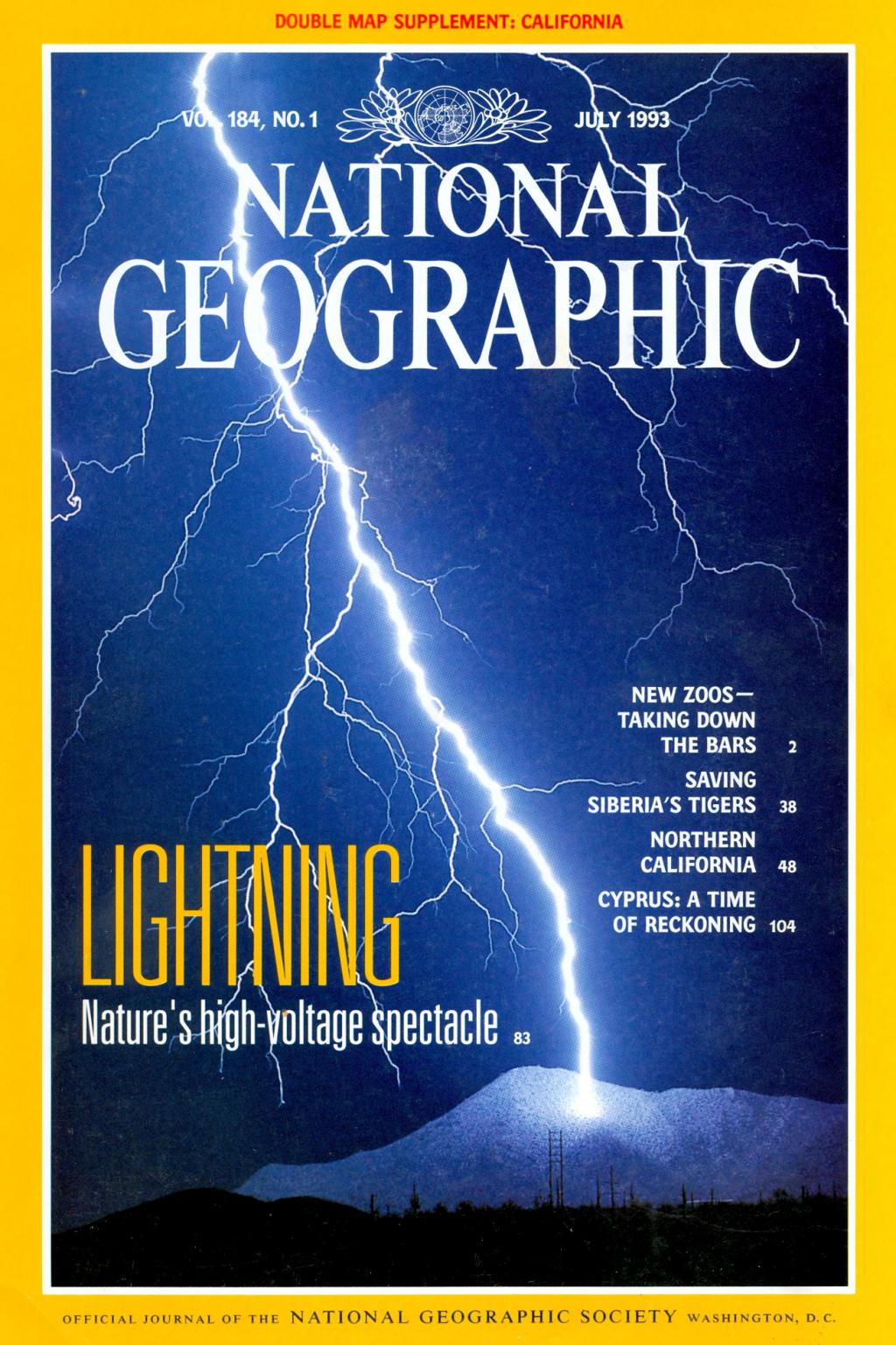 It is a river of electricity rushing through a canyon of air. Careering as fast as 100,000 miles a second, lightning sears wild and unstoppable through twisted channels as long as ten miles.

Drag your shoes along a carpet. You become a thundercloud. Your scuffing pulls electrons from the fabric, giving you a negative charge. Reach for a metal doorknob. It, like the earth under a thundercloud, is positively charged. Since opposites attract, when you get close enough, zap — the excess electrons stream to the knob in a miniature bolt.

Fiery sparks (left) crackle from a metal tube held by Bill Wysock, who also lights a 40-watt bulb in his hands. He sits on a metal disk linked by a cable to a 1.5-million-volt Tesla coil, a transformer producing high-frequency currents that pass safely over the surface of his body. Low-frequency currents would pass through it, meeting resistance and causing injury. 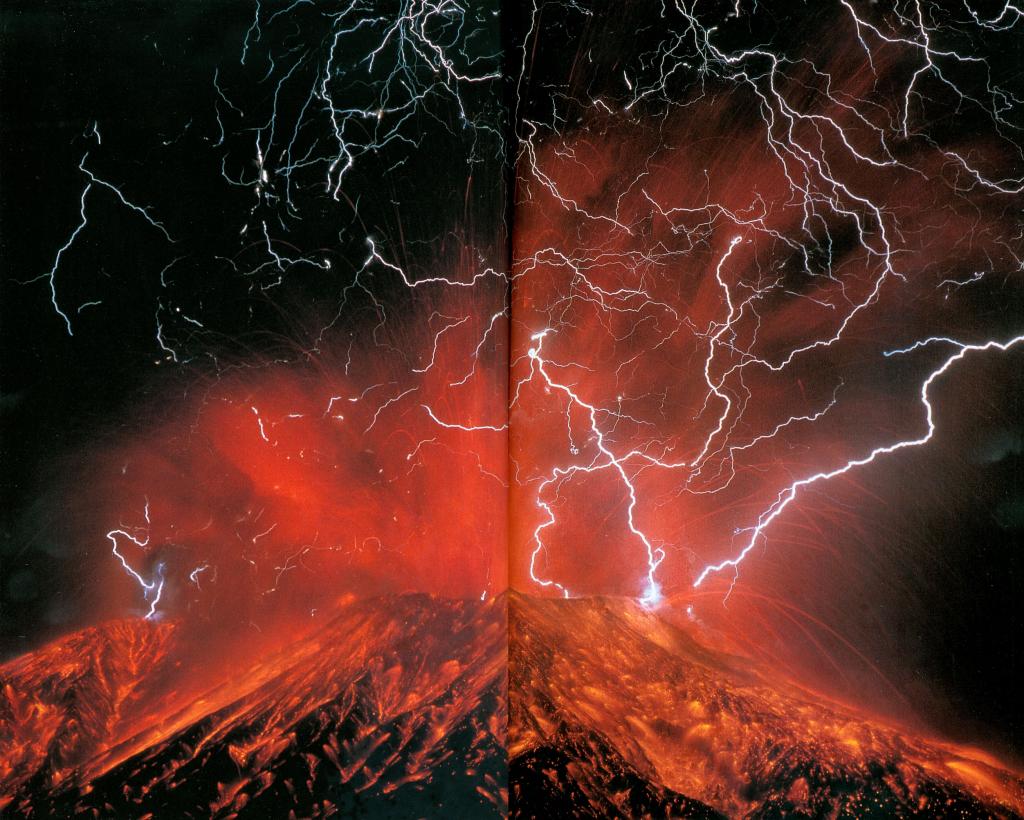 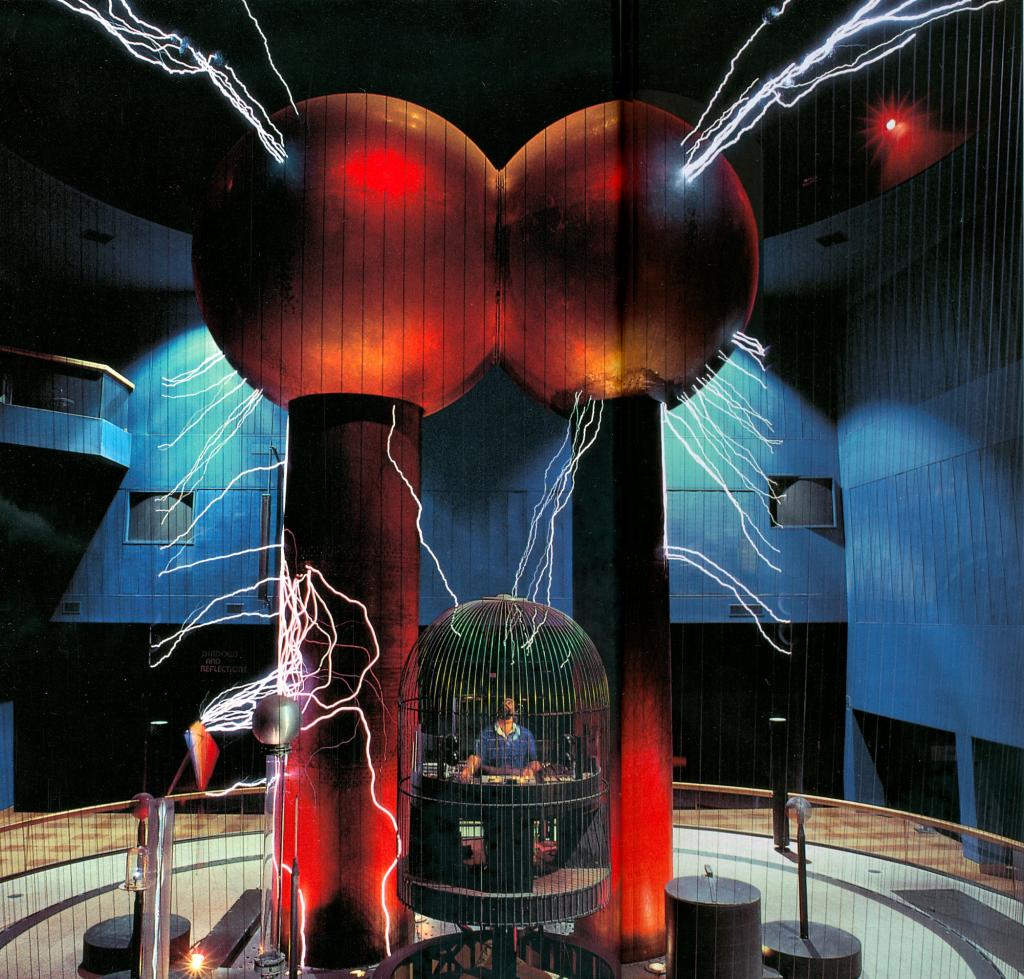 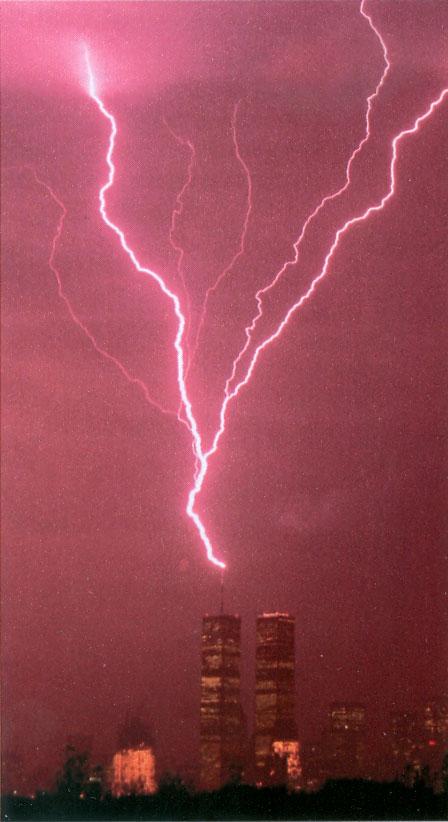 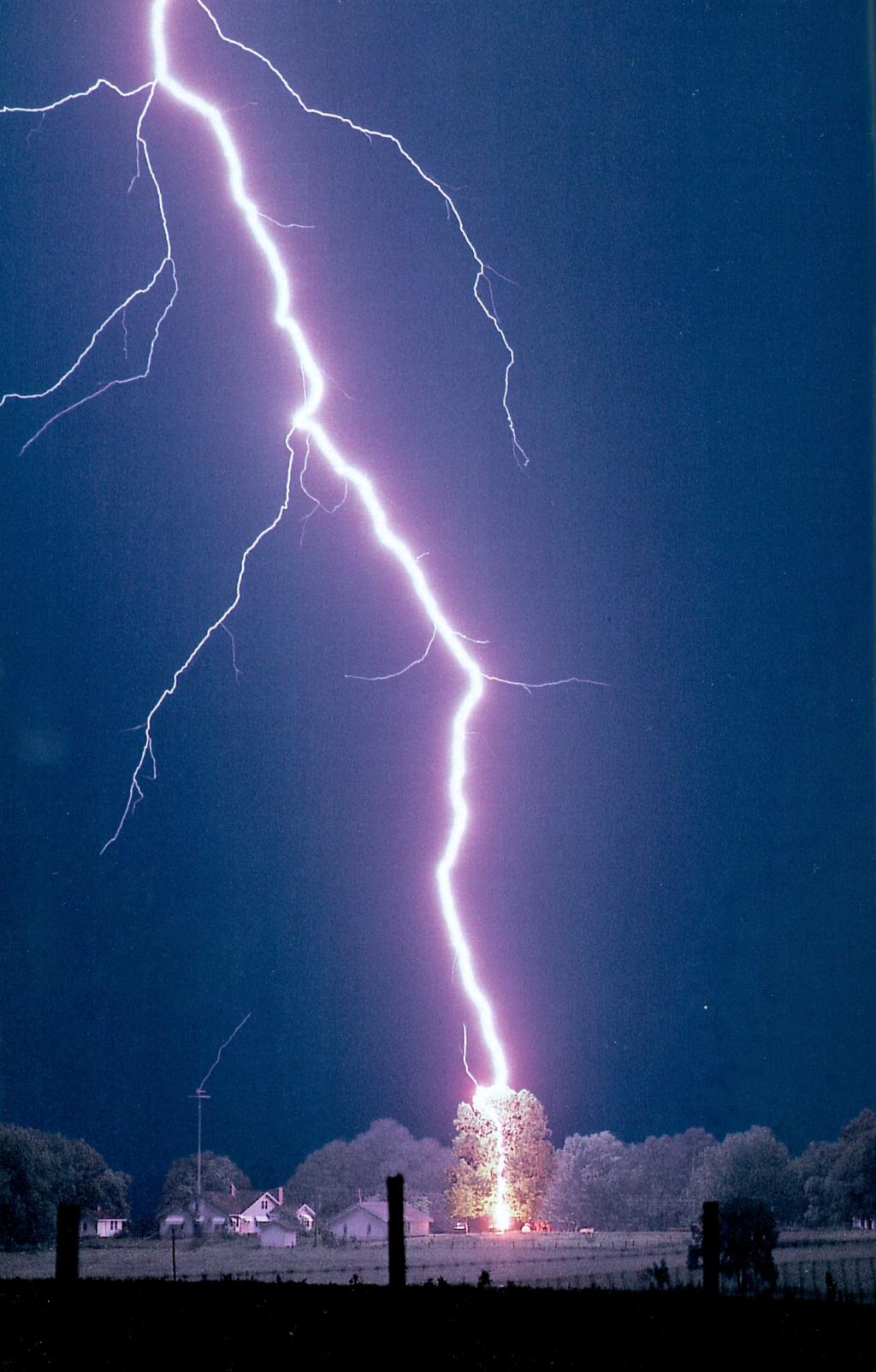 One lightning bolt and one 65-foot sycamore tree make a convincing argument against taking refuge under branches during a thunderstorm. Considered by experts one of the best pictures ever made of a lightning strike, the image at left was taken in 1984 by Johnny Autery of Dixons Mills, Alabama, from his pickup truck.

A remarkable detail in the photograph is a pair of upward discharges: one from atop the sycamore to the left of the main bolt and the other reaching from the television antenna of the farmhouse at left. Such discharges occur only in the area of a downward stroke.

“That little bolt took out one of the family’s TV sets,” reports Autery. “I guess if the big one had hit there, a lot worse would’ve happened.”

Most trees survive direct hits with little damage as the current passes over their surface to the ground. After a decade, this sycamore still stands.

Golfers are prime targets for lightning — they tend to either stand in open grassy areas or huddle under trees. A scored pattern on the fifth green at Phalen Park Golf Course in St. Paul, Minnesota (above right), defined ground zero where four golfers were injured — one fatally — by a June 1991 strike.

When lightning tunnels into sandy soil, the heat often fuses it into the shape of the electricity’s path. Called fulgurites after the Latin word for lightning, the formations can measure longer than 15 feet. This sample, from the Arizona-Sonora Desert Museum in Tucson, was dug up by a witness who saw lightning strike the ground in Arizona’s Avra Valley. 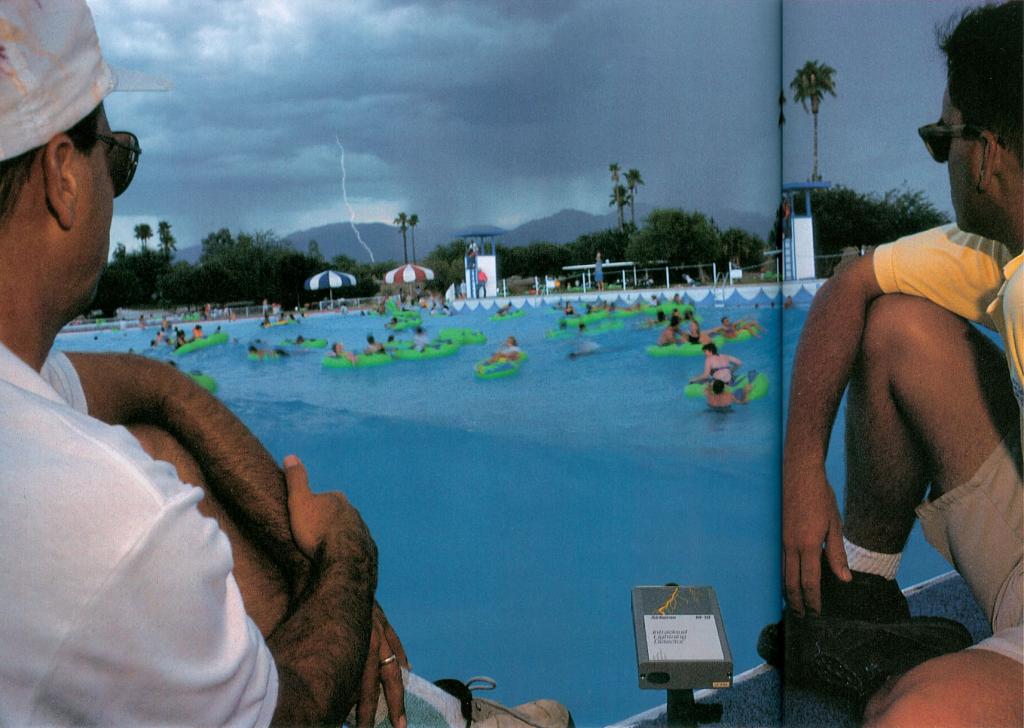 IN THE LINE OF FIRE 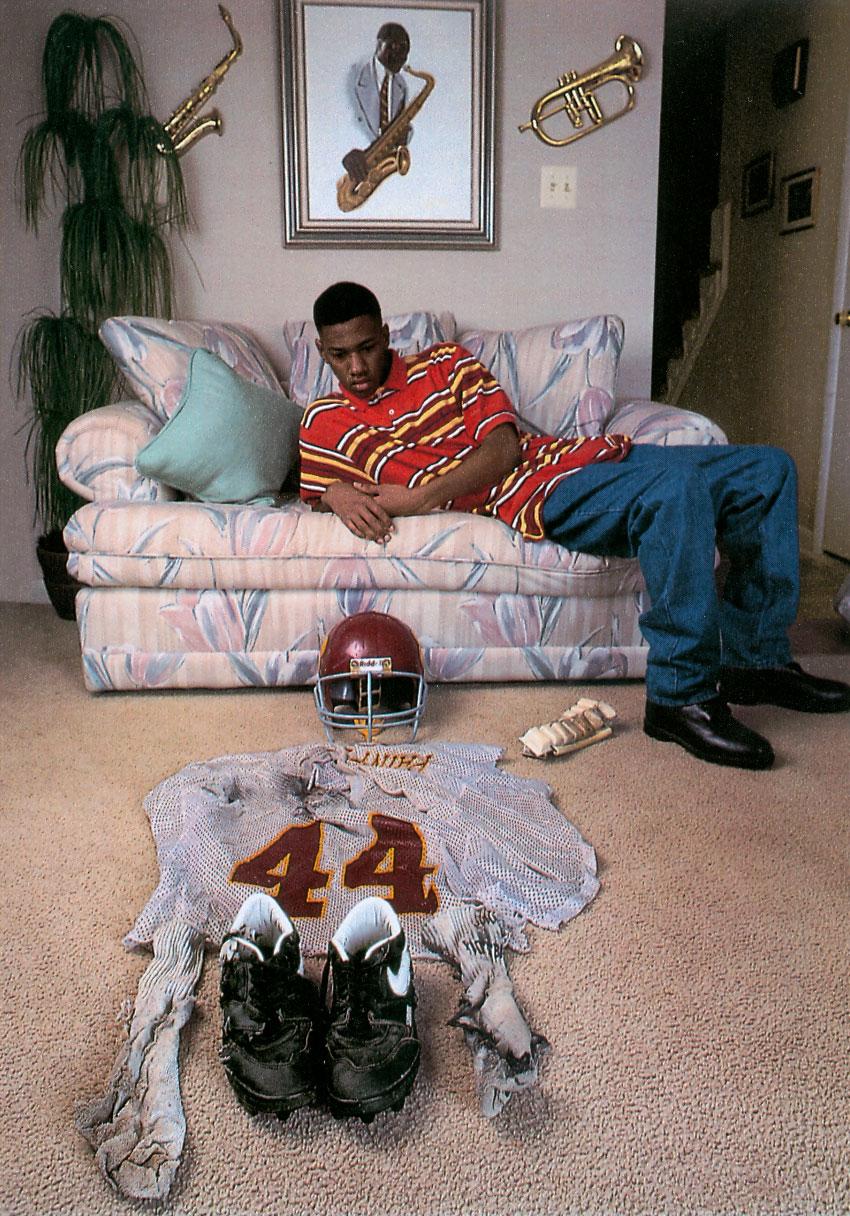 Swimmers are sitting ducks for lightning, so at a water park near Tucson, manager Ed Arrighi (above, at left) keeps a watchful eye on a distant storm. He is aided by a lightning detector that can register unseen flashes in the clouds above.

More than a year after lightning nearly killed him during football practice, Toy Trice (above right) still doesn’t want to talk about it. Eyewitnesses in Burtonsville, Maryland, saw a bolt tear a hole in the high schooler’s helmet, burn his jersey, and blow his shoes off. Toy’s breathing stopped, but he was resuscitated on the spot. 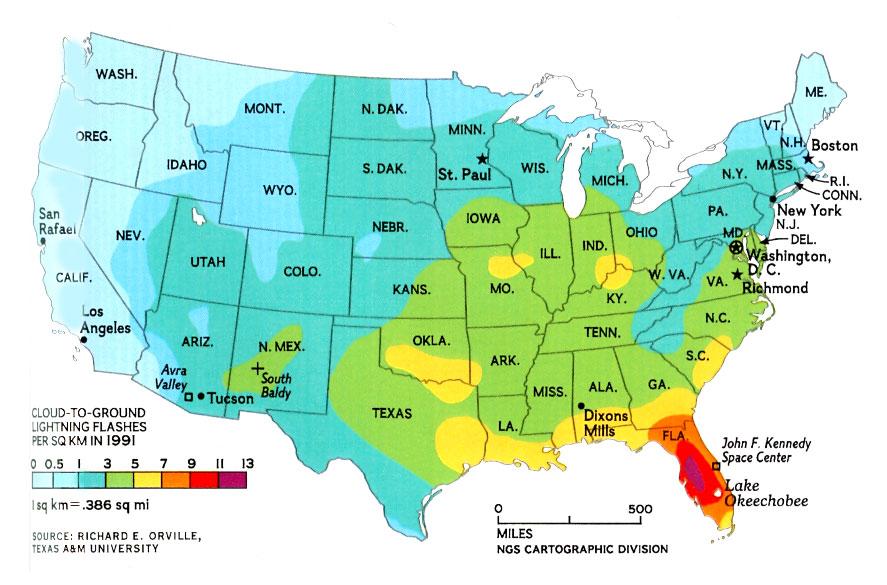 About a hundred Americans die from lightning each year, yet survival chances are excellent if quick first aid is nearby, says University of Florida professor Martin Uman, one of the world’s leading lightning experts. “The fact is, lightning isn’t that good at killing you.”

He and E. P. Krider, of the University of Arizona, invented a nationwide detection system that, on a computerized map, shows virtually every lightning flash as it happens. Such information enables scientists to plot lightning frequency over the U. S. on maps like the one at left.

In the course of a year, the most intense concentration of cloud-to-ground lightning assaults central Florida, which has plenty of lightning’s two major ingredients: moist air and sun-heated surfaces. In contrast the Pacific Northwest, which has very damp air but low mean temperatures, sees almost no lightning.

A cloud-to-ground lightning flash throbs with hundreds of millions of volts, more electricity than could be produced by all U. S. generators combined during that instant. Yet the flash is so brief that the electric energy where it strikes would power a light bulb for only a month or so. Virtually all lightning energy is converted into light, thunder, radio waves, and heat. The peak temperature of 55,000°F in the channel lasts a few millionths of a second — barely long enough to singe a victim’s clothes.

As a thundercloud billows, rising ice crystals collide with falling hailstones (inset above). The hail strips electrons from the ice. The top of the cloud becomes predominantly positive and the bottom mostly negative, with scattered positive areas at its base (large diagram at right). Negative charges in the lower cloud induce a positive region, or “shadow,” on the earth below. Static electricity builds, and a negative spark is launched from the lower cloud by a yet unknown trigger.

The descending spark creates jagged, branched channels; upward sparks sprout like weeds from the ground. When an upward and a downward spark meet (inset at right), the stroke we see spreads in both directions, superheating air and creating shock waves that produce thunder. 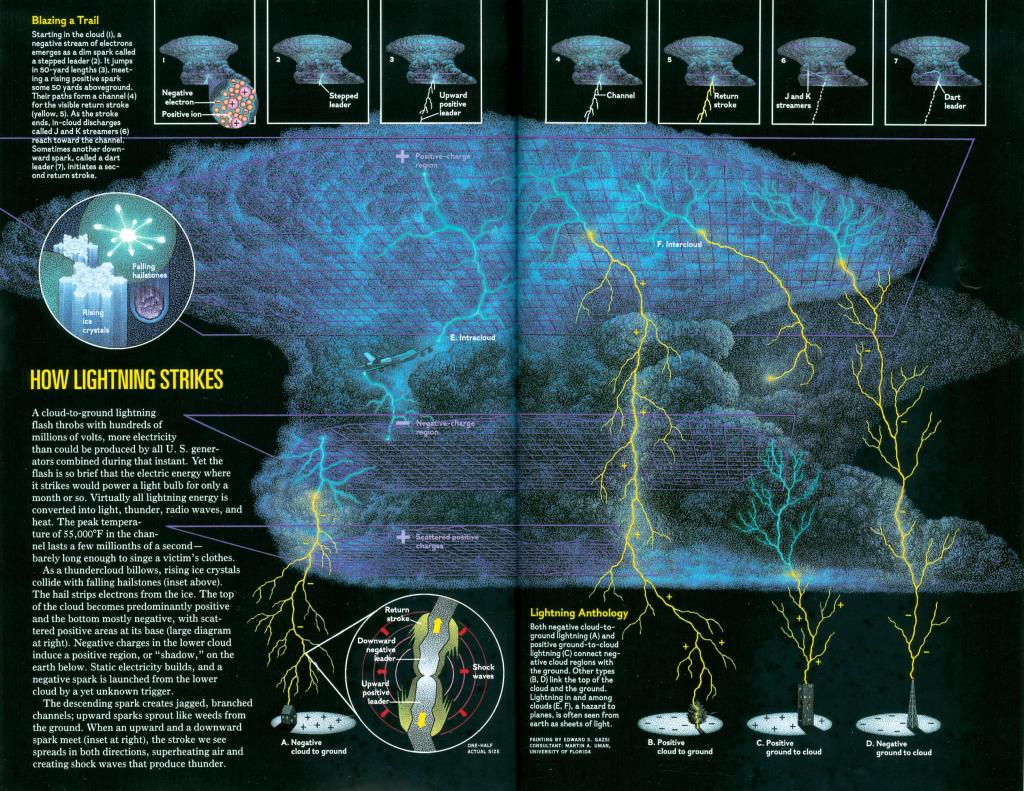 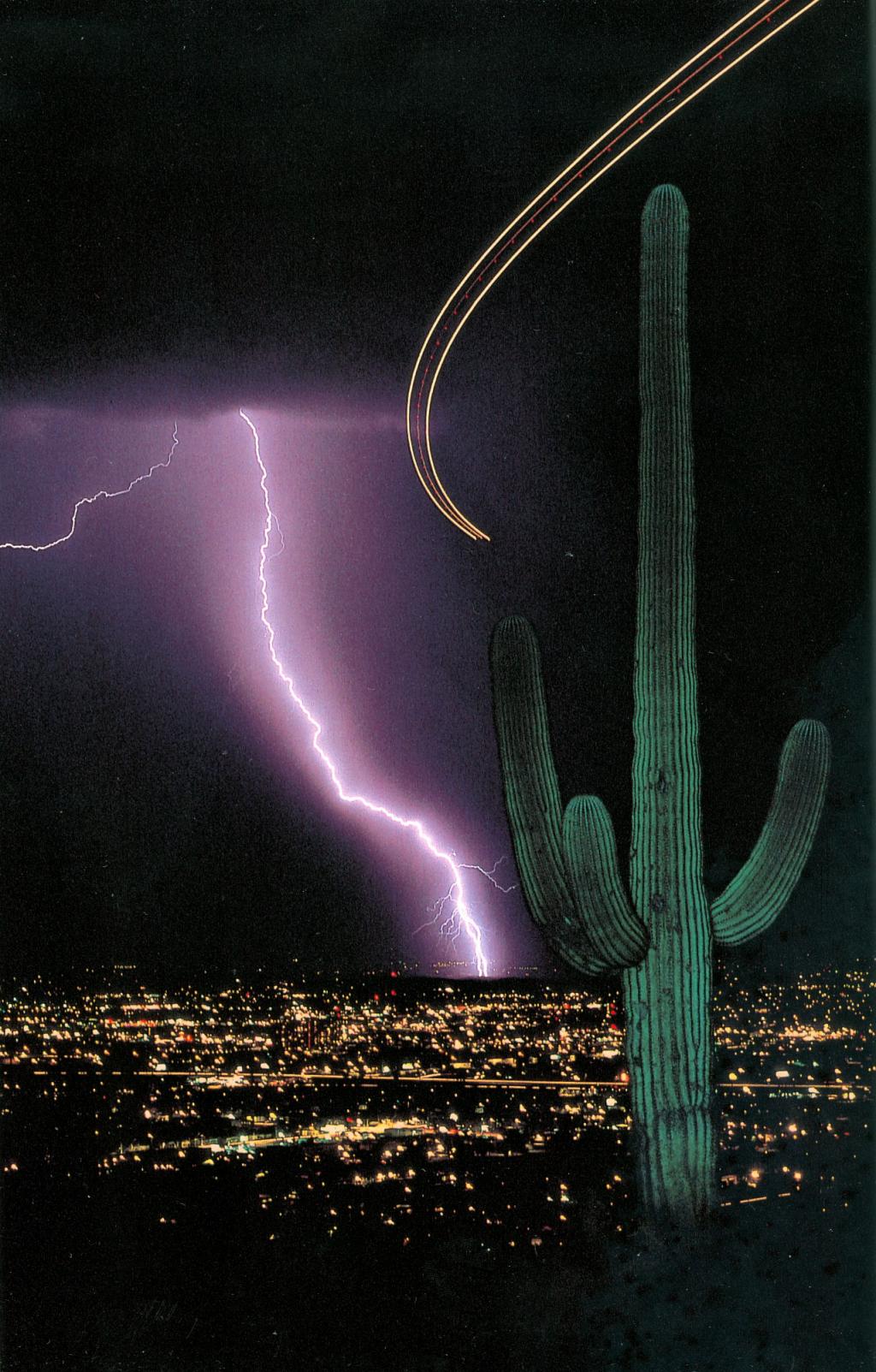 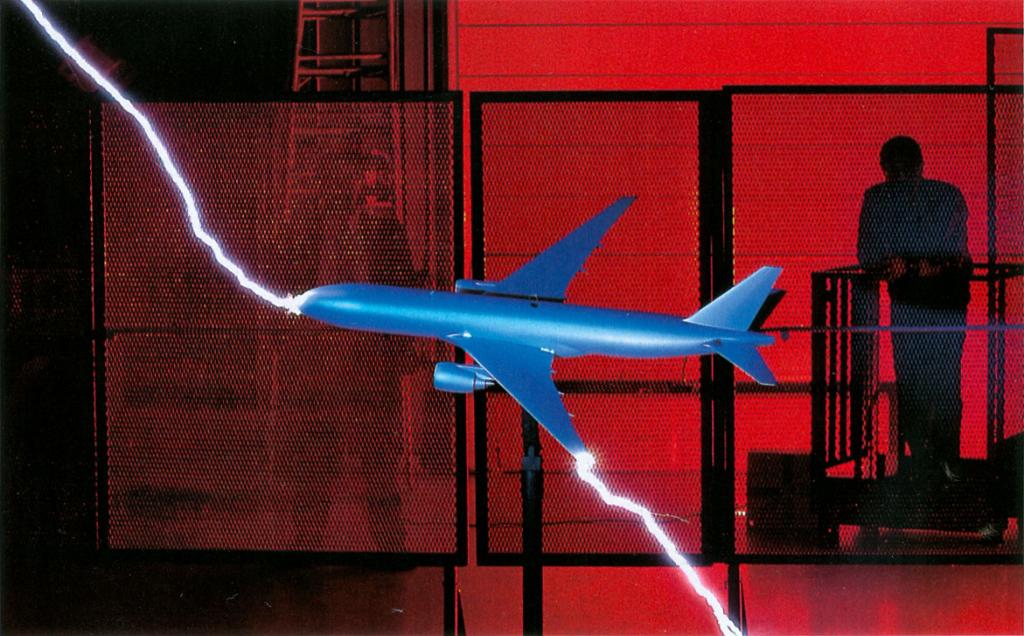 FLIGHT INSURANCE
An airliner’s lights trace a path around an intense summer thunderstorm, a routine maneuver for pilots on approach to Tucson International Airport.

On average, individual commercial jets are hit by lightning once a year and suffer only slight damage where the current enters and exits. Designed to meet Federal Aviation Administration requirements, the crafts’ metal surfaces and framework provide safe paths for the current — even through vulnerable fuel lines and tanks. Airliners use special shielding to protect delicate electronic guidance equipment from the crippling burst of electromagnetic energy emitted by a lightning strike. 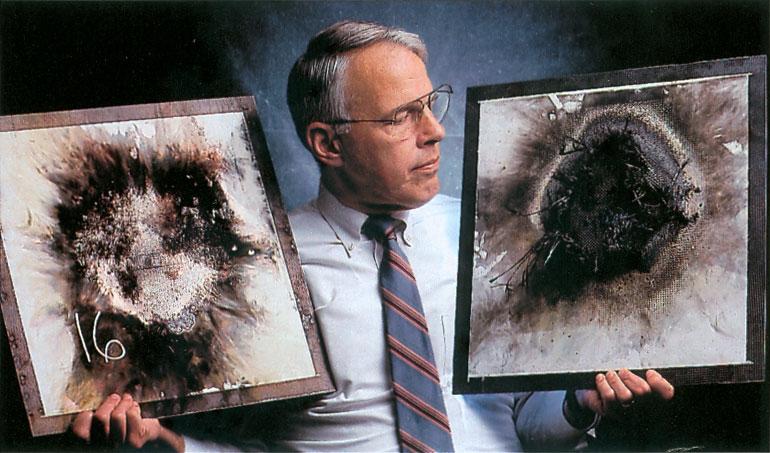 Before a new aircraft takes flight, its lightning protection designs are tested on the ground. At Lightning Technologies, Inc., in Pittsfield, Massachusetts, a 1.5-million-volt simulated strike zaps a scale model of the new Boeing 777 airliner (above). Repeated tests, with the model in different positions, reveal likely places for lightning to initially enter and exit the aircraft.

Planes with nonmetallic surfaces — which conduct electricity poorly and can thus suffer severe damage from a lightning strike — pose a special challenge for lightning protection. Lightning Technologies president Andy Plumer (below) holds two laboratory test panels made of carbon-reinforced plastic, used in aircraft construction. The sample at right was punctured by a simulated lightning strike. The test panel at left fared much better. Coated with a lightning-conducting copper mesh, it emerged intact, aside from some paint damage. 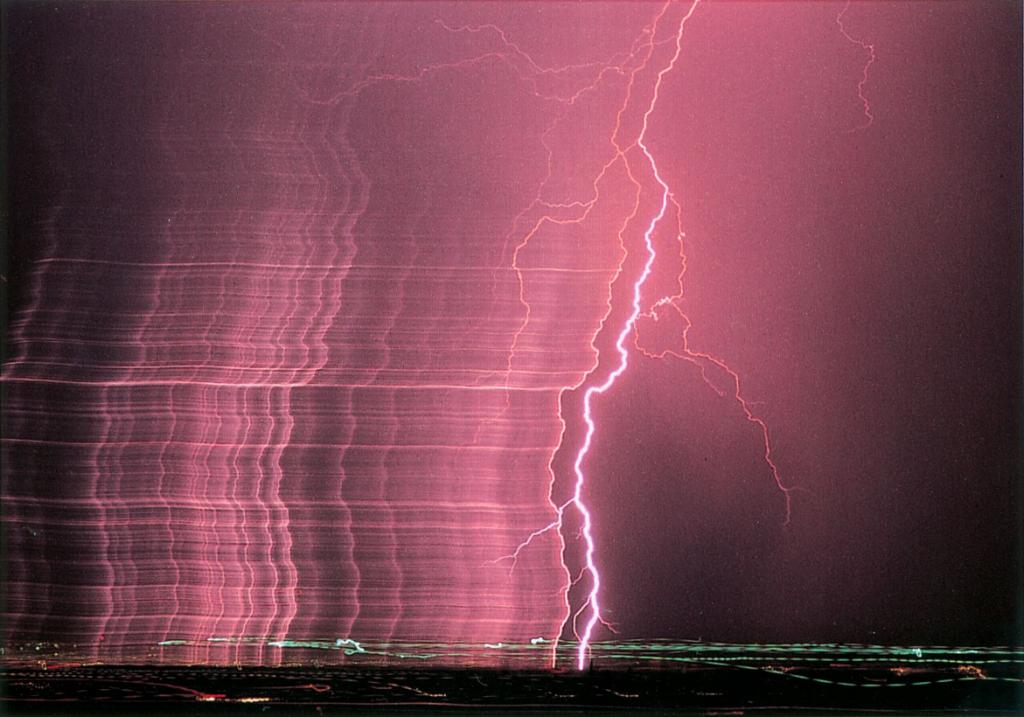 LOOKING FOR A CHARGE
Summoned by scientists who launched a three-foot-high rocket toward the belly of a passing thundercloud, a bolt of lightning crashes into Mosquito Lagoon near Florida’s
Kennedy Space Center (opposite). From the rocket’s tail a spool of copper wire unwound, triggering the strike and creating an artificial path for the cloud’s electric charge.

Sometimes experts go looking for lightning but simply can’t find it. The New Mexico Institute of Mining and Technology and the U. S. Air Force co-sponsored a rocket-triggered-lightning study on New Mexico’s South Baldy peak in the summer of 1992, but
on many days dry weather grounded the rockets (right).

Rocket launches provide the best chance for scientists to measure lightning’s electric current under somewhat controlled conditions. However, risks still loom: To eliminate the danger of the current following wires from the launch pad into the control trailer, the New Mexico scientists ignited rocket engines by blowing into a tube that was linked to a pneumatic switch on the pad.

Photography is another tool in the study of lightning, illustrating the numerous return strokes (above) that to the human eye appear as a single flash. A still camera panned from left to right with the shutter open reveals the first stroke of a flash to the right, with its characteristic branches, and some 20 subsequent strokes through the same air channel. Such repeat surges make lightning seem to flicker. 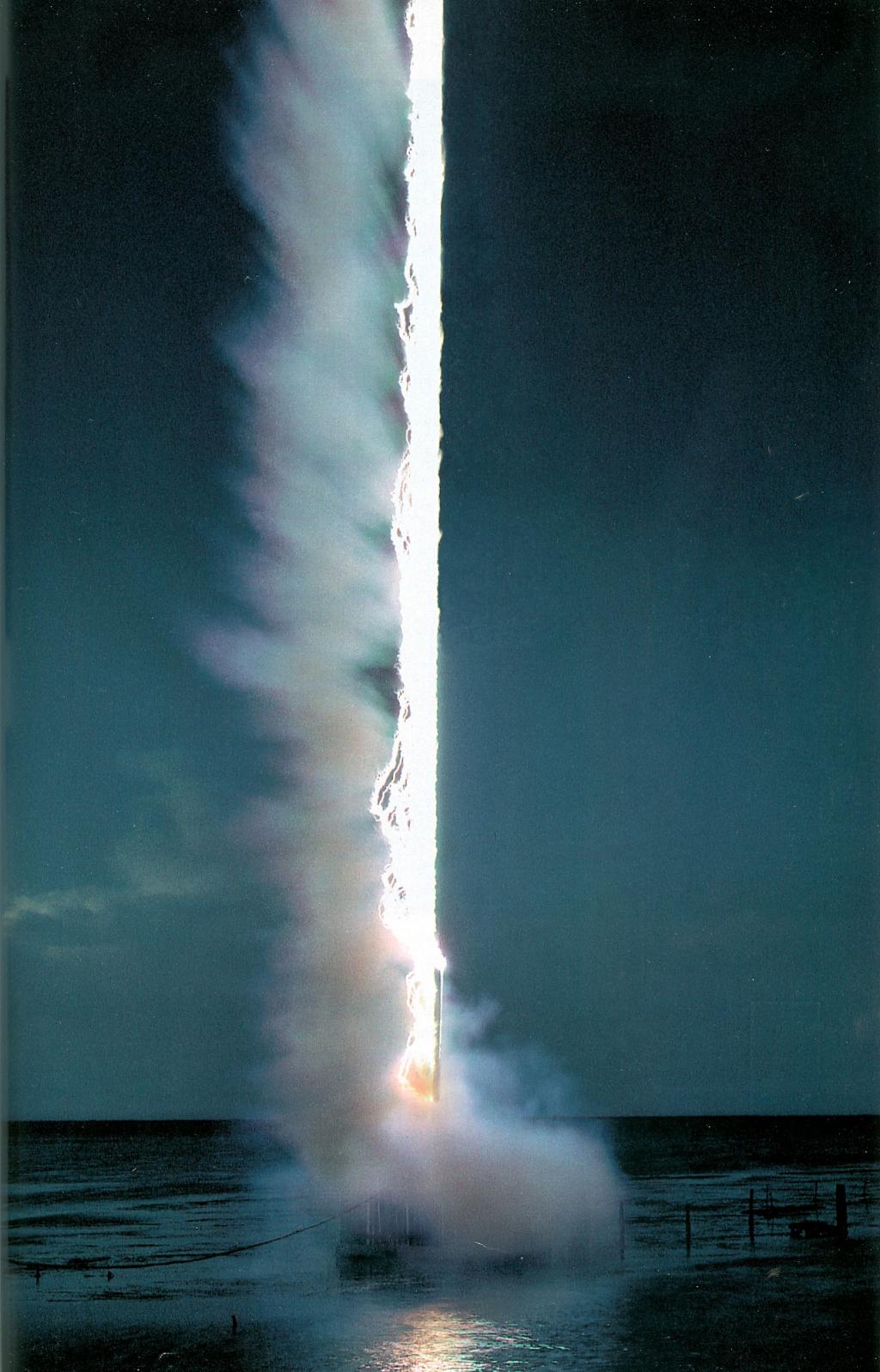 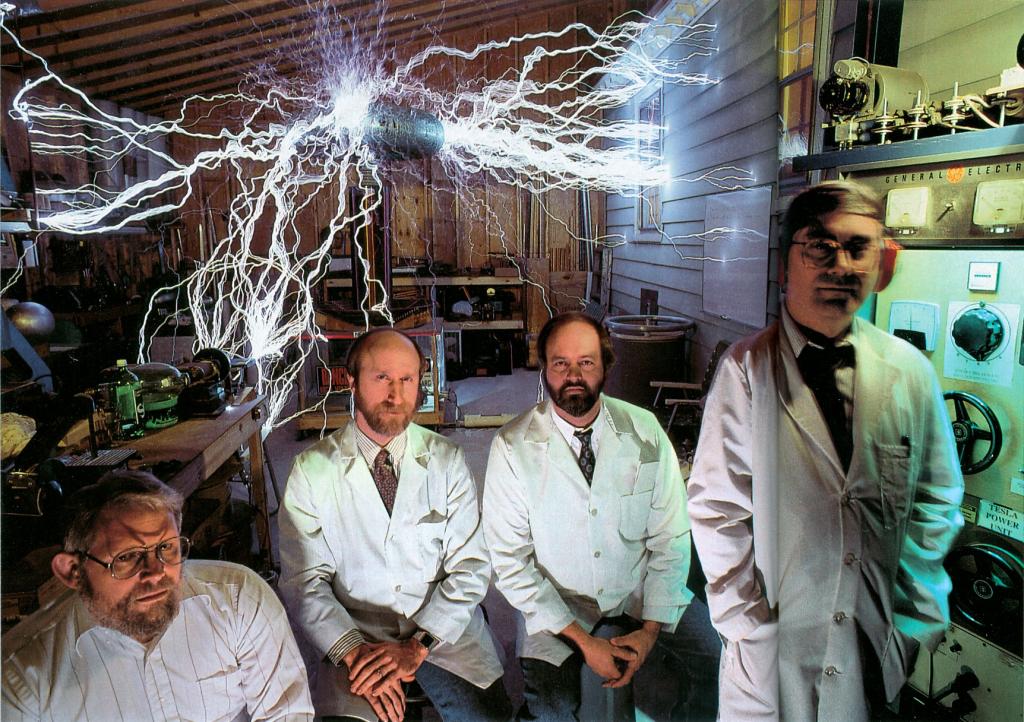 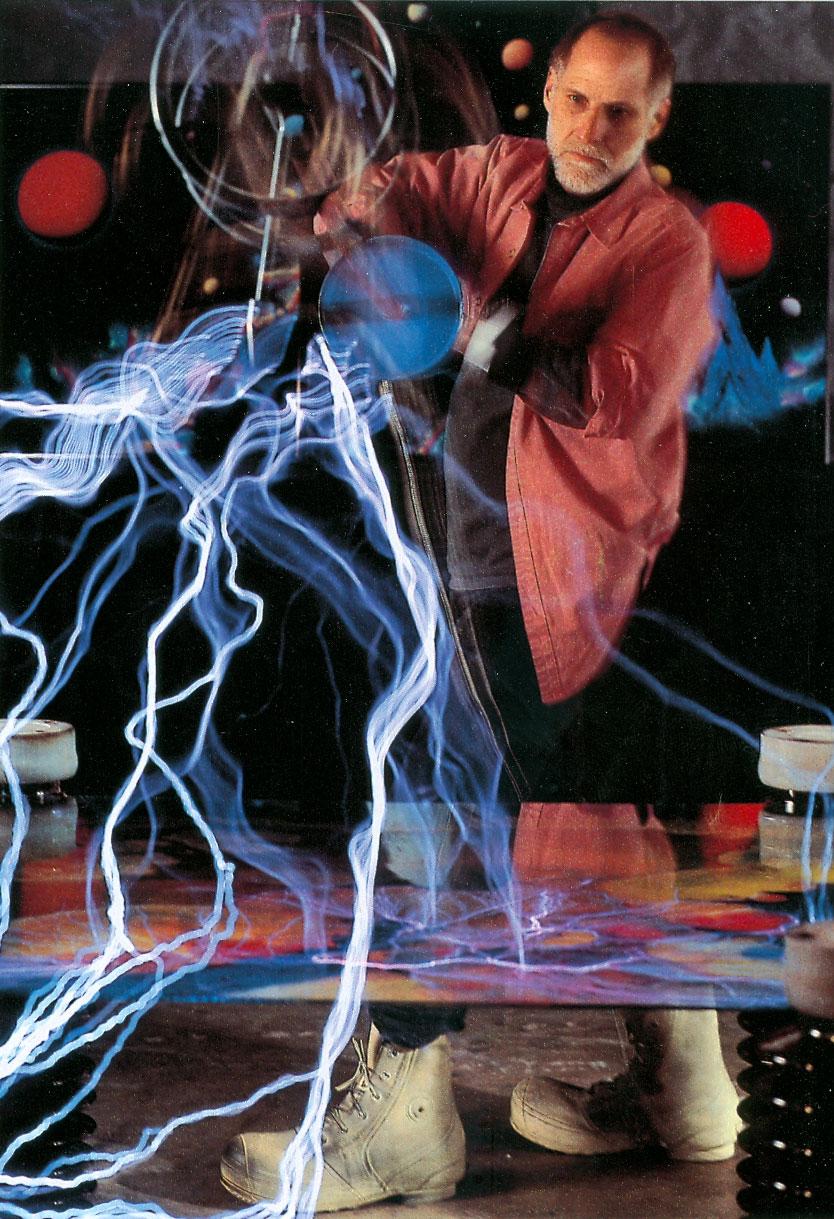 “The neighbors think I’ve got an arc welder going in here,” says Richard Hull (above), standing at the controls of a seven-foot Tesla coil assembly he built in a laboratory
addition to his Richmond, Virginia, home.

Invented in 1891 by Nikola Tesla — an early pioneer of the radio — the coil generates sparks by storing small amounts of house current for roughly one-sixtieth of a second, then releasing it in high-frequency bursts.

Using a massive coil in Colorado in 1899, Tesla claimed to have simulated ball lightning — bright, floating spheres sometimes witnessed during thunderstorms but still not explained by scientists. Hull and fellow members of the Tesla Coil Builders of Richmond meet monthly to discuss such esoterica. “But basically the appeal is that you get to hurl lightning.” 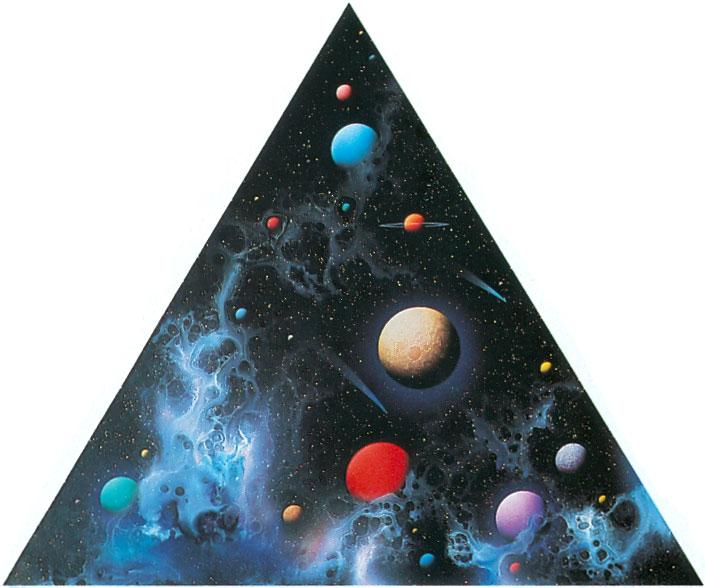 Wielding what he calls his lightning brush (above right), artist Dave Archer creates fantastic images of space nebulae in his San Rafael, California, studio. He spreads the paint on glass, supported by insulators, with an arc emitted by his 1.5-million-volt Tesla coil, then adds planets and other heavenly bodies with traditional artist’s tools. Paintings like his “Prismatic Passages” (right) sell for as much as $8,000.

Heavy rubber boots help ensure that Archer won’t fry his feet for art’s sake. “Painting with a million and a half volts at close quarters, you need a gentle touch and some protection as well,” he says. “It’s like playing with a bundle of cobras.” 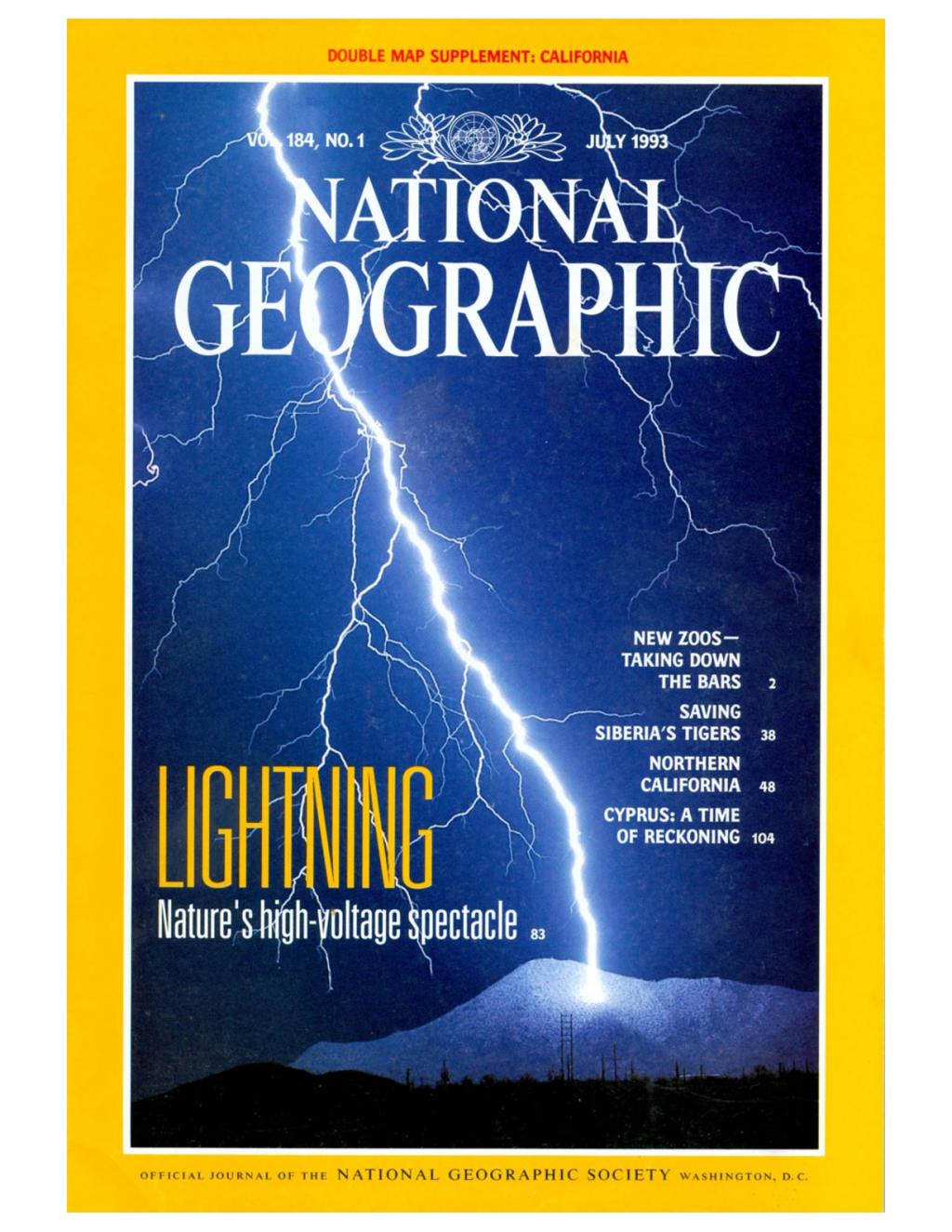