Nearly everyone will recall the following news heading which appeared in the daly press a few weeks ago:

The following paragraphs are from a letter written by Mr. Armstrong a few months before his death and addressed to the writer:

I quite approve of your undertaking to see that the name of Nikola Tesla is not forgotten and that he is accorded recognition for the very great things that he did. His inventions of the polyphase system of electrical transmission and the induction motor are the basis in the United States of our electric power industry, and the greatness of the Westinghouse Electric Company of today was founded on those inventions.

Not only did he teach by accomplishment, but he taught by the inspiration of a marvelous imagination that refused to accept the permanence of what appeared to others to be insuperable difficulties:- an imagination the goals of which, in a number of instances, are still in the realm of speculation.

In my “Appreciation” of the work of Tesla which came during wartime, there was much research under way toward reducing the Tesla concept of the guided weapon in various laboratories — I considered it inadvisable to draw attention to the subject by reference to Tesla's early concept of the matter. So far as I know, the credit for the concept rests entirely with him.

Mr. Edward Lind of Brooklyn, New York, has made a helpful suggestion concerning the organization of this journal — that of including a column where questions may be asked and answered either in the same or succeeding issues. Certainly, one of the most profitable ways for those interested in Tesliana to obtain relevant information would be through the medium that such a column will provide. Contributors to this column will become acquainted with the interests of others through the exchange of information, and also, they will be able to secure information from those who are particularly qualified to give an answer or opinion.

All questions, answers, advertisements, etc., submitted to this column will be presented unless otherwise indicated. 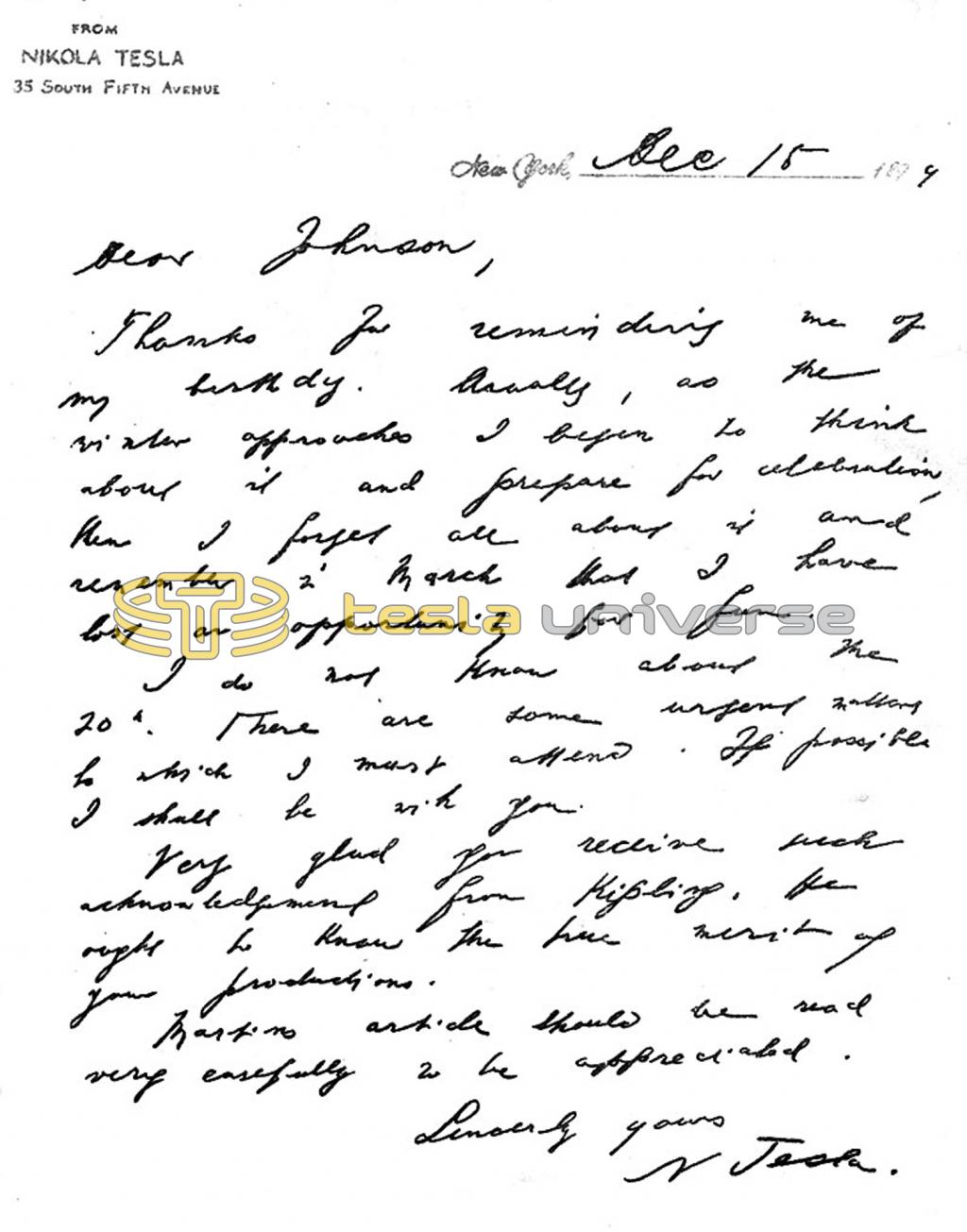 For those readers who may find Tesla's penmanship in the preceding facsimile a trifle difficult, the following line-by-line transcription is given:

Thanks for reminding me of my birthday. Usually, as the winter approaches I begin to think about it and prepare for celebration, then I forget all about it and remember in March that I have lost an opportunity for fun.

I do not know about the 20th. There are some urgent matters to which I must attend. If possible I shall be with you.

Very glad you receive such acknowledgment from Kipling. He ought to know the true merit of your productions.

Martin's article should be read very carefully to be appreciated.

Several readers may have noticed the striking advertisement presented by the General Electric Company which appeared in LIFE magazine for April 12, 1954, pages 98-99, and also in other current periodicals. “Most powerful ever made by man” was one of the paragraph headings describing the 15-million volt discharges produced in the G-E laboratory. Is it necessary to point out that not only were the G-E engineers preceded in their attempts at producing artificial lightning by nearly 55 years, but that they were exceeded in their results by the work of Tesla at Colorado Springs? Tesla was the first and only ever to produce electrical disturbances which, in magnitude and effect, exceeded the displays of natural lightning. He obtained currents of 1100 amperes under an absolute potential difference of 18,000,000 volts with an apparatus in which there is no practical limit to the intensity of electrical pressures obtainable, the “high potential magnifying transmitter.”

On the following page is a facsimile reproduction of a sketch drawn by Tesla. This sketch is from the collection of Mr. Walter W. Wilhelm of Chicago, Illinois, and appears with his kind permission. Mr. Wilhelm was associated with Tesla in 1917 at Tho Pyle-National Company in the development of Tesla's ultra high speed turbines. Perhaps in the near future we may be honored by a presentation from Mr. Wilhelm of a review of his experiences and work while associated with Tesla.

The sketch on the following page is dated January, 1917, and is drawn on the inside pages of stationery from “The Blackstone” hotel in Chicago.

A listing of references on the subject of the Tesla Turbine is given below for the convenience of those interested: 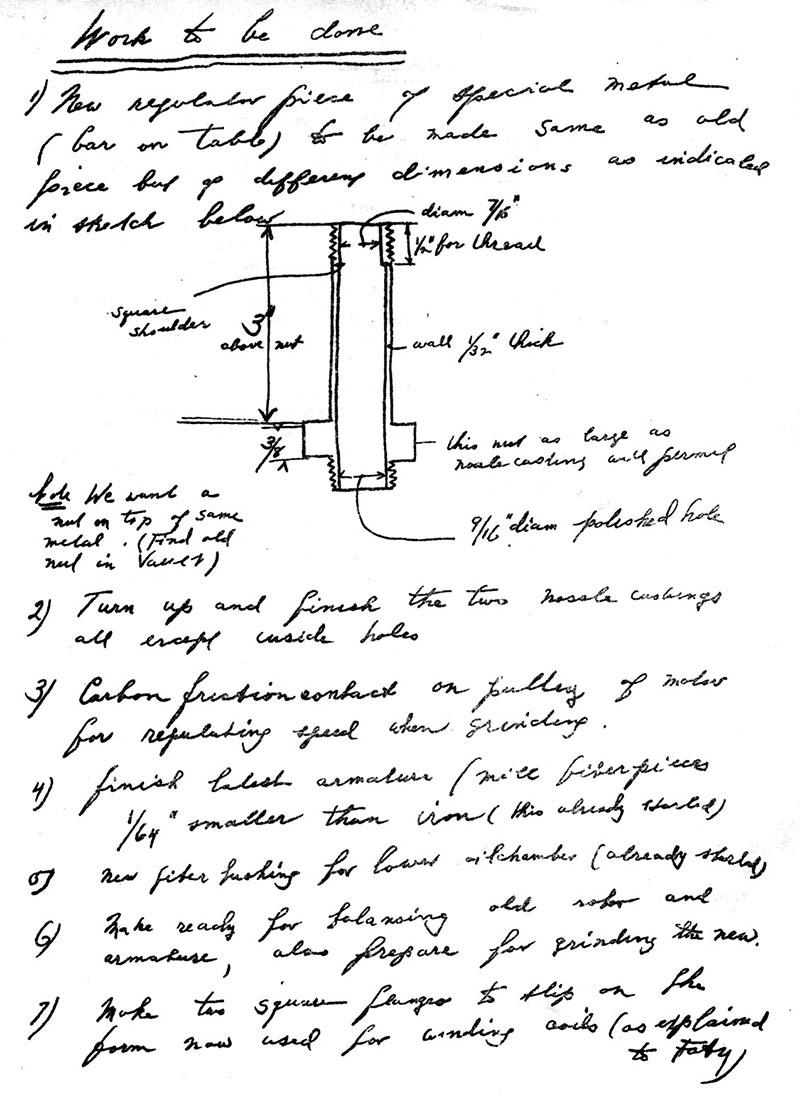 Mr. Thomas Commerford Martin, past president of the A.I.E.E. and known principally in connection with Nikola Tesla as editor of that classic volume, “The Inventions, Researches and Writings of Nikola Tesla,” once remarked in an article,*

“Servian poetry has so distinct a charm that Goethe is said to have learned the musical tongue in which it is written rather than lose any of its native beauty... Nikola Tesla, the young Servian inventor with whose work a new age in electricity is beginning, now dwells among us in New York. Mr. Tesla's career not only touches the two extremes of European civilization, east and west, in a very interesting way, but suggests an inquiry into the essential likeness between poet and inventor... A Slav of the Slaves, with racial characteristics strongly stamped in look, speech, and action, Mr. Tesla is a notable exemplification of the outcropping in unwonted form of tendencies suppressed. I have never heard him speak of a picture or a piece of music, but his numerous inventions, and the noble lectures that embody his famous investigations with currents of high frequency and high potential, betray the poetic temperament throughout. One would expect the line separating fact from theory to fade at the altitudes of thought to which his later speculations reach; but this lithe, spare mountaineer is accustomed to the thin, dry air, and neither loses sharpness of sight nor breathes painfully. Has the Servian poet become inventor, or is the inventor a poet?”

Tesla's unusual facility in languages and keen literary interest created a strong tie of understanding and friendship with several outstanding personalities in the literary world, one among them Mr. Robert Underwood Johnson, poet, diplomat, and editor of the CENTURY MAGAZINE. A love of poetry was shared by Tesla and Johnson, and in the May, 1894 issue of the CENTURY appeared a biographical article on Zmai Iovan Iovanovich, the chief Servian poet, by Tesla, with paraphrases from the Servian of Zmai after literal translations by Tesla and reversification by Johnson. In a prefatory note Tesla stated that,

“The poems of Zmai are so essentially Servian that to translate them into another tongue appears next to impossible. In keen satire free from Voltairian venom, in good-hearted and spontaneous humor, in delicacy and depth of expression, they are remarkable.”

In the February issue of the CENTURY for the following year appeared a ballad entitled, “Luka Filipov” which recounts an incident of the Montenegrin war of 1874. This ballad was again paraphrased from the Servian of Zmai, after literal translation by Tesla and reversification by Johnson. These poetic works and others have been included in various editions of poetry by Johnson, the most comprehensive being his “Poems of Fifty Years,” 1880-1930.

Let us examine the ballad,

So he urged him to the tent
Where the Prince was resting —
Brought his captive, shamed and spent
To make true his jesting.
And as couriers came to say
That our friends had won the day.
Who should up and faint away?
Luka Filipov.

The ballad of “Luka Filipov” is interesting in itself as a charming poetic work, but in addition it explains an amusing and perhaps somewhat curious oddity to those unacquainted with the history of the matter, in the notable collection of correspondence between Tesla and Johnson. Beginning in the year 1895, and during those following, the salutations of letters from Tesla to Johnson or his family would affectionately read, “Dear Luka,” “Dear Mrs. Filipov,” “Dear Filipovs,” etc. The origin of these nickname attachments for the Johnsons, which for a time was not clearly understood, is now easily seen in light of the translation of “Luka Filipov” and other works by the Servian poet known as “Zmai.”

The transcription of two letters from Tesla to Johnson which bear on the subject of the Servian translations and Zmai follow: (These items are from the collection of Mrs. James W. McChesney)

Thanks for attending to the matter also for copies of the magazine. Luka looks first rate in print. A number of persons have already spoken to me about it.

I do not know what is the matter with Zmai. He ought to have answered by this time. It is possible that owing to the political affairs the letters did not reach him or he may be ill. I hope the latter is not the case.

If I can manage will call Thursday, but I am very busy and can hardly spare a few moments.

The enclosed is bosh, Confusion might be produced but not in this way. You do not want to give Wells* ideas?! He has too many of his own. But if you are serious I might suggest a theme which will be at least scientifically correct.

Poor Zmai is dead. This time alas! It is true. Also our greatest writer of comical novels.......

With regards
yours,
Nikola

Tesla's poetic efforts embraced much more than translation however, and his ability in original verse has been, to say the least, most extraordinary. Unfortunately nearly all of his literary verse has drifted into private collections which, as yet, have not been made known. As it has been stated previously, one of the objectives of the Tesla organization will be to locate and catalog the various collections of Tesliana which are unknown. With the support of growing and interested membership, such an objective may soon be realized.

In regard to his own verse, Tesla wrote a little over twenty years ago,

“There is no sense in my verses But they are all up to date. They are just like those of Austin The new English Laureate!”

The following is a transcription of a rather humorous letter which Tesla wrote during his stay in Colorado Springs. In it Tesla makes a jesting remark concerning his “wireless” transmission of messages. —

Thanks at this late date for your typewritten remembrance. Complying with your request I send message without wire.

I see you are reading the New York Journal.

With kind regards to all the Filipovs

P.S.
Just finished putting up building to keep out the reporters. Did Mr. Gilder address your letter? Tell him my regards.

In the next issue, it is hoped that the theoretical and practical considerations which must be given to the design and construction of Tesla oscillators may be ready for presentation. Oscillation transformers which utilize the quarter-wavelength principle advanced by Tesla will be emphasized.

Contributions from readers are welcomed. 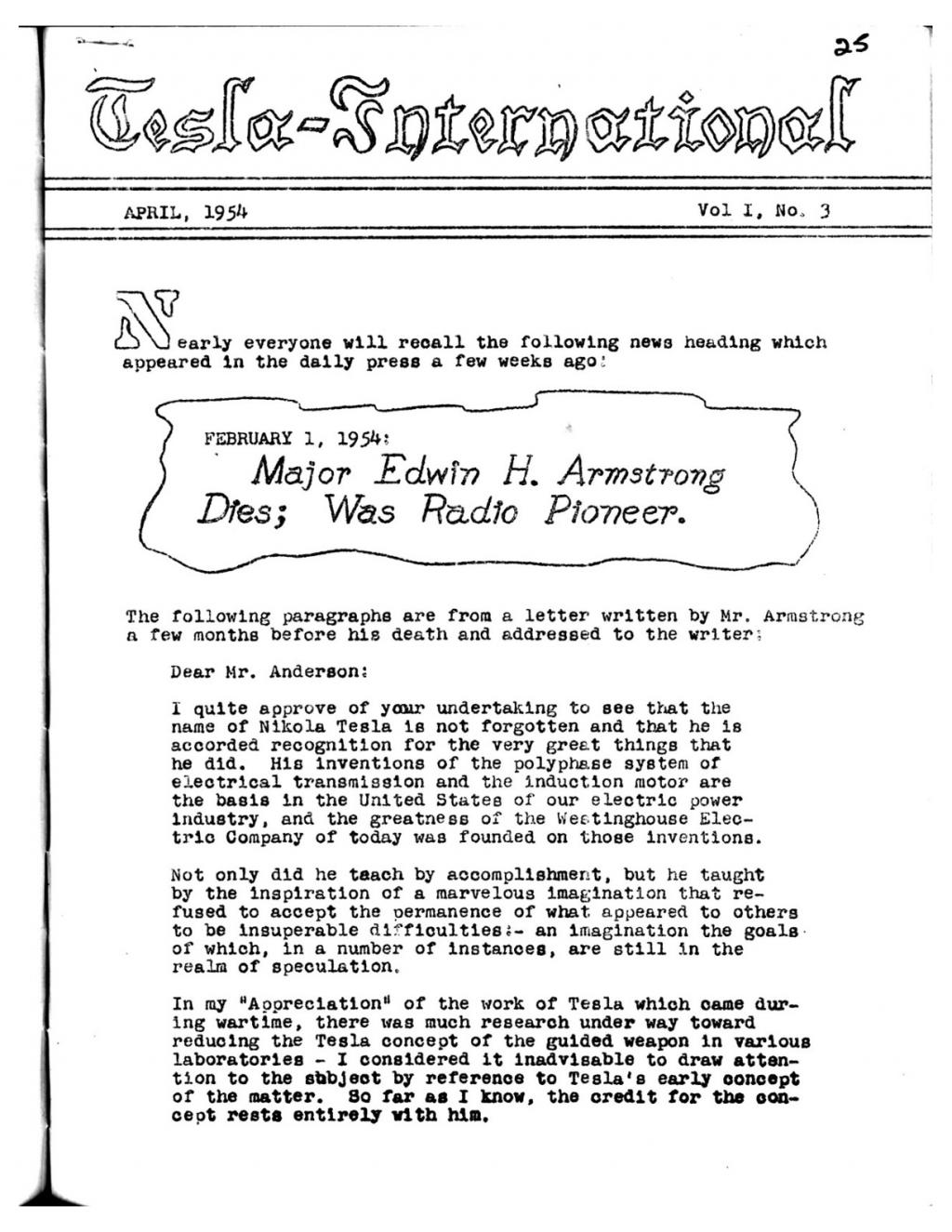