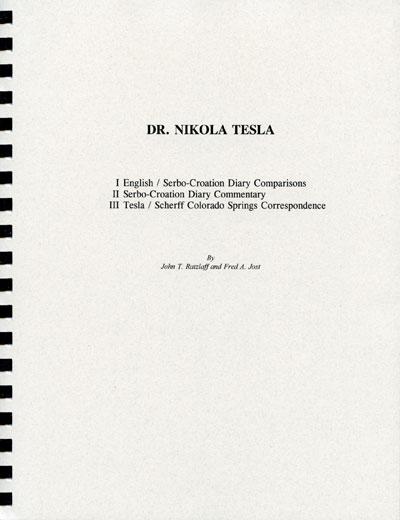 by John T. Ratzlaff and Fred A. Jost

The publication of Nikola Tesla: Colorado Springs Notes, 1899-1900, Nolit, Beograd, 1978, has created a marked interest in sections of the scientific community and advocates of the principles discovered by the creative mind of Nikola Tesla. In addition to detailed calculations and descriptions of portions of his experiments, notable achievements were accomplished in the detection of standing waves in the earth, the creation of ball lightning, and transmission of energy, without wires, to light a bank of bulbs at a distance of some 26 miles from the experimental power station. These feats have not been duplicated by others, which indicates that Tesla is thus far correct in stating that he was a hundred years ahead of his contemporaries.

The english text of Tesla's notes is incomplete, unfortunately, in a number of very important details. This supplementary publication includes additional important information to the 1899-1900 period. The initial publication of the 1899 notes in Serbo-Croatian included a commentary by Prof. Aleksander Marinčić on the daily work of Tesla, and is far more complete in important detail as compared to the Marinčić's commentary in the English version. There is no question that Prof. Marinčić was highly qualified to prepare the commentary. After a detailed comparison of the two texts, it is the opinion of the authors that the differences and omissions are direct clues to important areas of foreign research.

The first section of this publication deals with corrections and comments relating to the English text and also lists some of the differences in content.

The commentary of Prof. Marinčić from the initial Serbo-Croatian text is included in the second section. Several of the most important patents relating to the commentary have been included.

The third section is a compilation of correspondence between Nikola Tesla and his accountant, George Scherff, who was in charge of the New York laboratory during the absence of his employer. The subject matter relates directly to the Colorado Springs experiments, and adds additional detail to the 1899-1900 period.

It is intended that the supplementary information contained in this volume will provide additional insights into the important experiments conducted by Tesla, an appreciation for the total effort which was expended, and finally, a deeper understanding of the personality of this true genius.