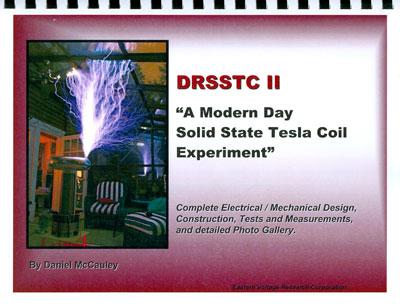 Solid state Tesla coils (SSTCs) have been around for quite some time now. From the first flyback transformer based SSTCs from the 1970's to the self-resonant full-bridge topologies of today, SSTCs have gone through quite an evolution. Until very recently, SSTCs have always had a unique output characteristic. A single think streamer (usually pointing upwards) making the distinctive low frequency hum we have all become accustomed to. But these SSTC output arcs were nothing like the arcs made by true spark type disruptive coils. However, this was all about to change.

About two years ago, Jimmy Hynes proposed a concept that would later revolutionize the SSTC world forever. This concept involved the principle of not only tuning the secondary coil to the solid state switching circuit, but also tuning the primary circuit to the solid state switching circuit as well. This would later become known as the DRSSTC, or Double Resonant Solid State Tesla Coil. Jimmy soon built a prototype and the success was clearly evident, at least to him.

For the next year and a half, the concept of the DRSSTC was discussed briefly on the Tesla Coil Mailing List (TCML). Jimmy Hynes even approached me at that time asking to try this new topology out on my current SSTCs. However, it appeared that no one really took the concept too seriously (including myself) or realized just how big a discovery this was. There just wasn't too much of a buzz created over this new and radical concept. All that would change, of course, in the spring of 2004.

In the spring of 2004, Steve Ward, who had already built a large number of SSTCs and was currently experimenting with pulsed (“interrupted”) SSTCs, had accidentally stumbled across the concept of the DRSSTC. Further discussions between Steve Ward, Jimmy Hynes and the 4HV Community confirmed this and Steve built his first DRSSTC. This coil was spectacular, producing 55" arcs which resembled a spark gap disruptive coil in every way. (Note: At the time, Steve had called his creation the ISSTC or Interrupted Solid State Tesla Coil, believing that it was slightly different than Jimmy Hynes' predecessor DRSSTC. However, just recently it has been determined that the DRSSTC and the ISSTC are identical in operation.)

Steve continued to publish his work, which included high quality photos and videos, on both the 4HV Community and the TCML and created a massive buzz within the Tesla community. I immediately began work on a DRSSTC coil (baselined from Steve's original design) which was to be the second ISSTC coil built using this exciting new topology. My goal was to verify the operation that Steve had acquired with this new topology, as well as perform extensive testing on the coils in an attempt to learn as much as possible. This paper discusses my simulations, designs, tests and measurements on both my DRSSTC I and DRSSTC II coils as well as designs and plans for my upcoming DRSSTC III system.