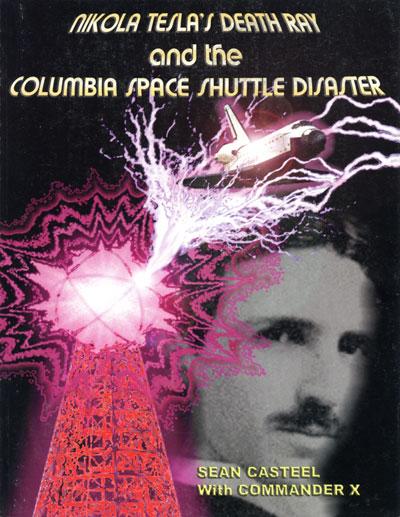 by Commander X and Sean Casteel

Was the Columbia destroyed by a partible beam weapon?

Did NASA issue warnings to the public about the danger of coming in contact with space shuttle debris in order to cover up the true cause of the Columbia disaster? Were they attempting to conceal the fact that a weapon first envisioned by legendary inventor Nikola Tesla over 60 years ago was the real culprit that brought down the ship and killed its seven astronauts?

Learn about the San Francisco photographer who took photos of the Columbia as it passed over the Bay Area. The photos, when developed, revealed anomalous flashes of purple light around the shuttle minutes before it was destroyed. NASA later confiscated the photographer's camera and flew it to Mission Control by a special jet. What did the camera contain that made it so crucial for NASA to possess it?

The book features an in-depth interview with world-renowned author, producer and Nikola Tesla expert Tim R. Swartz, who provides a detailed history of the inventor's Death Ray and speculates intelligently about its possible use as a weapon of mass destruction in our time. Another chapter deals with the rumored Soviet conspiracy to sabotage the U.S. space program, leaving a path of destruction in their wake that included eight U.S. rockets destroyed over a 19-month period. Were the Russians responsible for the Challenger disaster in 1986?

Also Includes: The full text of a 1940 “New York Times” article in which Tesla first unveils the invention of his “Death Ray” to a sympathetic reporter.

Did other scientists pick up where Tesla left off and create a super weapon the likes of which the world has never seen before?

Was a device Tesla intended to be used defensively developed into a horrifying offensive weapon instead?