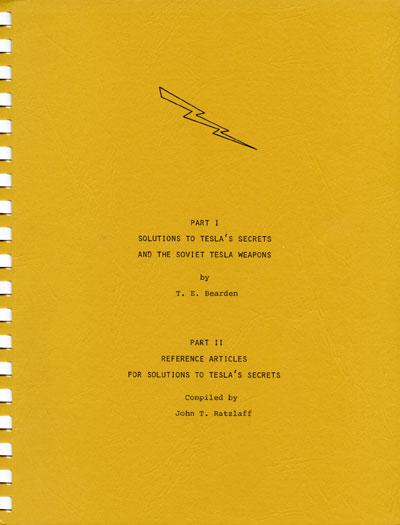 The long-searched-for Tesla secrets have been solved by Tom Bearden. Part I contains the specific description of the solutions to Tesla's secrets and the Soviet Tesla weapons.

The present electromagnetic theory has several flaws, and it is these errors that have hidden the long-sought unified field theory. The explanations presented by the author provide clarity and understanding to related Tesla writings and patents.

Before the turn of the century, Nikola Tesla had discovered and was utilizing a new type of electric wave. Tesla repeatedly stated that his waves were non-Hertzian, and that his wireless transmissions did not fall off as the square of the distance. The author has found that the wave which Tesla was using is a longitudinal scalar wave, capable of many times the speed of light. When coupled with another scalar wave (Tesla wave), the resulting vector wave can be the source of electromagnetic energy for electrical power, a protective force field, or a destructive weapon.

The booklet is well illustrated with special drawings by Hal Crawford. The bibliography includes corroborating information on all major points. Part II presents reprints or the entire subject matter of selected articles from the bibliography, plus additional references of importance. Articles are arranged in chronological order. Also included are nine patents by James Harris Rogers which were the basis of successful wireless communication during World War I. These principles of underground and sub-sea wireless were based on Tesla's discoveries.

Bearden's solutions are truly a major breakthrough, and an absolute necessity to the understanding of existing Tesla writings. It is also important that more should be known of this extraordinary individual, Thomas E. Bearden.

He is currently with the Alabama division of a large aerospace company where he is involved in determining the future requirements for laser weapons.

He has had direct experience with tube artillery and with the Ajax, Hercules, Hawk, and Patriot missile systems and the production of technical intelligence on Soviet surface-to-air missile systems for the U. S. Army/Department of Defense.

Tom holds a Sandan (third degree black belt) in Yoseikan aikido; is a singer, guitarist, and songwriter; member of Mensa, Society for the Investigation of the Unexplained, Vestigia, the American Association of Meta-Science; and is on the board of governors of the U. S. Psychotronics Association. In addition, he is Alabama Director of a small nonprofit foundation, the Association of Distinguished American Scientists and is a MUFON adviser on nuclear engineering.

He also edits Specula, Journal of the American Association of MetaScience.

Finally, Bearden's Solutions to Tesla's Secrets and the Soviet Tesla Weapons promises to be recognized in the future as a major contribution to our present technology.