The blue stock upon which this cover was printed has two points of significance. For one, it represents the depression one develops when spending the winters in the northeast. Secondly, it tears me up just to think of you guys in the sun belt busily working on your coils while my workshop is frozen shut. I won't get mad but someday I'll get even!

There has been some confusion about the method of payment here at TCBA. You pay for the newsletter after it is received. This makes you legible to receive the next issue.

The first check you sent, paid for the 1st issue you received. The second check paid for the 2nd issue, and so on.

If the present system does not work out, then we may adopt the standard annual membership system. Let's wait and see.

As Longfellow once wrote, “Into each life some rain must fall.” And things here at TCBA do not always go right. So if you feel slighted in any way or feel that you have a complaint, please let me know about it. I think you will find me a fair minded person. I make mistakes, too!

Although the July, August, September issue would mark the beginning of our second year, it was decided to begin the new year with a second volume. We hope to print 4 issues per year from now on. Best wishes to all you spark loving people.

To publish or not to publish, that is the question. It is to my benefit to keep the membership list private. But that would have defeated one of TCBA's noble purposes - communication. Publishing your name compromises privacy, and no doubt many of you have been contacted by those making use of this information. I'd like to be informed of any abuses experienced by the membership.

This issue of TCBA NEWS is dedicated to the late George Kaufman. Like yourself, Mr. Kaufman became fascinated by Tesla coils at an early age. He constructed many Tesla coils. The most imposing is permanently on display at the Buhl Science Center in Pittsburgh.

After his early years as a dare devil experimenter, Mr. Kaufman entered the field of electrical engineering. (See Tesla Coils On Display).

The Tesla coil on the cover of this issue is the one built by Mr. Kaufman.

The phone rang and a voice at the other end stated, “This is Mel Stuart, the producer of Columbia Pictures TV program, ‘Ripley's Believe It Or Not.’”

To make a long story short, TCBA was requested to supply a number of photographs for the segment on Nikola Tesla (shown here in the east on December 5, 1982). During the showing, I was able to identify 6 of the dozen or more submitted.

One of the interesting events was a short glimpse of TCBA member Ed Angell (who seems to own an amazing laboratory of high frequency apparatus).

Lester Edwin Reukema, 91, died at Good Samaritan Hospital Friday after an extended illness. A resident of Berkeley, Calif., he had been visiting his daughter, Leona Converse of Corvallis, at the time of his death.

He moved to California and served in the Navy during World War I aboard the U.S.S. Oregon. He attended the University of California at Berkeley, where he obtained his bachelor's, master's, and doctoral degrees in electrical engineering. He joined that faculty in 1926. He taught and conducted research there for 32 years before retiring as professor of electrical engineering. He was a fellow of the American Institute of Electrical Engineers and of the Institute of Radio Engineers. After his retirement, he organized lecture courses for Bell Telephone System engineers for several years. 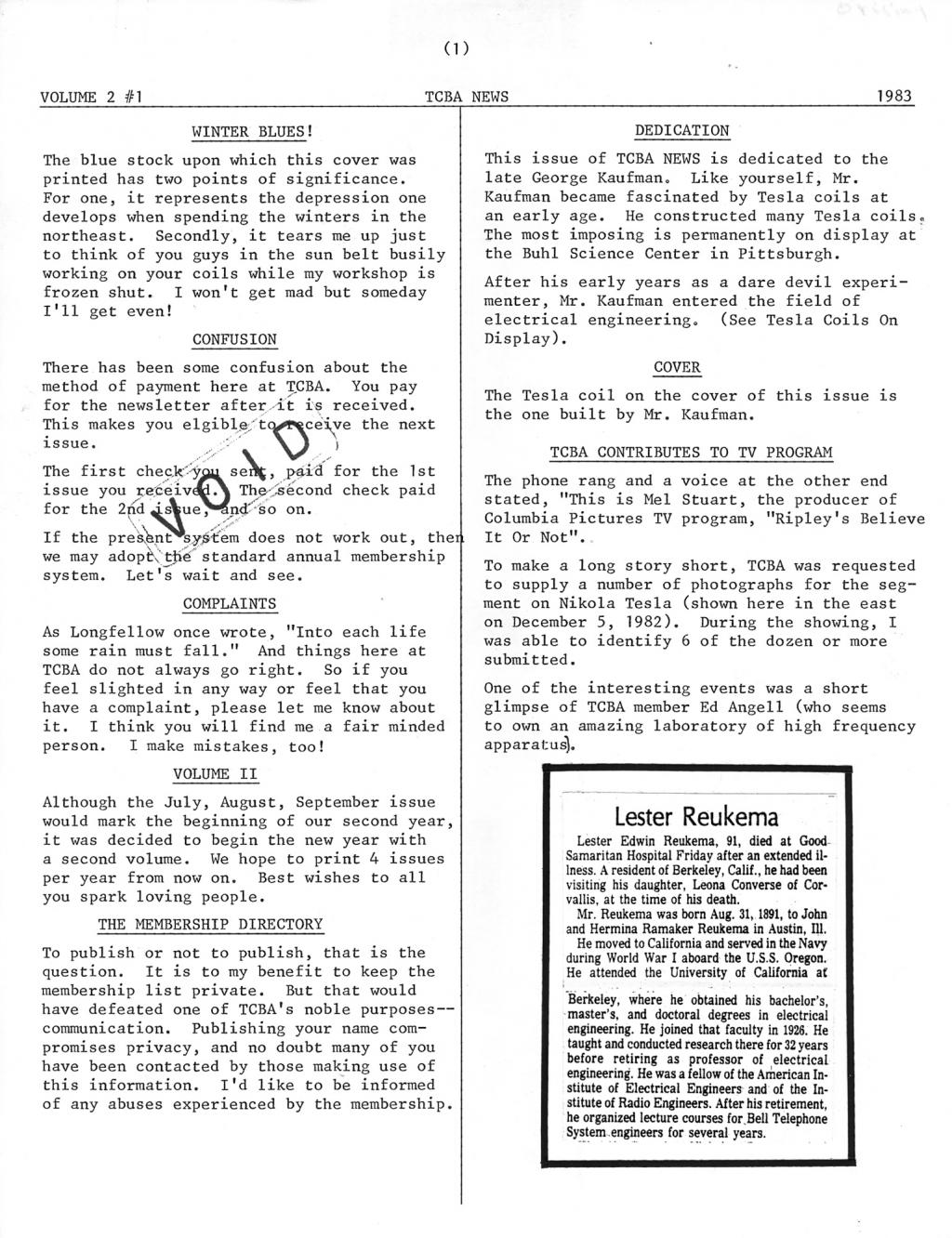