Historical Background
Nikola Tesla built one of his greatest dreams on Long Island. When he began in 1900, much of the island was still wilderness mixed with a few farms, heavily forested with some small, quaint communities scattered across its 125 mile length. Yet it was close enough to New York City to be an attractive destination for many vacationers at the time. It was also attractive to Tesla, since he knew that building a wireless electrical transmission tower there could serve a great many people. He worked on this until about 1907, when his funding was cut off by J.P. Morgan. The tower itself was demolished in 1917, but the laboratory building is still standing today.

Over several years Tesla built the spectacular and enigmatic mushroom-shaped tower at Wardenclyffe, on the North Shore where it could easily transmit power and communications for several states. Drawings at the time show lights emanating from the tower and great zeppelins cruising nearby, presumably running with electric motors powered by the great system. Tesla’s Tower was even designated as a landmark on Coast Guard maps during that era.

In October 2006, a pioneering conference was held close to Wardenclyffe, at the Hampton Inn off the Expressway. Several people who attended the conference went up to the Wardenclyffe site for short visits. The conference was put on by the Long Island based organizations Friends of Science East Inc. and The Tesla Wardenclyffe Project, with help from longtime Colorado based researcher Gary Peterson.

Long Island is now a unique environment. In some ways it is isolated from the rest of the world, but its proximity to New York City puts it near numerous planetary communication lines. It can be regarded as its own little world of 3 million people, where visitors will be corrected several times a day: “It’s ON Long Island, not IN Long Island!” Most of the area east of Queens was built up after 1955, making the character of the island seem modern and mostly clean. Residents now tend to be well educated and affluent, with some exceptions. Awareness of Tesla’s work is thus somewhat higher than in most places.

Several local politicians showed up Friday morning at the nearby Brookhaven town hall and gave their blessing to this meeting. They included Town Supervisor Brian X. Foley, Town Councilman Kevin McCarrick, Suffolk County Legislator Daniel Losquadro, and Shoreham Civic Organization President Mary Daum. They were all welcomed by local conference coordinator Jane Alcorn. Ths public session was in itself extraordinary, as it brought together several levels of government with a variety of community activists. Anyone who has spent much time on Long Island knows how complex the governmental structure is there, and how difficult it can be to get members of various groups working together. Some sponsorship was provided by the Long Island Power Authority, which in its own way was a significant milestone. This all showed what a broad spectrum of people have become interested in the work of Nikola Tesla and its possibilities for the future.

Many of these people want to preserve the historical site, and thus the story of what Tesla was trying to do there. Also, there has been much discussion in recent years concerning the development of this historical presentation effort into broader community based educational efforts. The Brookhaven area is home to many prominent mainstream scientists, and some of them are demonstrating interest in and support for these possibilities. Working laboratories, classrooms, and a museum have all been discussed.

Presentation Overview
Marc Seifer, who is to date Tesla’s best biographer, presented excellent data on Tesla’s life, including relationships with architect Stanford White, designer of his laboratory, and J.P. Morgan, who financed and then abandoned him at a critical point during the development of Wardenclyffe. (His book, Wizard: The Life and Times of Nikola Tesla is available from TeslaTech.)

Bill Wysock is generally recognized as one of the world’s greatest Tesla Coil builders. He came all the way from California, and while he couldn’t bring any of the legendary equipment used in movies and at the old International Tesla Society conferences, he gave us some excellent perspectives on the technical points involved with coils.

Bill also brought a fascinating antique wire-wound coil which he referred to as “my most priceless possession”. One especially significant thing he said was a warning that those who work frequently with coils should be aware they can cause nerve damage. We know that small amounts of electricity can be healing, so it makes sense that larger amounts might cause problems. Bill wants to make sure future researchers avoid potential negative health effects.

Gary Johnson, Kenneth Corum, James Corum, and Gary Peterson provided deep technical and mathematical information about many aspects of Tesla’s electrical work. Those who have followed Tesla related research for a long time are familiar with the Corum brothers. They were well known from the time of the first International Tesla Society conference in 1984 and many years afterward for their intense mathematical proofs of Tesla’s experiments. At this conference, they provided some excellent illustrations of several experiments they had performed in the past, which were especially helpful. Gary Peterson’s presentation can be viewed at http://www.teslaradio.com

Jim Hardesty from upstate New York was able to bring a number of fascinating antiques and reproduced static electricity machines. This type of experimentation has been largely forgotten, but it was the bedrock on which Tesla’s work was built. Gaining an understanding of static electricity phenomena is thus a great help in replicating Tesla’s work and for building new devices. Also known as “Wimshurst devices” these things make great subjects for photographs and videos. Some of the demonstrations involved flying hair, and some showed sophisticated, little known technologies such as spark gap radio transmission. Jim Hardesty’s web site is http://www.arcsandsparks.com

Major Demonstrations
On Saturday night Jim Hardesty, Gary Peterson, and Bill Wysock put together a stunning demonstration of equipment. One of the pieces was a 1/35th working scale model of the Wardenclyffe tower, showing some of the basic operating principles. This model was based on many years of study, but was built quickly. Its top was made of styrofoam which had been assembled beforehand at Gary’s Colorado laboratory. Wood, wire, aluminum foil, and other parts were mostly purchased locally and assembled in the hotel just before the conference.

Tesla had stated that the Wardenclyffe tower was designed as a transatlantic telecommunications facility. He called this the “ground and air method”. Some researchers have speculated recently that Tesla was emphasizing the communications capabilities of this project over the power generation and transmission possibilities in order to continue receiving funds.

During the demonstration a few men were literally crawling around the floor getting all the ground wires right. This was a good illustration of Gary’s statements about how important grounding is to this process. Under the tower, Tesla had built many long tunnels designed to be filled with seawater for this purpose. They have not yet been fully explored.

A simple receiver, represented at the demo session as an aluminum foil curtain mounted above a Tesla receiving transformer, was designed to bring in electricity for common use. Gary made it clear that tuning is the most important part of this process. For a few moments a small lamp was lit in the air near the tower, using a small coil antenna. Considering that much of the model had been assembled at the last minute, and all the grounding problems, we were all amazed to see this working proof of Tesla’s original concept.

Jeff Behary, founder of The Tum Of The Century Electrotherapy Museum gave his usual excellent presentation on his work. He explained old-fashioned diathermy, and went through a number of excellent illustrations.

One little known fact about Tesla is that he invented many things which were not electrical. One such was the Tesla Turbine, which is gaining increased acceptance worldwide. Nikola Skulic’ from Chicago brought a working unit He also told us fascinating stories about his visit to Yugoslavia, where he was welcomed due to his interest in Tesla. Nikola speaks Serbian, which gave him special insight into Tesla’s roots.

Hopefully there will be more conferences on Long Island, along with development of a museum/science center open to the general public. This conference gave a lot of momentum to these endeavors. Reportedly many discussions at a number of governmental levels are continuing, and everyone involved is excited about possible results. 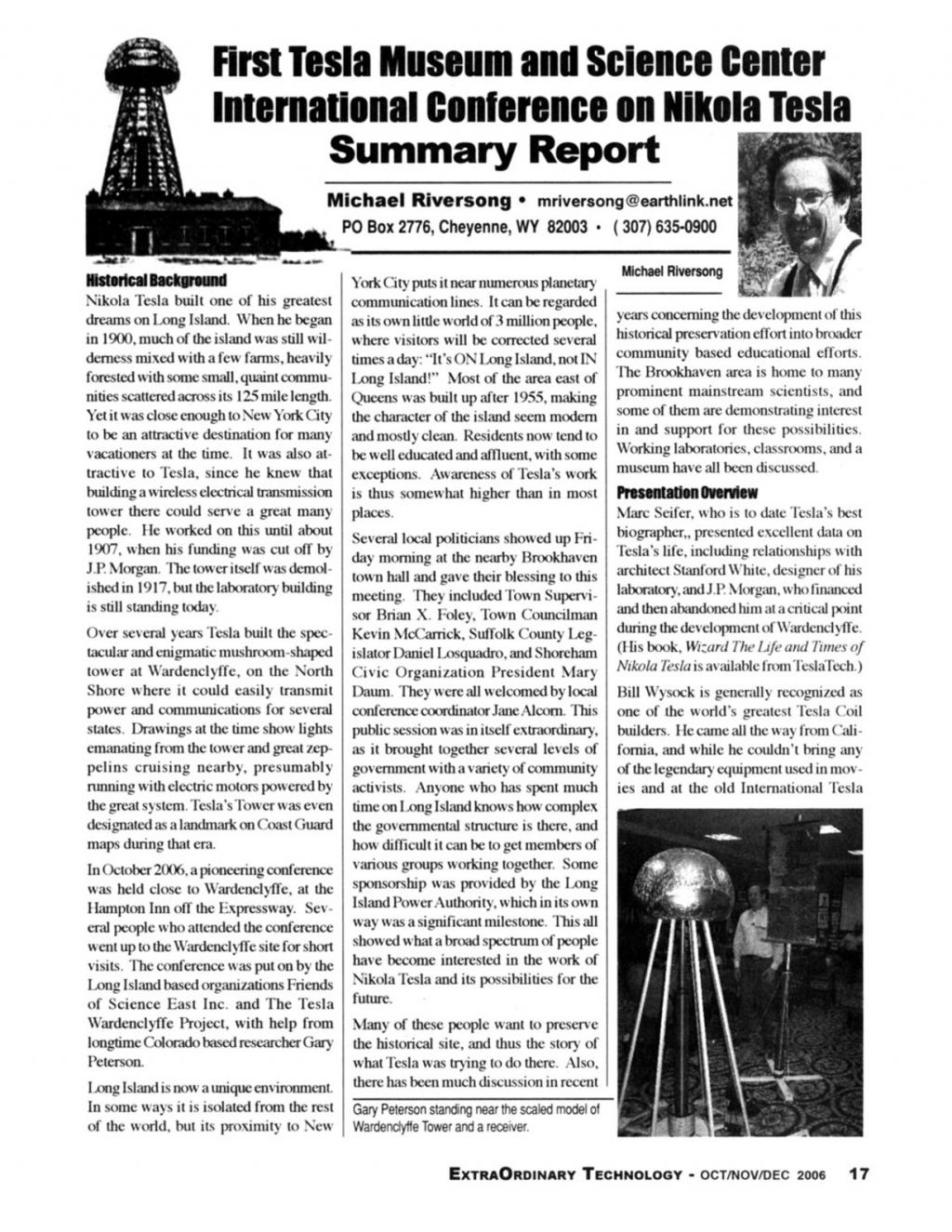