With this issue begins a project that has been under consideration for a long time — a forum for Tesla coil fans.

The thought of such an organization as TCBA occurred as far back as the 1950's. I hope it moves a bit more quickly from now on.

Considering that there must be thousands of Tesla coil fans in just the U.S., it seems logical that some form of organization should exist in their behalf.

The primary purpose of TCBA is to locate and identify the many people who are into Tesla coil work so that there can be some form of communication and knowledge sharing between them.

For the time being, TCBA News has no publication schedule. I plan to play it by ear and hope to put out 2-4 issues per year. That depends, of course, upon the response from TCBA members.

The cover for Volume 1 is a reproduction from the March 1925 issue of the EXPERIMENTER, (see page 4)

Any errors in TCBA News are solely due to my own limitations. Unless you are a purist, please be tolerant.

The Tesla Coil Builders Association is a non-profit and unaffiliated group of people who have a common interest in the theory, design, construction, and function of high frequency transformers known as Tesla coils.

The main purpose of TCBA is to act as a central headquarters for the collection and dissemination of information on the subject.

What TCBA Is Not

TCBA is not a Tesla society. While the membership holds an interest in the contributions of Nikola Tesla, the organization is not dedicated to the promotion of Tesla's fame.

TCBA is neither political nor does it have any ties with commercial or religious institutions.

Accompanying this issue is the first printing of TCBA's membership list. Although it may be small in comparison with other rosters of this type, it is bound to grow.

The purpose of the directory is to promote communications between people who are into Tesla coil work. Use of listed names outside of TCBA's purpose is not authorized.

Steve Caldwell, engineering student and resident of the great State of Tennessee, was the first official member to be registered in the TCBA Directory.

Just about every letter that comes in begins in a similar fashion — “I made a Tesla coil back in....”

For member Thorn L. Mayes, it was 1922. My TC experience began in high school in the late 1930's. Among the members listed in the Directory is a youngster in his late 70's. That sort of makes some of us “Johnny Come Latelys.”

Along with letters of support have come a number of small donations. One contribution was made in the form of a Tesla Bibliography that was published by Ratzlaff and Anderson. This is an excellent publication for Tesla coil research.

Another surprise was the appearance of an advertisement on behalf of TCBA by an anonymous donor. These kind gestures are greatly appreciated.

While this is being typed, California has provided more members than any other state. I've always considered CA. to be the hub of TC activity. So why didn't you guys form a TCBA!

One of the things that has always bugged me has been the undeserved fame achieved by the French electrician known as Oudin. As you know, the Oudin coil is a unipolar high frequency transformer. That is, only one terminal is active with sparks—the other being grounded. Tesla clearly described this arrangement in his 1891 lecture at Columbia College (see Inventions, Researches, and Writings of Nikola Tesla, figure 112b, page 170). Written by T.C. Martin in 1894, now available in reprint. 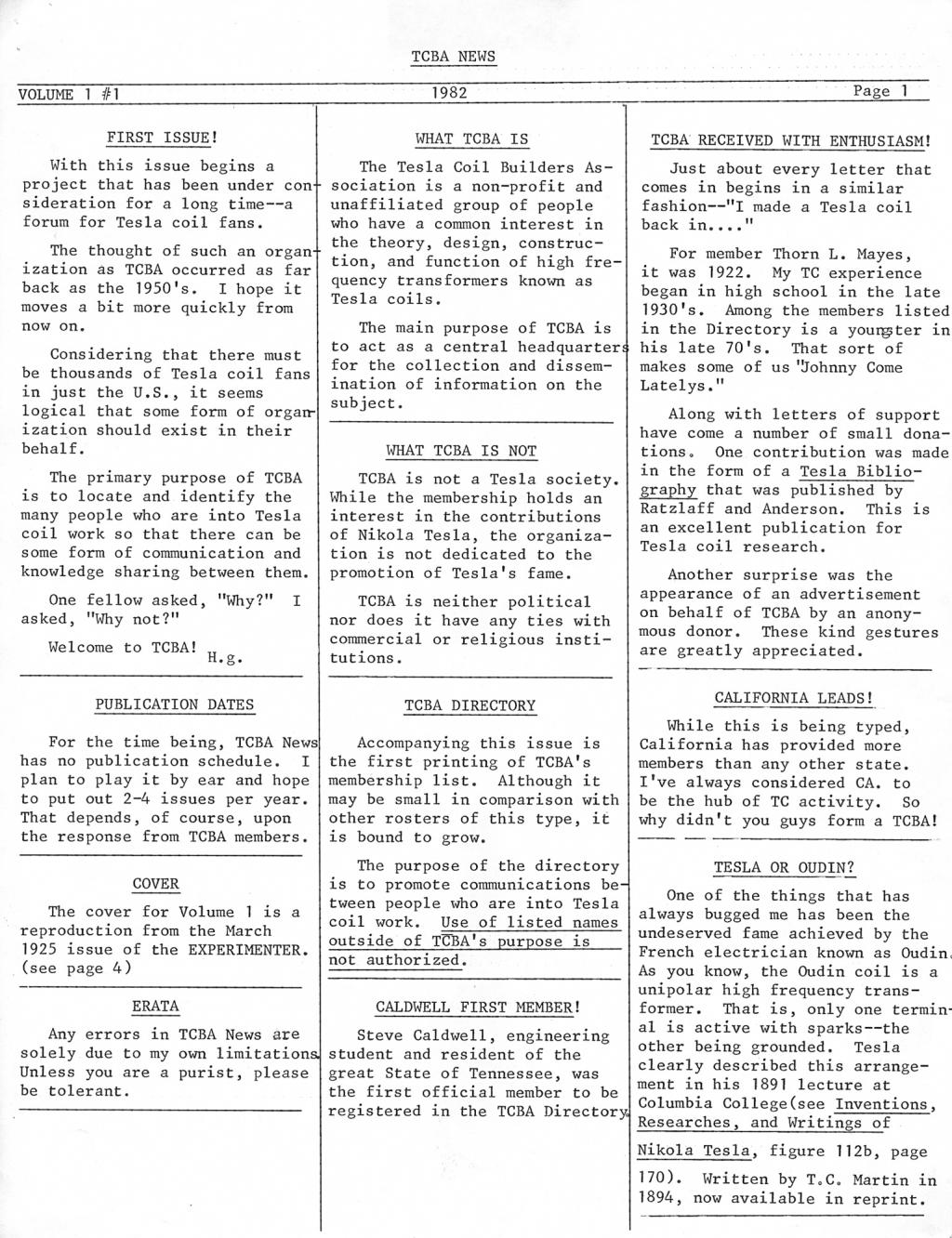