Now, as the surges of current pass back and forth through the coil (L1), a magnetic field is set up which links with the large coil (L2) and induces a current in it. If the natural frequency of the circuit formed by the coil (L2) and the capacity (C2) which is f2 = 1/2x3.1416 √ L2 C2 many circuit (f1), then large oscillations of current will be set up in the secondary circuit, and these oscillations passing through the high inductance of coil (L2) generate enormously high voltages. These high voltages, being impressed on the ball or other capacity (C2), break down the surrounding air, causing the discharges of flame seen in the pictures. As soon as the energy of the primary circuit (L1 C1) has been handed over to the secondary circuit (L2 C2) the arc across the gap (S.G.) goes out, allowing the condenser (C1) to again build up to the maximum voltage, when the cycle repeats itself.

What has taken several minutes to say occurs in less than a ten-thousandth of a second, since the natural frequency of each circuit is about 60,000 cycles per second. About five cycles are necessary to pass the energy from primary to secondary circuit. The frequencies f1 and f2 must be equal, which means that L1 x C1 must equal L2 x C2. Since the inductance L2 is fixed, being determined by the dimensions and the number of turns of the large coil, and C2 is fixed, being determined by the size of the ball or man used as a capacity and by its distance from surrounding objects, the frequencies are equalized by varying either L1 or C1. C1 is varied by varying the number of milk bottles used, 144 bottles giving us best results. L1 is varied by varying the number of turns used. When the frequencies are equal, the system is in resonance. The particular value of L1 to use with any value of C1 is easily determined by trial, merely shifting the movable connection on coil L1 until a maximum discharge is obtained from the ball C2.

According to the safety commission of California, one-tenth of an ampere of current passed through a man's body at ordinary frequencies will cause death. Yet, in our experiments, we pass enough current over and through the body from feet to hands to brilliantly light up several incandescent lights held in the hands. Since each wave train of energy lasts only about one five-thousandth of a second, to be followed by an interval of about one one-hundredth of a second before the next wave train comes along, at the beginning of each wave train about 200 amperes of current must be passing through the body, 2,000 times the amount which might kill at lower frequencies. Moreover, at commercial frequencies, anything over 1,000 volts is dangerous, and even voltages as low as 110 volts have killed persons many times. Yet we are impressing a million volts and more on a man's body without any danger. What causes the difference?

The higher the frequency, the less chance the current has to penetrate the conductor, whether that conductor be a copper wire or a human body. At 60,000 cycles, the frequency used in our experiments, practically all of the current passing through a half-inch wire is carried along the surface, only a negligible amount penetrating the wire more than one one-hundredth of an inch. This is the so-called “skin effect” of high frequency. In the same way the human body carries the current on the surface, the high frequency preventing any penetration farther in than the outer layers of the skin.

Certain precautions must be observed. Keep the body insulated, and far enough away from direct grounds to prevent power arcs to ground, which, though not dangerous, are unpleasant. Also remember that the circuit between the power transformer and the condenser (C1) is carrying power at 60 cycles and at high voltage, so must not be touched; it is well not to touch any part of the primary circuit when the power is on. However, the energy in the secondary circuit is perfectly harmless. 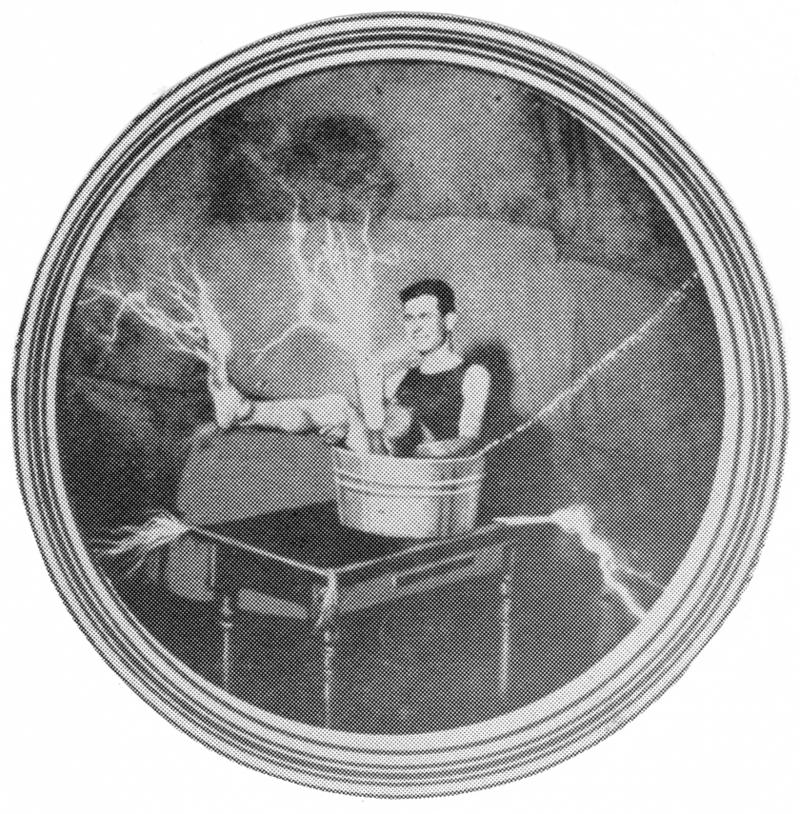 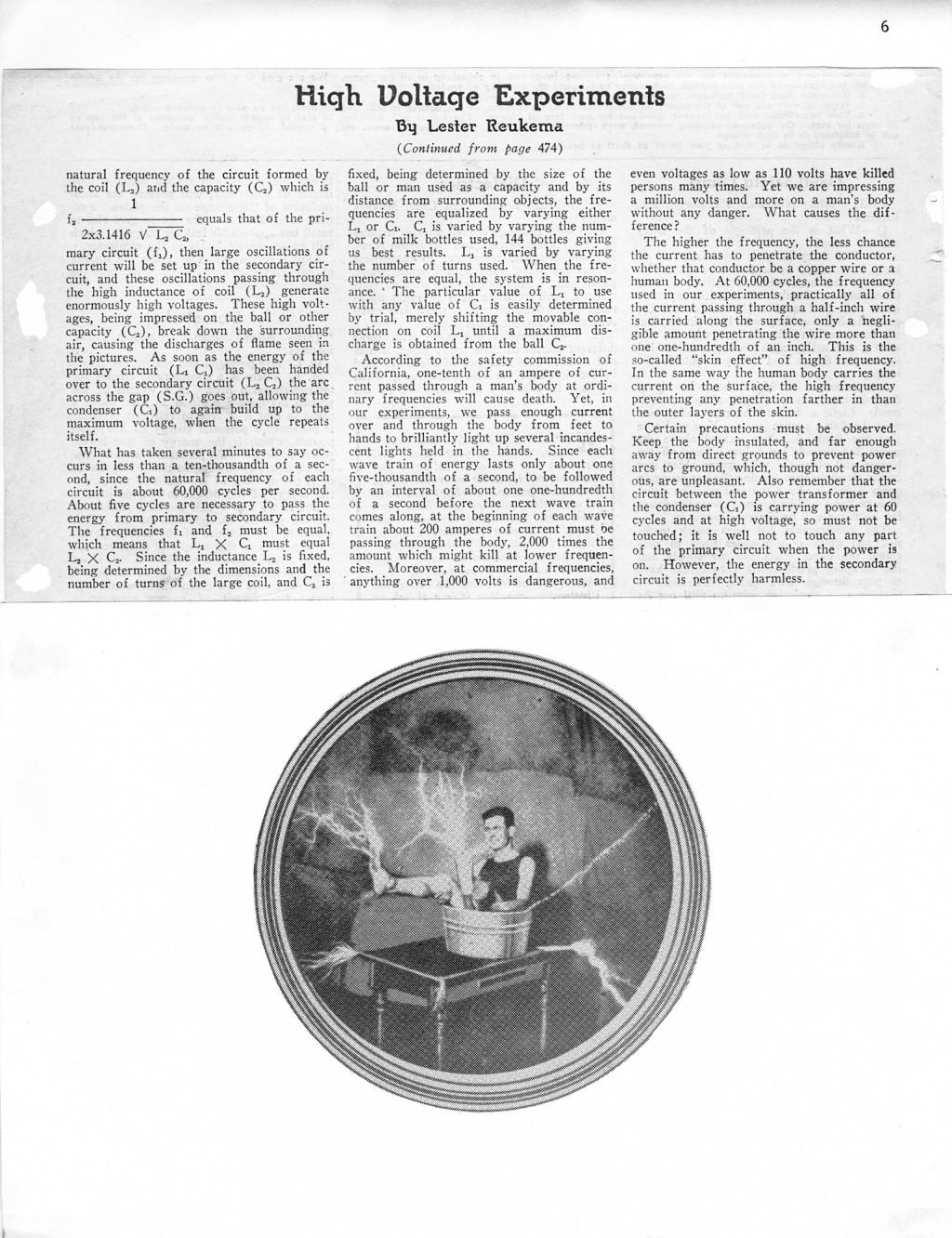