Nikola Tesla: The Greatest Inventor of All Time?

by Bob Sloan
Beyond
Page number(s):
8

United States Patent #514,170 describes an incandescent light bulb, one Which produces light in exactly the manner employed by the sun. This simple mechanism, inexpensive to produce, will generate 20 percent more light than a common household bulb using the same amount of voltage.

Where can you buy this lovely little energy saver? As hard as it is to believe, here in the age of the energy crunch, you can’t buy it anywhere. Even more incredible is the date of the patent: February 6, 1894!

The bulb’s creator, Nikola Tesla, is likely the greatest inventor of all time. His trail-blazing work from 1860-1930 changed the world dramatically. It was Tesla, not Edison, who discovered every principle and invented every device for the alternating current we use today. Tesla, not Marconi, invented the radio and every one of its components. He pioneered work in fluorescent lighting, bladeless turbines, the point electron microscope, the cyclotron, guided missiles, robots, computers and broadcasting. (In later years scientists shamelessly accepted credit for these devices that was due only to Nikola Tesla.) He created lightning and earthquakes and employed the earth in his experiments as if it were nothing more than another piece of laboratory equipment. It is impossible to understand why he is not duly honored as one of the greatest scientists of all times.

Tesla possessed a special gift of visualization that helped him to stampede through the new territories he was discovering almost daily. Even as a child, if someone spoke, for example, of an apple, he would actually see that apple. He could only tell it was not real by passing his hand through it. At that time, he felt the gift was a curse. Later, when he began to take advantage of his talent by astounding his math teachers, he began to realize he could utilize his vision as a scientist and inventor.

Tesla decided to study the fresh and exciting new field of electronics. It was while in college in Belgrade, studying electronic engineering, that his gift came to fruition. During a lecture on the direct current (DC) motor, Tesla stood to tell his professor that an alternating current (AC) motor would be more efficient for several reasons. The prof, somewhat irked, told Tesla testily, “You are correct. However, it is well known that it is quite impossible to make an alternating current motor.”

At that moment, Tesla had one of his moments of vision. Somewhere in his mind, he solved the enigma that had eluded the best scientific minds of the time. He saw clearly the AC motor running smoothly before his eyes. He blurted out, “No sir! It is possible!”

The next day the wise professor thoroughly embarrassed Tesla by proving beyond a shadow of a doubt that AC motors would never be made. Fired by this challenge, Tesla worked relentlessly fifteen hours a day (as was his habit throughout his career) to prove what he already knew was true. A few years later, he had made the first AC motor.

Tesla felt that his momentous discovery would bring him instant wealth and fame. Such was not the case. Frustrated in his attempts to find European support for his device, he came to America with a letter of introduction to Thomas Edison, already recognized as the father of practical electrical energy. One would think that this meeting between monumental minds would be a great occasion. It wasn’t even close.

Edison had invested heavily in DC current. AC current would instantly outmode his developments, as it was more efficient and could be transmitted at far greater distances and in larger quantities than DC. The last thing he wanted to hear was that someone had made AC power practicable. Edison dismissed the talk of AC inventions summarily. He gave Tesla a lowly job as a technician. Tesla soon quit after being cheated out of $50,000 by Edison.

Three years later, Tesla sold his fundamental patents for every device needed for alternating current production and transmission to the Westinghouse Electric Company. The price, one million dollars, turned out to be one of the great bargains of all time. By 1896 the first Niagara Fails power plant was built with equipment designed by Tesla. Soon AC current had lit America and set it in motion. So advanced was Tesla’S design that it remains the standard for electrical power production to this date. His work was so thorough and meticulous that it has never been improved upon.

From this point on, Tesla’s work became so advanced that, if he were born today, he still would have been ahead of his time. His discoveries were always of the first magnitude. No mere inventor, he unearthed the principles of electricity, found the potentials of nature, and incorporated them into his inventions. Though he had no fewer than 200 inventions, each one of which could have made him a multi-millionaire, he refused to be bothered with the necessary transactions to convert his ideas to dollars. He delighted in impractical and expensive experiments that represented science for the sake of science to the highest degree. His work came to rely on the generosity of philanthropists rather than the investments of industrialists.

Tesla, tall, handsome and personable, perfect in manners and dress, became one of New York’s most flamboyant and well-liked figures. The elite of society came to his laboratory at an instant’s notice to see the wonders he created there. Lighting was supplied by glowing tubes that were connected to no wires. One merely placed the tubes wherever light was needed. With the snap of his fingers, Tesla would create instantaneously a ball of leaping red flame and hold it calmly in his hands. He let the flame run over his clothing and hair, then dropped it into a dumbfounded quest’s lap.

Mark Twain was a close friend of Tesla’s who used to delight in a vibrating platform in the laboratory. The platform, set in vibration by an oscillating device small enough to fit into a pocket, imparted a feeling of great vigor to anyone standing on it. One day Tesla had the idea to bolt the oscillating device onto one of the structural beams of the building housing his lab. As he watched the gadget build up speed, he did not know that he was creating the biggest earthquake in the history of New York. The tiny motor broke windows and pipes, knocked down walls and moved heavy motors off their mountings. The police, long used to the strange sounds, lights and vibrations emanating from Tesla Laboratories, sped to its doors on quivering streets. They burst into the lab just in time to see Tesla smash the oscillator with a sledge hammer. It seems his own building had started to shake last.

Periodically, Tesla would take time from his ever-intensive research to present lectures and public demonstrations. His lectures, given before the leading scientific institutions, were as carefully crafted and magnificent as his inventions. He never repeated a lecture and for each occasion he demonstrated a new bevy of inventions, the likes of which the world has never seen before or since. The incredibly advanced state of his work, the breathtaking discoveries that he casually revealed, left even the best scientists dumbfounded.

Tesla showed a flair for drama in his public demonstrations. Once, to disprove Edison’s claim that AC current was too dangerous, he passed one million volts of AC current through his body and melted an iron bar he held in one hand. At a Madison Square Garden demonstration, he revealed the first robot: a model boat that Tesla put through a whole series of maneuvers using a remote control device. At the time, the wireless transmission of energy was thought to be impossible.

Tesla’s greatest invention may have been his device for wirelessly transmitting energy around the world. Free from the energy-robbing friction of carrier wires, the system made use of the earth’s own electrical potential to transmit electrical power safely and vastly more efficiently than even his own alternating current system. With this device, Tesla knew that he could supply the world with electricity using only three transmitting stations placed around the globe. To obtain electricity, one would only have to drive an iron rod into the ground and attach a simple device to it to convert the energy into a usable current. The plan, though proven workable, was never employed. Tesla could not supply potential investors with an answer to the question, “How could compensation be collected for the services rendered?”

Tesla loved these projects of global scale. He stated, and it is very likely true, that he had perfected a plan to light the night skies of the entire world with a single device. Though the machine was never made, such is the respect for Tesla in scientific circles that it is generally agreed that he could easily have performed this miracle. Any task presented by his marvelous vision could be done.

Another of Tesla’s many great accomplishments was the generation of 100,000,000 volts of electricity. No scientist since that time has produced one tenth that amount. Incidentally, one of the devices employed in this generation was to become standard equipment on the sets of horror movies. It was the Tesla coil that made the giant bolts of lightning that arced through Dr. Frankenstein’s laboratory.

For a number of reasons, most of Tesla’s great discoveries were lost to the world. Blessed with total recall, he never bothered to write things down. Not only was it unnecessary for him, but it provided maximum security against invention-stealing. Tesla fully expected to live 125 years. He had decided to devote his first 100 years to research and then write his autobiography and chronicle his most secret discoveries. Unfortunately, Tesla was stricken with senility before the age of 80. To the great loss of mankind, he never finished his writing project.

At his death, in 1943, what papers he did have were confiscated by the FBI. These papers remain sealed from the general public to this date. Their contents are totally unknown, nor has it been revealed whether the U.S. Government has made use of them.

Tesla was, by choice, celibate his entire life. He thought of himself as a superman whose energies were not to be wasted on useless emotion. He lived totally alone, confiding in no one. He left no heir to those unique genes that made him a giant among men.

Even though only a fraction of his total knowledge survives, he was still able to make incredible contributions to the world. And to this day, scientists are rediscovering the principles that Tesla knew a century ago. Tesla showed what was possible, so it only remains for science to find out how he did it. 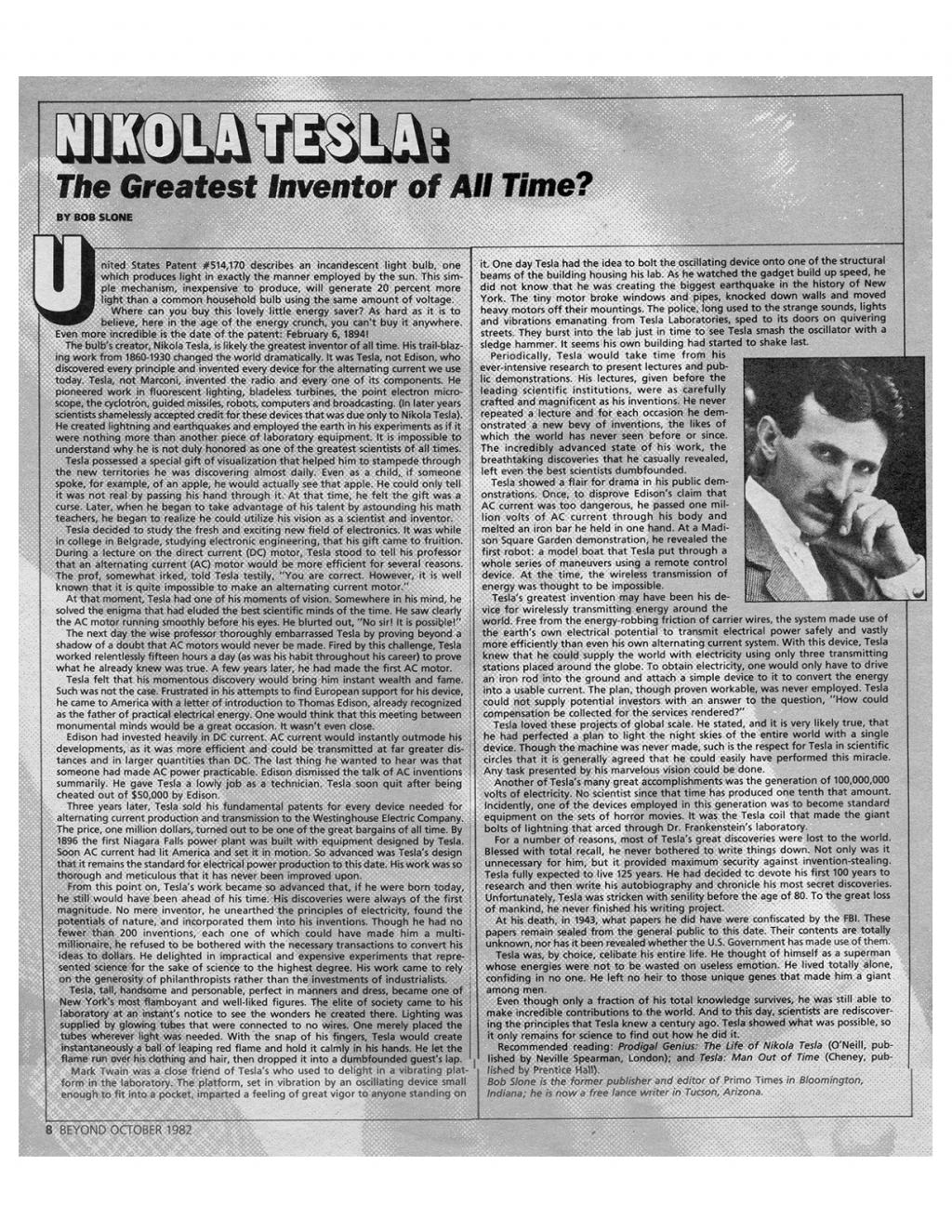