November 8, 1998 marked the 100th anniversary of Nikola Tesla's patent #613,809 - METHOD OF, AND APPARATUS FOR, CONTROLLING MECHANISM OF MOVING VESSELS OR VEHICLES. Tesla's radio patents included an advancement in the radio art that has been missed by radio historians - multiple frequency transmission and reception. The purpose of developing a multiple frequency system was to prevent interference from other sources of electromagnetic waves (manmade or otherwise). No other transmitting station could interfere with Tesla's signals unless, of course, it was transmitting on exactly the same frequencies. Tesla's method of individualization (tuning) ensured complete privacy.

Tesla had been working on the principle of remote controlled devices as early as 1893. Unfortunately, the inventor suffered a tragic loss in 1895 when his laboratory burned to the ground.

“The destruction of Nikola Tesla's workshop, with its wonderful contents, is something more than a private calamity. It is a misfortune to the whole world...The men living at this time who are more important to the human race than this young gentleman can be counted on the fingers of one hand; perhaps on the thumb of one hand.” (Charles Dana)

Tesla applied for his remote control patent on July 1, 1898. In September of that year, the inventor demonstrated his radio controlled torpedo boat in Madison Square Garden in New York City. The Chief U.S. Examiner of Patents visited Tesla's laboratory to verify the inventor's claims. Once verification was made, the patent was issued just two months later. Keep in mind that the Wright Brothers historic flight was still six years in the future.

By coincidence, Tesla's radio controlled boat demo occurred just prior to the Spanish American War. The inventor suggested that his invention would be of extreme importance as a weapon of war. Tesla extended his prophecies to describe a self-thinking weapon that when left to itself would “be able to distinguish between what it ought to do and what it ought not to do.”

Furthermore, the brilliant scientist described how an armed device based upon his radio control principle could accurately find the target by zeroing in on the enemy ship by bouncing wireless signals off its hull.

Unfortunately, the world was not ready for Tesla's invention. The Navy, it seems, preferred to stick to outmoded methods of military preparedness. The science community responded with a harsh criticism of Tesla's work. “When we are expected to accept in silence such an utterance as that quoted above... we refuse point blank, and are willing to face the consequences” wrote the Electrical Engineer. And in another article of the same magazine, “Do you suppose that in the din of battle it would be possible to put into execution those minute and carefully adjusted mechanical experiments all of which are presupposed by this theory, which require the uninterrupted quiet of a laboratory to work successfully?” Too bad those writers are not around today to witness smart bombs and cruise missles.

During World War II, Edwin Armstrong, the inventor of FM and advanced radio circuits, was working on radio guided weaponry for the military. “In my 'Appreciation' of the work of Tesla which came during wartime, there was much research under way toward reducing the Tesla concept of the guided weapon in various laboratories - I considered it inadvisable to draw any attention to the subject by reference to Tesla's early concept of the matter. So far as I know, the credit for the concept rests entirely with him.”

While developing his multiple frequency concept, Tesla ran into an unexpected obstacle. The U.S. Patent Office notified Tesla of a patent application by Reginald Fessenden based upon a similar concept. An Interference investigation followed and depositions by Tesla were given in 1902. George Scherff, Tesla's secretary, and Fritz Lowenstein, Tesla's employee at Colorado Springs, both gave testimony on Tesla's behalf. The Tesla patents were upheld by the courts.

All of this is reported and analyzed in a remarkable book - NIKOLA TESLA: GUIDED WEAPONS & COMPUTER TECHNOLOGY edited by Leland Anderson. The book also covers the early history of radio control pertaining to the work of B.F. Miessner and J.H. Hammond, Jr.

Six full pages are focused upon Tesla's connection to the AND logic gate principle that is so important to computer technology. Seven appendices of patents and correspondence complete the book. With all due respect to the several excellent biographies written on Tesla's behalf, it is a publication like this that cuts the fat and gets to the meat of Tesla's true scientific work. The book and other papers by Anderson, notably BALL LIGHTNING AND TESLA'S ELECTRIC FIREBALLS are available from 21st Century Books, P.O. Box 2001, Breckenridge, CO 80424-2001. 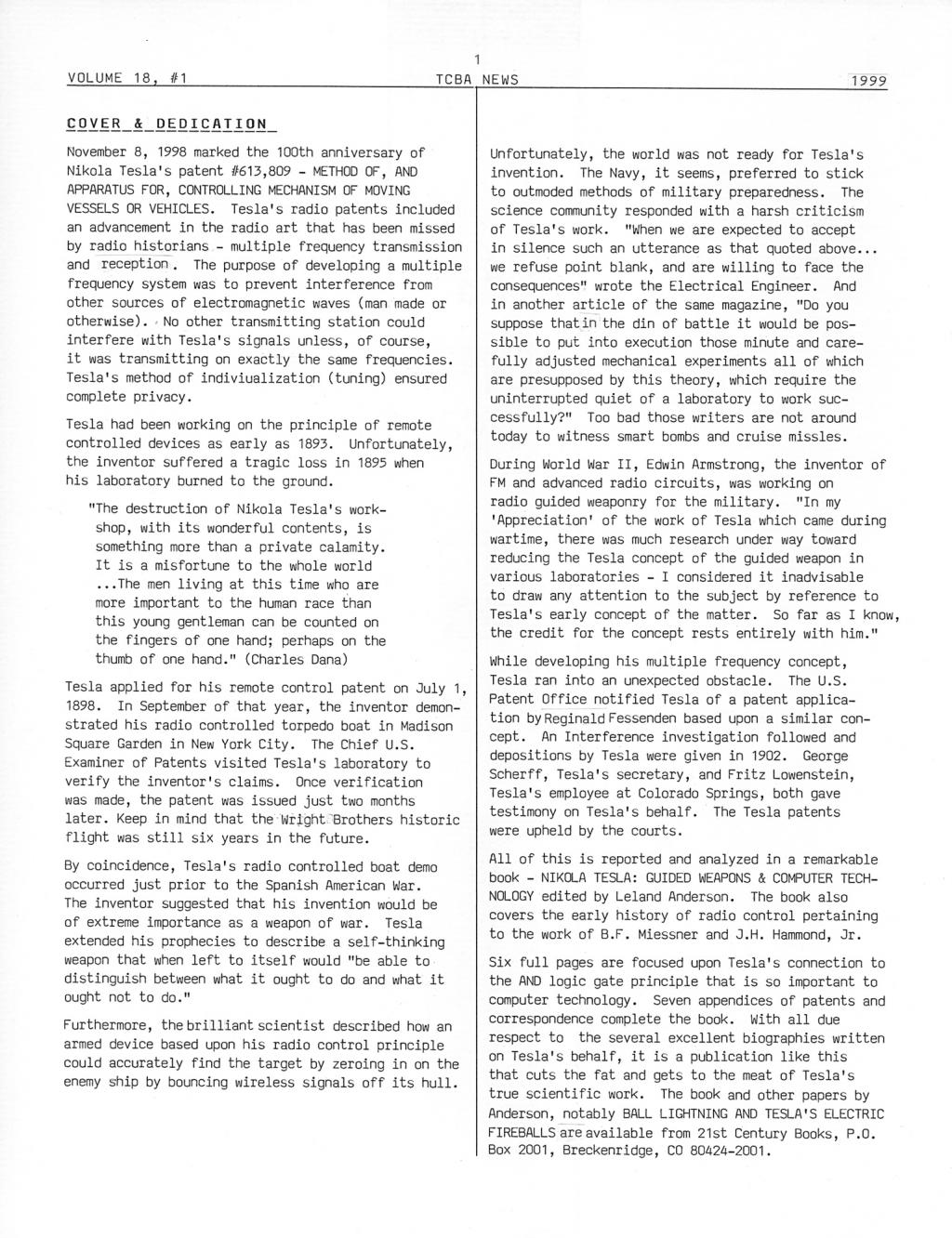