Your 1987 subscription includes a bonus in the form of an historical souvenir. It is a program announcement of an electrical show given just before the turn of the century. There is no indication of the region in which it was held but my guess is San Franciso. If anyone has any additional information on this event, please let me know. Anyway, enjoy this little addition to your collection. TCBA wishes to thank radio historian Alan Douglas for bringing it to my attention.

With each passing year, I am the recipient of reports regarding the making of a movie on the life of Nikola Tesla. If all of them had materialized, there would probably be a dozen or more Tesla films. Now, I am the receiver of another “hot tip.” If, like me, you have pictured Gregory Peck, George C. Scott, or, maybe, Paul Newman as the perfect casting for the character Tesla, think again. The latest rumor has it that the leading role will be played by Clint Eastwood. I can see it now - “Go ahead, make my day - zzZZAP!”

In May of 1911, Nikola Tesla spoke before the New York section of the National Electric Light Association. The ELECTRICAL REVIEW AND WESTERN ELECTRICIAN (Vol. 58, #20) stated, “He next showed another effect of such a magnifying transmitter with a large ball, thirty-nine inches in diameter, which was placed just a little above the building, the roof of which was removable. Several streamers could be followed a hundred feet into the air; from a distance it looked as if the building was on fire and the roar could be heard for ten miles.” No photo of this description appears in COLORADO SPRINGS NOTES. Does anyone know if this photo has ever appeared in print?

“According to the Encyclopedia,” 'Experiments suggest that, in the early days of the earth, lightning may have been responsible for the synthesis of the organic chemicals that eventually led to the development of life.' “This is why Dr. Frankenstein put his monster on an elevator bed and cranked him up through the ceiling. It also explains why the castle had to be on a high crag and why there always has to be a thunderstorm in a Frankenstein movie.” (Buffalo News, August 27, 1986)

When you were growing up, did you have an older brother who played tricks on you? Or, maybe it was you who zapped a younger member of the family. In either case, it was the junior member who got the worst of it. Our current cover brings to mind my own experiences when growing up during the 1930's. The artwork from the July, 1917 Electrical Experimenter seems to describe them nicely.

This issue is dedicated to the memory of George Westinghouse. Rather than write a biographical account of his accomplishments, I have used Nikola Tesla's tribute which he wrote upon learning of Mr. Westinghouse's passing. Tesla provides an insight into the man not regularly revealed in the usual biographical essays. See “Dedication - George Westinghouse” elsewhere in this issue.

Heroes of the Past

Every once in a while, TCBA receives letters requesting information regarding the personalities to whom the NEWS is dedicated. Some writers are interested in writing a letter to them. You should realize that the majority of our subjects were active in the late 1890's to the early 1930's. I doubt that any of our subjects are still living. Any decent library will have biographical encyclopedias giving both the birth and death dates of famous personalities.

A package recently received at TCBA headquarters contained a video tape of the first chapter of an early sound movie serial called “The Clutching Hand.” It is typical of the old mad-scientist type movies including such cliches as (1) a masked villain, (2) the trap door activated by a large handle, (3) a secret microphone, (4) television phone communications, and (5) ...hey, are those what I think they are? Yes, there is a blinking light, Jacob's Ladder, a multi-distributor rotating spark gap, and the “Meg Senior” Tesla coil, all of which belonged to the late Ken Strickfaden. The story is about a scientist who has discovered the secret of turning lead into gold (connect the positron to the negatron, the neutron to the trinitron, etc.). The high voltage scenes are fun to watch as there is much sptizen und sparken. For more information, write Rex Miller Supermantiques, Star route Box 331-J, East Prarie, MO 63845. Phone (314) 649-5048. A large catalog is available for $5.

More Tesla Coils in the Movies

While switching TV channels, I caught a glimpse of a neat Tesla coil in the old black and white movie, “The Corpse Vanishes” (Bela Lugosi). Then, on another channel, I saw what looked like the identical coil in “Bulldog Drummond Strikes Back” (Ronald Colman). I am not able to say if they were activated or just served as studio props.

A special thank you to members who remembered to include their membership number when renewing subscriptions. It really helps, guys. 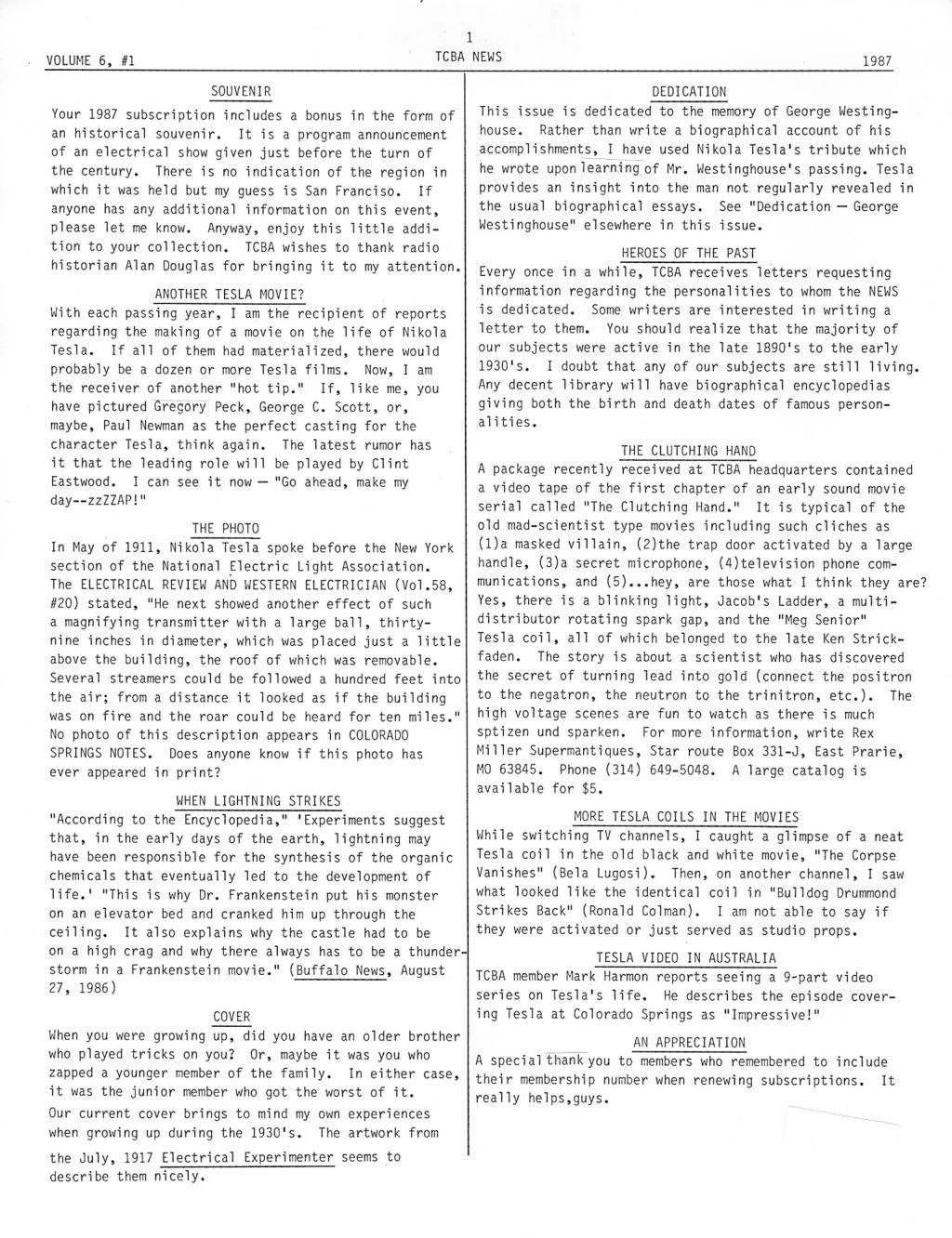