With Control in Hand

One can do some very interesting things with radio frequency equipment. This is especially true when one is writing science fiction. Take for instance the art of Frank R. Paul that appeared on the cover of Amazing Stories for July, 1927. The painting describes a scene from the article “Radio Mates” by Benjamin Witner. The story is about a scientist who had been the victim of a vicious plot. He is shown on the cover about to convert his sweetheart (inside the mammoth transmitting tube) into a radio wave to be transmitted into space where at some distant point she will be reproduced as herself. He expects to follow her in a like manner. You don't believe it, you say? The poor gent clamped to the wall does. Look at the expression on his face. He certainly is in a dither.

Never mind the story. By just looking at our cover, you could have come up with an interpretation not too unlike Witner's version. My only complaint is that there doesn't seem to be an oscillation (Tesla) transformer. He would need one to get the proper wavelength. Perhaps it is hidden off to the left of the photo where other parts of the transmitter are shown.

It's no secret that I hold an amorous affection for the cover artwork that appeared on Gernsback's publications. This is especially true where there is the inclusion of high voltage apparatus such as Tesla, Oudin, or induction coils, control boards with big switches, large meters, blinking lights and all that kind of stuff. One of my favorites appeared on the cover of the Experimenter for March, 1925. I used that one for our very first cover (Volume 1, #1). Remember the fellow sitting in a tub of water that was connected to the secondary of a monstrous Tesla coil? Long discharges were seen coming from all parts of his body. How could you forget?

Daniel Stashower's article (Smithsonian for September) “A Dreamer Who Made Us Fall In Love With The Future” is a stirring tribute to Hugo Gernsback. He was not only the father of “scientifiction” but an inventor-innovator in radio communications. Gernsback was a strong force behind the development of amateur (ham) radio. The article is not only well written but is profusely illustrated with many of the science fiction covers produced by Frank R. Paul (see Dedication). The artwork chosen for the cover of this issue is included in the Smithsonian article.

One of the references listed in the article is Profiles of the Future by Arthur C. Clarke. I took it out on loan from the local library and found it to be very interesting. The book is dedicated to the memory of Hugo Gernsback.

Much of the artwork that appeared on Hugo Gernsback's covers was done by Austrian-born Frank R. Paul. He was a Gernsback discovery. Paul studied to be an architect and his training is reflected in the formal geometry which graces his finest designs.

Paul had little or no precedent from which to gain any inspiration for his sketches. It is a fitting tribute to his incredible imagination that his vision and stylization of science fiction would characterize all similar work for nearly 40 years. When illustrating a story, Paul would often use vast vistas with a vanishing point perspective. He had a bias for epic conceptions such as shimmering towers rising from a crystal-like terrain and extending into the clouds. He would create monstrous galactic cities, alien landscapes, and mechanical behemoths that frequently took on comedic characteristics. All of his work, however, was done with elaborate attention to the smallest detail.

Hugo Gernsback wanted no subtle renderings or pastel shades. He insisted on eye-catching covers, something that would leap out from everything else on the newsstands. Frank R. Paul did not disappoint him.

You may recall that Volume 8, #4 carried a story about the art treasures of Batiste Madalena. Madalena's movie posters were nearly destroyed by an ignorant movie-house manager. Fortunately, they are now saved for future generations to enjoy. I then pondered as to the fate of the original artowrk that appeared on Hugo Gernsback's publications. The answer came to me just recently.

Gernsback had instructed his janitor to clean out the basement. The janitor filled several barrels and placed them in a nearby alley. The barrels contained many of Frank R. Paul's original paintings.

It is fortunate that Sam Moskowitz, a Gernsback friend and co-worker, decided to step out in the alley for a breath of fresh air. Moskowitz saw the barrels of paintings and took them home.

That's the good news. The bad news is that if you want to purchase a Frank R. Paul original, be prepared to spend up to $15,000 each! 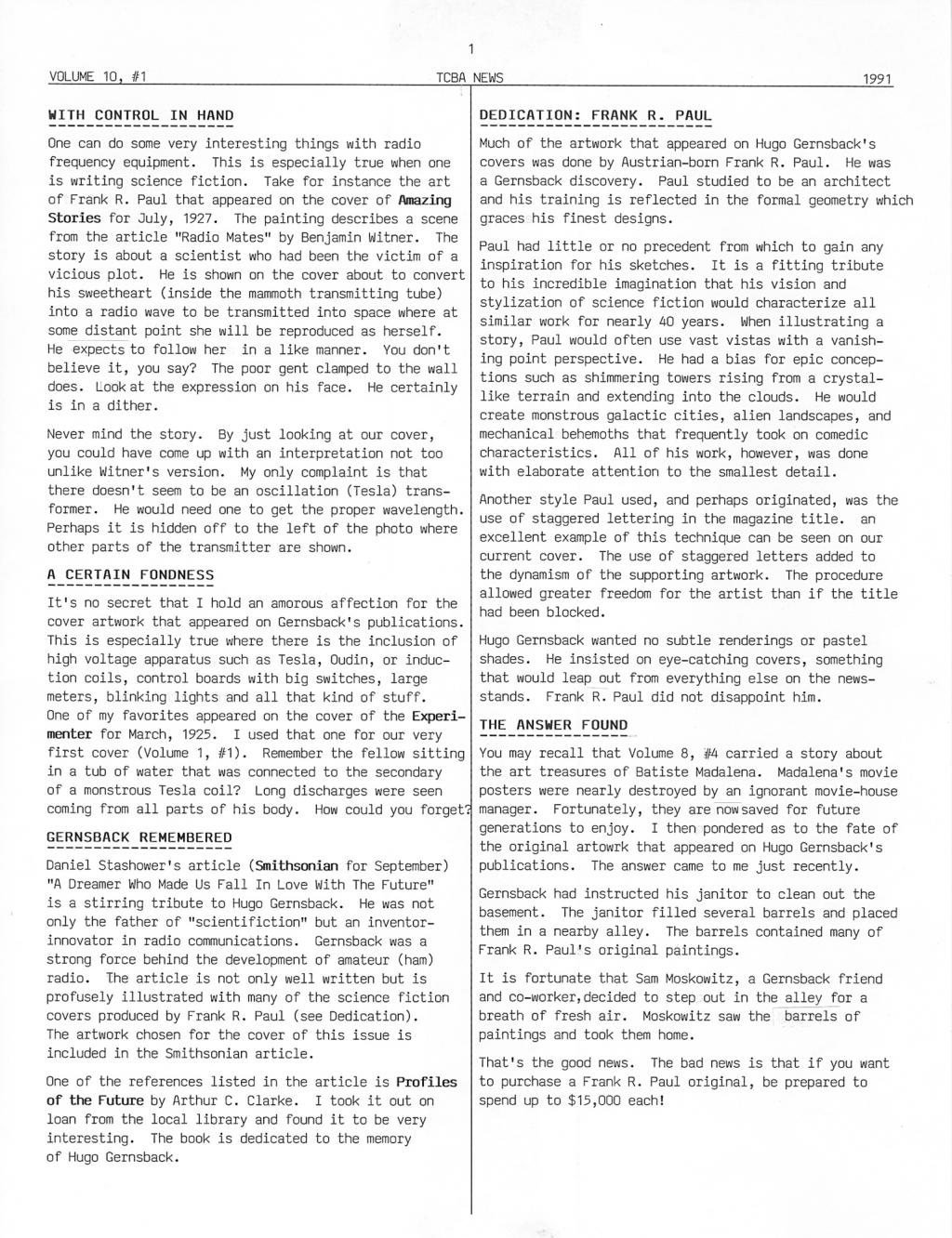