Our cover for this issue features a 1956 photo of the late Samuel G. Hibben, then director of applied lighting for the Westinghouse Lamp Division. The photo was taken in Chicago during a program celebrating Nikola Tesla's 100th birthday anniversary. The affair consisted of a joint effort by the (then) American Institute of Electrical Engineers and the old Tesla Society.

I had the pleasure of attending the October meeting and can vividly recall the privilege and honor of meeting with Dr. Hibben.

Samuel G. Hibben was born shortly after Nikola Tesla had presented his monumental paper before the American Institute of Electrical Engineers in 1888. Whether or not this had anything to do with Hibben becoming an electrical engineer might better be explained by astrology rather than by science. Nevertheless, he became an electrical engineer and spent over 60 years pursuing new lighting techniques.

In 1906, Hibben served as an illuminating engineer with the Macbeth Evans Glass Company in Pittsburgh. He later became a consulting engineer with Westinghouse. By 1933, Mr. Hibben held the position of director of lighting with that firm.

Samuel Hibben served his country in both World Wars and is credited with designing the first mobile anti-aircraft searchlight. He also pioneered marine illumination and designed floodlight displays that were used to illuminate the Washington Monument, the Holland Tunnel, as well as Natural Bridge and Endless Caverns in Virginia and the Carlsbad Caverns Crystal Cave in New Mexico.

Dr. Hibben died on June 9, 1972 just 3 days after his 84th birthday. In a tribute to Nikola Tesla, Hibben stated that “Tesla deserves great honor for his work.” (See “Tesla - Prophet of Modern Lighting” elsewhere in this issue.)

I've made use of editor's license and included a photo of myself. It is shown here not for the purpose of self glorification but because it happens to be one of my most prized souvenirs of that 1956 event. (See “The Photo of Which I Am Most Proud” on page 18.) With that said, I promise to keep my mug out of the newsletter forever and ever. Well, at least for one year

In the Morning Mail

“I saw Tesla Coil Builders on a bumper sticker on my way to work. I went to the public library and got the address. Here I am.” (Eric Aker)

“Regarding the G.E. Tesla coil on the cover of Volume 12, #4. If this appeared in a British book, it might have been built by the British G.E.C. That firm was easily large enough to have built such equipment. It was no relation to the U.S. G.E.” (Alan Douglas)

“Thanks for just bein' you and keepin' the Tesla crowd informed and honest.” (Richard Hull)

“Thank you for your effort, dedication, and experience in publishing TCBA.” (Leo Dringoli)

“Your publication brings encouragement and delight to so many of us.” (Jim Corum)

“I am indeed impressed at how you continue to persevere in spite of your adversities.” (C.A. Bonar)

“It is very good of you to offer special rates for people who are out of work and cannot renew. I know what it's like...I had to use one of your special rates a few years ago...I would rather starve than miss a single issue of the newsletter.” (Robert Panichi)

“I am very happy to have discovered your association, and only wish I had done so long ago.” (Herman Flynn) 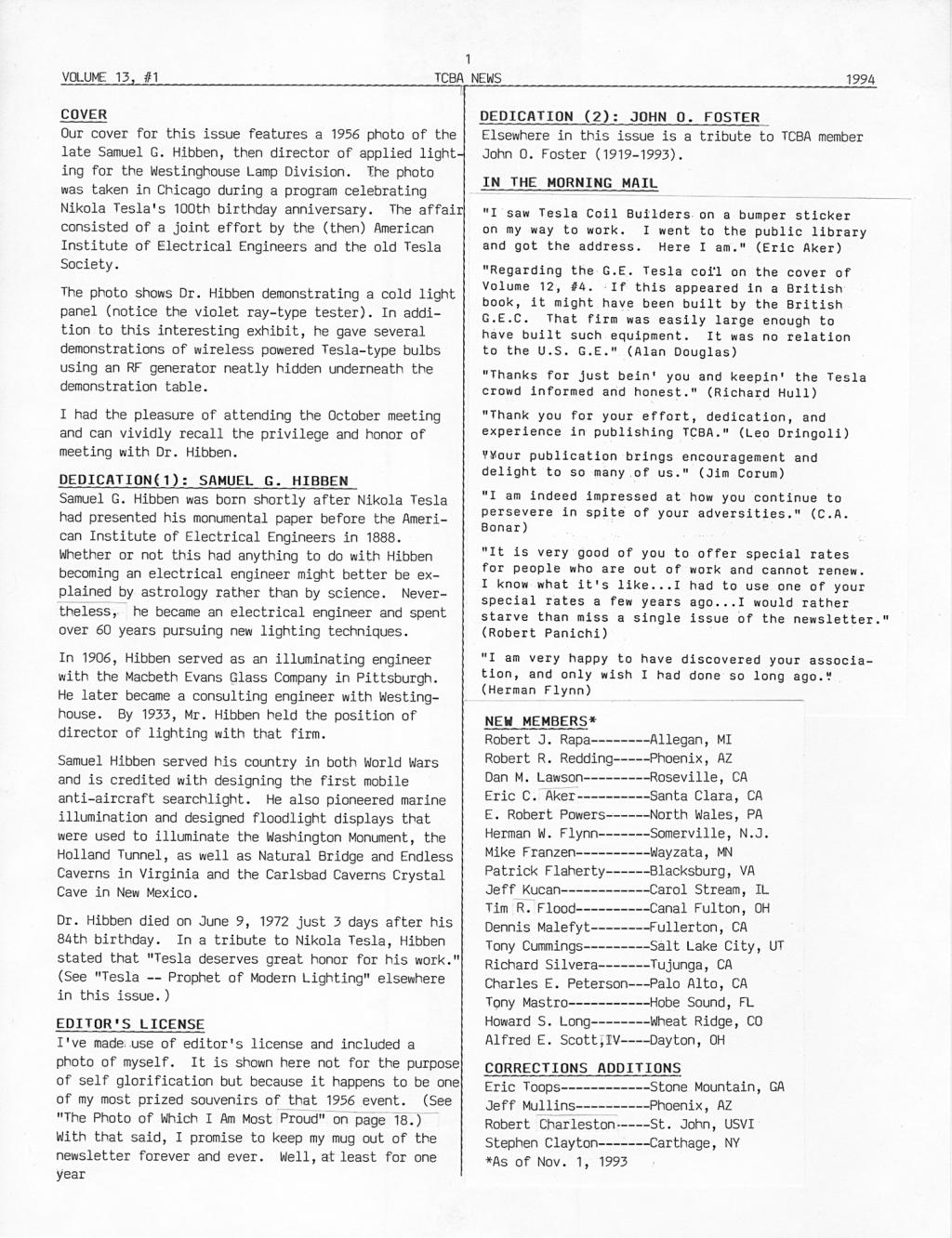