The cover photo for this issue is of the five million-volt Tesla coil described in the Physical Review for January 1, 1930 (“A Laboratory Method of Producing High Potentials”). Anyone interested in Tesla coils will surely find great interest in the PR article. A photocopy can be obtained through your library services.

During the late 1920s, scientists G. Breit, M.A. Tuve, and O. Dahl were employed by the Department of Terrestrial Magnetism, Carnegie Institution of Washington. The three undertook an experimental project for accelerating helium nuclei. The source they chose to supply the necessary potentials for accelerating the nuclear particles was a Tesla coil.

Several designs were tested, one of which was a single ended unit with a flat spiral inductor at one end. The dipole configuration shown on our cover was the final design chosen for the project. Potentials of 3,000,000 and 5,200,000 were achieved. It was concluded that the higher voltage would yield equivalents of about 2,600 grams of radium. 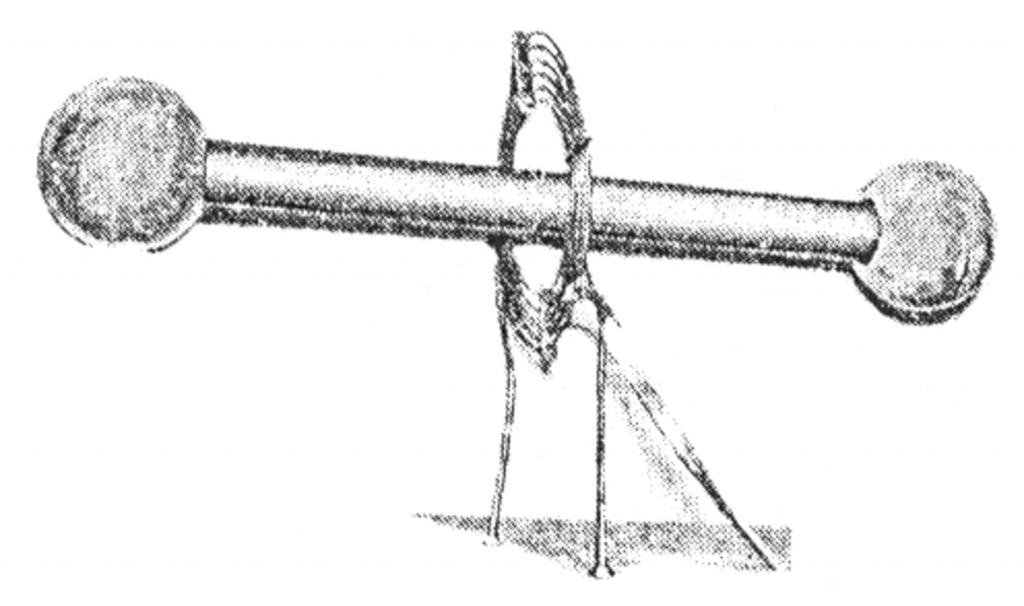 As seen in the cover photo, as well as the above diagram, the primary inductor consisted of several turns of spirally wound copper tubing. The secondary held several thousand turns of #38 to #40 of either double silk, silk enamel, or heavily enameled wire. The authors stated that the best coil contained from 5,000 to 7,000 close wound turns.

The secondary form consisted of Pyrex glass tubing with a diameter of 8 cm (3.15") at a length of from 90 cm (35") to one meter (39.37"). Corona shields (spheres) of from 5 to 10" in diameter were placed at each end of the secondary in order to provide for a more linear build-up of potentials.

A synchronous gap served as the interrupter for the three million volt experiment. A fixed gap was applied when the rectified X-ray power supply was on circuit.

Although the Tesla coil was physically small, this was no simple project. The entire unit was housed in a tank of oil. At about this time, Robert Van de Graaff had made headlines with his electrostatic generator. Breit, Tuve, and Dahl continued their experiments using a Van de Graaff generator. However, they concluded that “the amount of energy which may be drawn from Tesla coils is sufficient to obtain sufficient numbers of high-velocity particles for disintegration-experiments.” 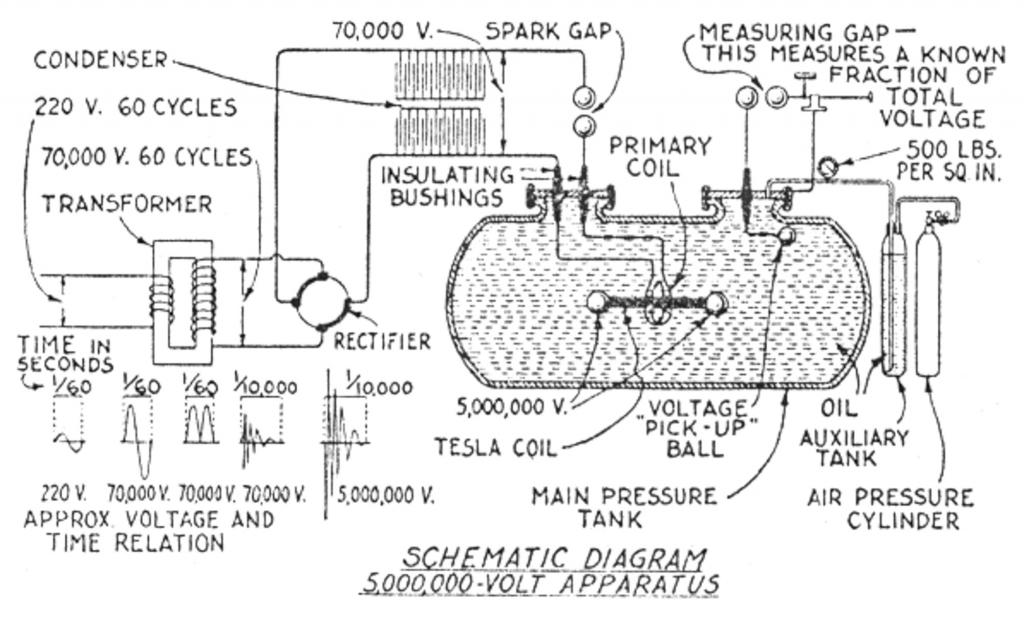 The unit constructed by Breit, Tuve, and Dahl contradicts all that we have come to expect of an efficient design. However, what they were able to accomplish is a tribute not only to their experimental abilities but also to the amazing properties of Tesla's creation.

Unfortunately, the Physical Review article is much too long to carry in this newsletter. However, the experiment was also written up in several technical magazines including Popular Science for January, 1929. The following is an excerpt from that issue.

Dr. Breit and Dr. Tuve, the Carnegie experts, decided to build a transformer that would step up ordinary electric current to hitherto unconceived voltages. For design they chose a type of high-frequency transformer widely known as the Tesla coil - a device demonstrated almost forty years ago by Nikola Tesla, whose remarkable electrical inventions were recently described in this magazine. 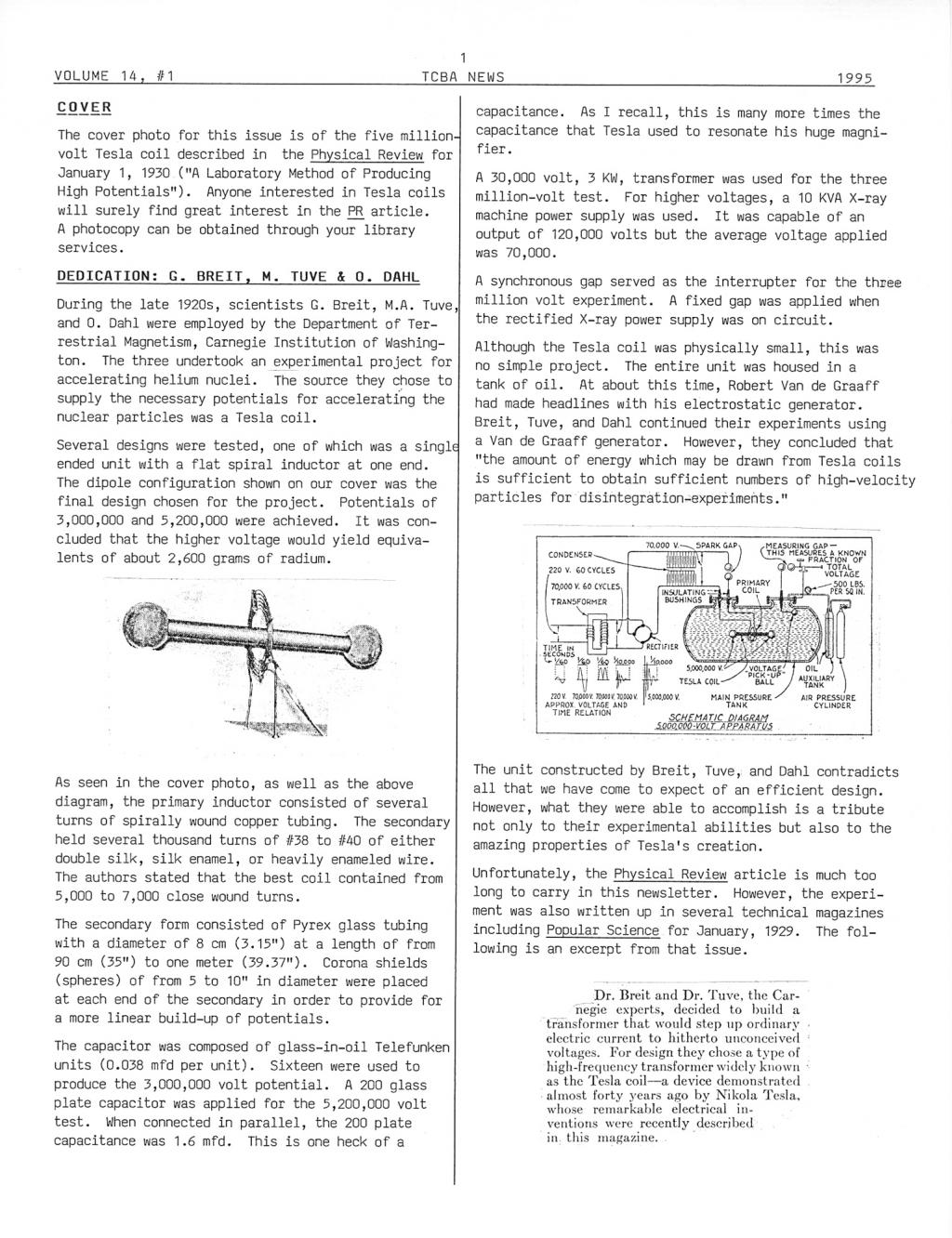