The September issue of Popular Electronics carried an article on the great debate over which electrical system would better serve society. The two major opponents in the War of the Currents were George Westinghouse and Thomas A. Edison. Westinghouse favored alternating current while Edison defended his direct current inventions. The Westinghouse camp held the right cards - Nikola Tesla's polyphase patents. Neither Tesla nor Tesla's polyphase alternating current system were mentioned - unbelievable! Also missing from the discussion was the name of William Stanley, the electrical engineer who pioneered the single phase AC system at Great Barrington, MA. Author Rybak praised the General Electric Company for its leadership in alternating current development. Not recorded, however, was GE's attempt to infringe upon the Westinghouse-Tesla patents. The courts ruled in favor of Westinghouse. The GE was only able to get in on the new AC frontier through cross-patent agreements.

Kudos to those who included their membership number when renewing subscriptions. Some include it on their renewal check while others return the mailing label from their TCBA envelope. Either method is equally helpful. I intend to record your number on those friendly yellow “Time To Renew” stickers. Just stick them to your check and the problem is resolved.

The November issue of Electronics Now carried a project article on how to build a small solid state Tesla coil. The circuit uses a flyback transformer to provide the high voltage output.

Isn't there a biblical phrase which states “Thou shalt not irritate thy neighbor?” It must be true because one of our members has been the target of a shotgun-carrying neighbor. It seems that the trouble started when a magnifier was energized outdoors. The neighbor, who is deathly afraid of lightning, saw the noisy 8' discharges streaming forth from the terminal capacitance. Suddenly, shotgun pellets began falling from the sky. That put an end to our member's outdoor electrical experiments. OK, so I made up the biblical phrase. But here's a bit of advice. If you live close to your neighbor, keep your Tesla coil experiments a secret. I don't want to read a newspaper account describing the murder of a TCBA member in good standing. Of course, it's another matter if his account shows a debit (that's a joke, son).

A letter recently received states “I have been having financial problems which is why I have not renewed. I do not wish charity.” The writer is well aware of the fact that TCBA assists those who wish to continue their subscription but who cannot come up with the necessary funds. The TCBA policy is as follows: (1) Pay $6 in quarterly installments. (2) Pay $12 up front and get a 4 issue subscription with no further payments required. (3) Receive a subscription with no money up front but pay $24 when you are able. (4) Receive a one year subscription at no cost with no payback involved. Take your pick. Items 2 and 4 are a one-time offer. A member can take advantage of items 1 & 3 as often as is needed.

I don't like to see members dropping out just because they are lacking a few bucks. This isn't a business and I don't have the problem of writing up a debit sheet. If someone needs assistance, I'm here to help. Besides, we have members who have donated extra funds for just this purpose. It's the kind of assistance that I would want for myself if I had a financial problem. But - is it charity?

“By using litz cables, we get better coupling efficiency” states an article in Design News (9/26/94). Two scientists at MIT have discovered that litz wire increases efficiency in RF induction heaters. “In one experiment, a conventional RF heater required 4,400W output at 64 kHz from an RF generator...The litz cable design required only 1,800W.” (tip from Brian Melody)

Zenneck (Wireless Telegraphy, McGraw Hill, 1915, p. 49) credits Tesla with the suggestion for using braided cables made up of individually insulated conductors. There is a similar reference in COLORADO NOTES (page 400). 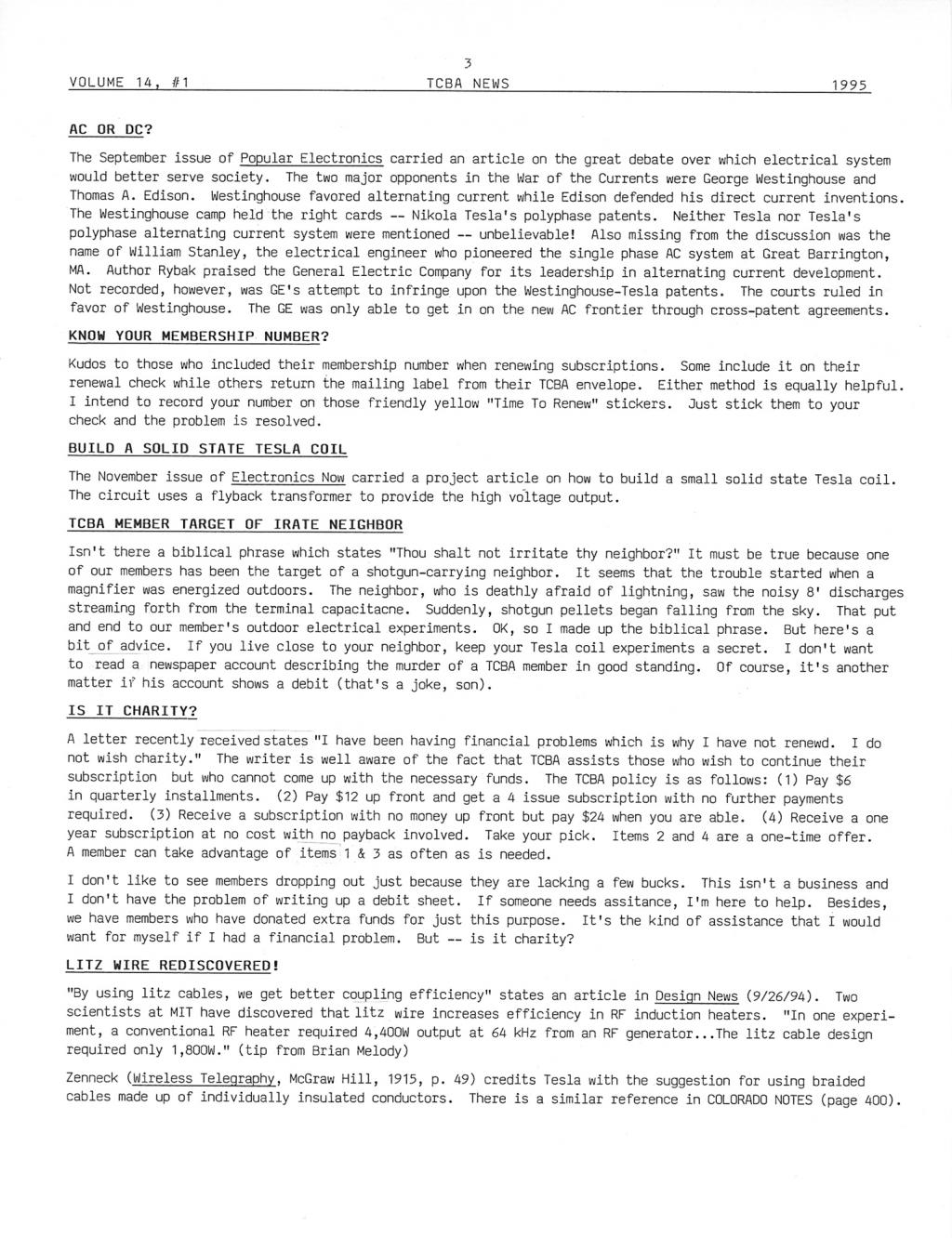