The third annual Rochester Area Tesla Coil Builders Teslathon was a two-day affair held at Ed Wingate's home and lab in Brockport, N.Y. on August 27 & 28. TCBA member Steve Cole and wife Fay traveled from Crestline, California for a 5-day visit which included side trips to Niagara Falls Power Project and the Boston Museum of Science (to see the Van de Graff generator, of course!) with Ed and Wife Cheryl. There was much arcin' and sparkin' over the two days and many kilowatts were consumed as many different size coils both vacuum tube and classic spark-excited were fired. The weekend festivities were also punctuated by frequent firings of Ed's twin coil system with point-to-point discharges of 15' (spark path approx. 20'). Many of the guests also had the hair raising experience of being “charged-up” on the 24" Wimshurst sectorless static machine that worked quite well despite the 90% humidity. Hot dogs, hamburgers, corn on the cob, salads, and homemade pizza were served as appetite quenchers both days.

Steve Clayton, a TCBA member who is stationed at Fort Drum, N.Y. and his wife Johnnie stopped by on Saturday. It seems that Steve has been all over the country during his military career and has a photo album that includes snapshots of a great many TCBA members and their coils, a very interesting collection indeed!

The whole gang enjoyed all the demonstrations and Tesla talk and everyone agreed that it's great to know that the Tesla spirit is thriving thanks to the TCBA and the extensive exchange of information and videotapes that has taken place in the last few years.

Ed had such a good time that he decided to visit the TCBOR Teslathon in October. (report from RATCB)

On Saturday, October 8th, 1994, the Tesla Coil Builders of Richmond, Virginia held their annual Teslathon at the home and lab of Richard Hull. The day turned out to be a beautiful and sunny fall day with 77 degree temperatures. About 35 people were in attendance and saw the group's Magnifier #9 throw hot arcs all over the lab at Hull's home. A cookout featured hot dogs, a deli plate, corn on the cob, cold sodas with pies and cakes brought in by the attendees.

Lots of discussions and small groups gathered to chat about coils, their construction and operation. A mini flea market was also held and Tesla coil materials were offered ranging from 34,000 volt, 3 KVA potential transformers weighing 250 lbs. to gas discharge tubes filled with rare gases and finished Tesla coils. Many coilers went home with materials which would allow them to complete or upgrade their systems.

In the evening, between large coil displays of sparks and arcs, formal talk sessions were held ranging from demonstrations of modern high energy permanent magnets to vacuum technology with Crookes tubes, etc. Ed Wingate of New York brought his variable phase, synchronous, rotary gap and explained its operation and theory to the assembled crowd. Videos were shown of some of the best coils from around the country. Richard Hull and Lou Balint presented a short talk on the 1994 Tesla Symposium with a video slide show of the large 13M Wysock Magnifier. The totally silent “Bylund” solid state Tesla coil was used to generate intense RF fields and show off some of Bill Connery's excellent rare gas discharge tubes during a light show which brought oohs and aahs with each display.

The event lasted from 10 am Saturday morning until 2 am Sunday morning when the last group of bleary eyed, ozonated attendees pulled away from Hull's home. The farthest attendee award went to John Washuk of California. Next, came John Plyler from Denver, Colorado along with Scott Fusare of Vermont and Ed Wingate of upstate New York. 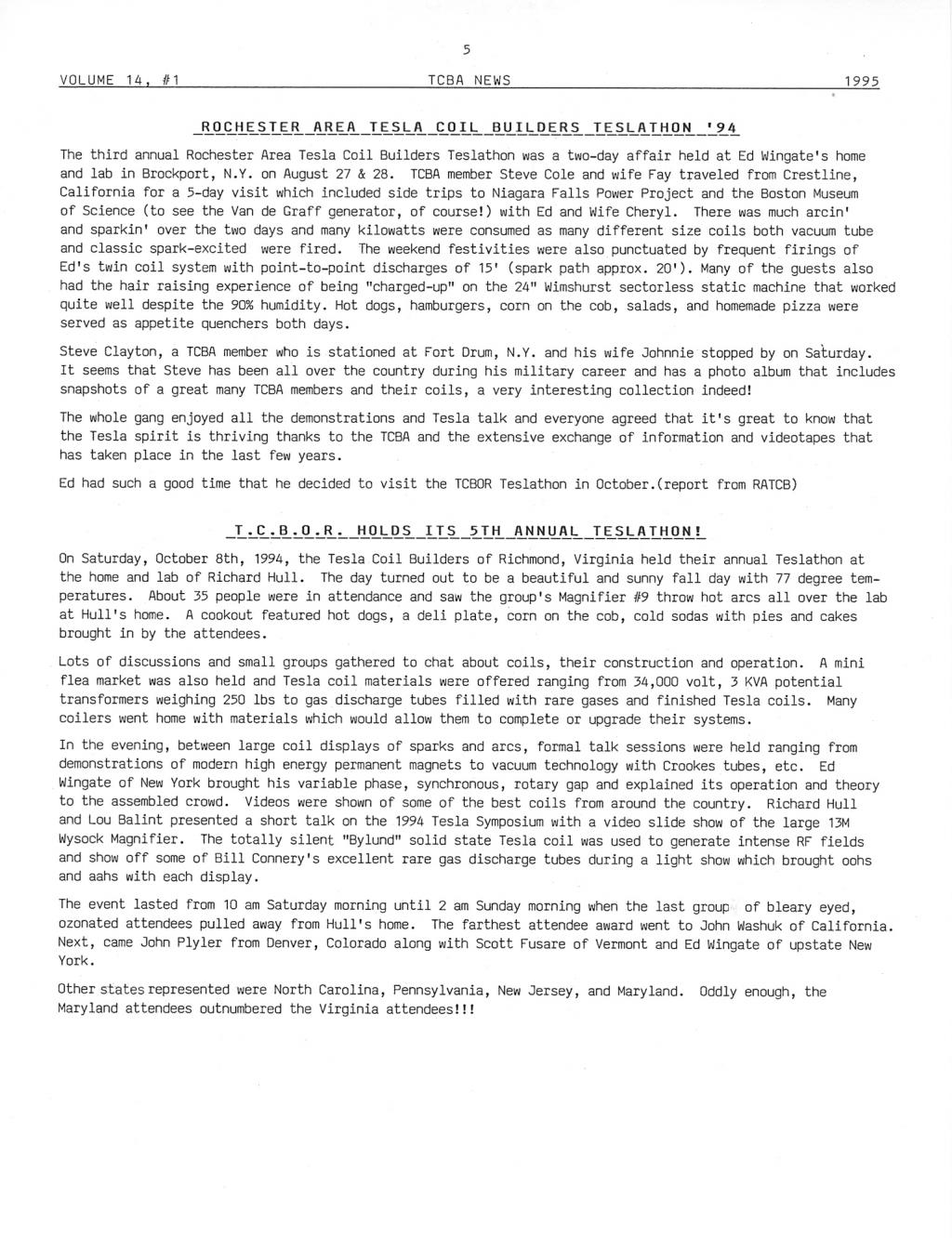