Passing the Torch and Other Fond Memories

While Ed Wingate and I, and our wives, were at the Boston Museum of Science enjoying the giant Van de Graaff, we decided to speak with the technician who had just finished running the show and was fielding some questions from the audience. After most of the questions had been handled, Ed and I overheard a woman and her son asking the technician questions - not about the wonderful Van de Graaff machine - but, yes, about the small tube type Tesla coil that was demonstrated during the show. The woman said that her boy was very interested in building his own coil and that she wondered if there were any clubs and organizations out there that focused on just this type of interest. The technician told them that there was indeed an entire organization devoted entirely and exclusively to the enjoyment of building these great devices. The woman was stunned to learn that there would have been such a group, especially in this day and age with all of its microchip innovations and solid state steak carving knives, etc.

Well, that's all it took! As you can well imagine, our ears were well-tuned to the conversation. Ed jumped right in and began to explain how there was INDEED a devoted throng of “sparkers” and “arcers” who gathered together and shared communication and information through the TCBA News publication. Naturally, your name, address, and other information were gratefully accepted. The thing that really made the day for us was the fact that this young 11-12 year old demonstrated a fascination for Tesla and the Tesla coil. He just couldn't wait to get home and start locating parts for his first coil!

There's something about the bright gleam in the eye of a young one that has just experienced the excitement of seeing his or her first Tesla coil in action. We all remember how it was. We just couldn't believe that such a thing could be built by the “common” man (or woman). What was once reserved for, and only seen by, the elite of scientific hierarchy was now revealed to us. And now, we could make one too!

When I began building my first coil, plastics like PVC and polyethylene weren't even invented. We had to use the standard cardboard tubes like the Quaker Oats box or other cylindrical paper products. There are now many new synthetics to work with as well as new types of wire coated with high voltage insulations that are far superior to the things that we had as youngsters.

When men like Harold P. Strand used to print the plans for their projects, there always seemed to be something in the parts list that was just out of reach of most of us who held a fervent desire to build one. So there were many times when we never completed the project. Quite often, our interest would wane because we couldn't afford that expensive cap or neon transformer (from the dealer who was concerned about selling a potentially lethal device to kids). Or, maybe the family hadn't finished emptying the box of oats. And then, it could be that mom caught you stealing two or more of her clothes hangers that you needed for the Jacob's Ladder project.

Did that stop us? NO! We eventually got the necessary components and achieved a successful end. It may not have been as nice as Mr. Strand's but at least it drew current. And above all, we made use of an otherwise empty cardboard tube (that was long before recycling caught on). Of course, we had to endure the inevitable scolding when circuit overloading interrupted mom's favorite radio program (heh).

Well, Harry, it is needless to tell you that the Boston Museum incident brought back the excitement of our early coilin' days. Seeing the youth's bright smile and expression of hope in meeting new friends with similar interests gave Ed and I the feeling that we had a fulfilling day. 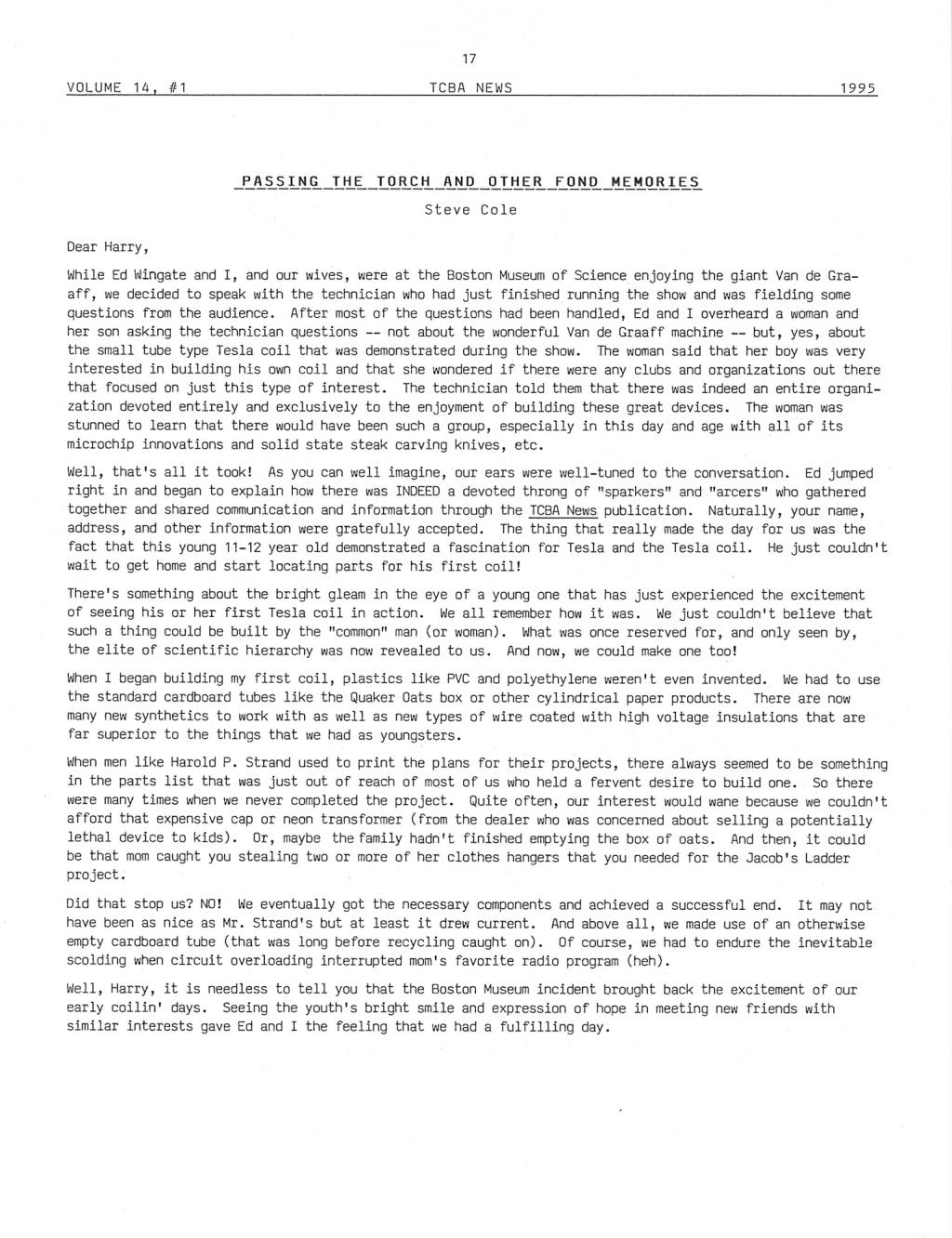