An Exchange of Views

(Editor's note: The following are taken from a letter sent in by one of our members. I've divided them up to fit our “Input - Output” format. “REM refers to the writer's remark and “REP” to my reply.

REM - The following paragraphs were written in response to “your condemnation” of those of us who do not write letters.

REP - It would have been preferable to have it worded as “your frustration” rather than “your condemnation.” I condemned no one.

REM - I know that I should write to these self-serving people who are in the news media and let them know of my displeasure with their comments. But in the letter you sent to D.K. Owens, it changes nothing.

REP - It is a mystery to me as to how you know that my rebuttal to the Owens article (Volume 13, #3) changed nothing. Perhaps you expected Mr. Owens to admit to his shallow research, apologize, and become a Tesla follower. If so, then dream on.

It may appear to you that he ignored the facts I presented but if he is a person of reasonable intelligence, then my comments surely gave him food for thought. Incidentally, my rebuttal was for the benefit of the readers more so than it was for Mr. Owens. They are not dumb and, as you and I, will see the weakness in Owens' reasons (excuses) for excluding Tesla.

REM - Take for example his comment about Loomis. He justifies Loomis' failure by stating “he failed for reasons beyond his control, but not from personal shortcomings.” And then in the same breath condemns Tesla because of his “grandiose impractical schemes.” He (Owens) either did not know or chose to forget that J.P. Morgan caused the little stock market crash of 1901 or 1902 which raised the prices so high that Tesla's finances were now only worth about 1/3rd of their original value.

REP - I am well aware of the history of Tesla's Wardenclyffe project so it was not necessary to inform me of the facts. Tesla's cause would have been better served if you had taken the time to inform Mr. Owens.

REM - I was talking to a friend last night and he mentioned things that people say like “Well, if Tesla had not discovered or invented it someone else would have.”

REP - I've heard that rationale many times over. My stock reply is to remind the doubter that billions of people have roamed the earth since Adam and Eve. Yet, it wasn't until Tesla that an AC polyphase system was invented. Shouldn't we give the guy a pat on the back rather than a kick in the rear?

Of course, there are many cases where more than one inventor has come up with similar ideas at the same time. So, if one didn't develop the idea the other would have. But that's no excuse for not recognizing achievement. There would be little inspiration for invention if we did not honor or reward those who contribute to the betterment of mankind.

And then there's the history of radio where one inventor had the idea and the other borrowed (?) it and got the credit for the invention. But that's another story.

REM - Anyway, his is not a true statement. No one has come up with a simpler, higher powered, inexpensive system than the one Tesla gave us back in the late 1890's with his three coil system.

REM - Now that I've spouted off, I'd like to tell you what I have done in place of letters. Everyone who should know about Tesla, I've told. I have purchased copies of Martin's book or MAN OUT OF TIME by Margaret Cheney and have given copies to people that I believe will tell others so they will know.

REP - I applaud your efforts but you've only touched a small number of candidates. On the other hand, when an editor writes an article for a magazine he can sway the minds of several hundred to several hundred thousand readers (depending, of course, upon which publication is involved). A letter or just a postcard can counter an editor's error or omission and, at the same time, enlighten thousands of possible Teslaphiles. 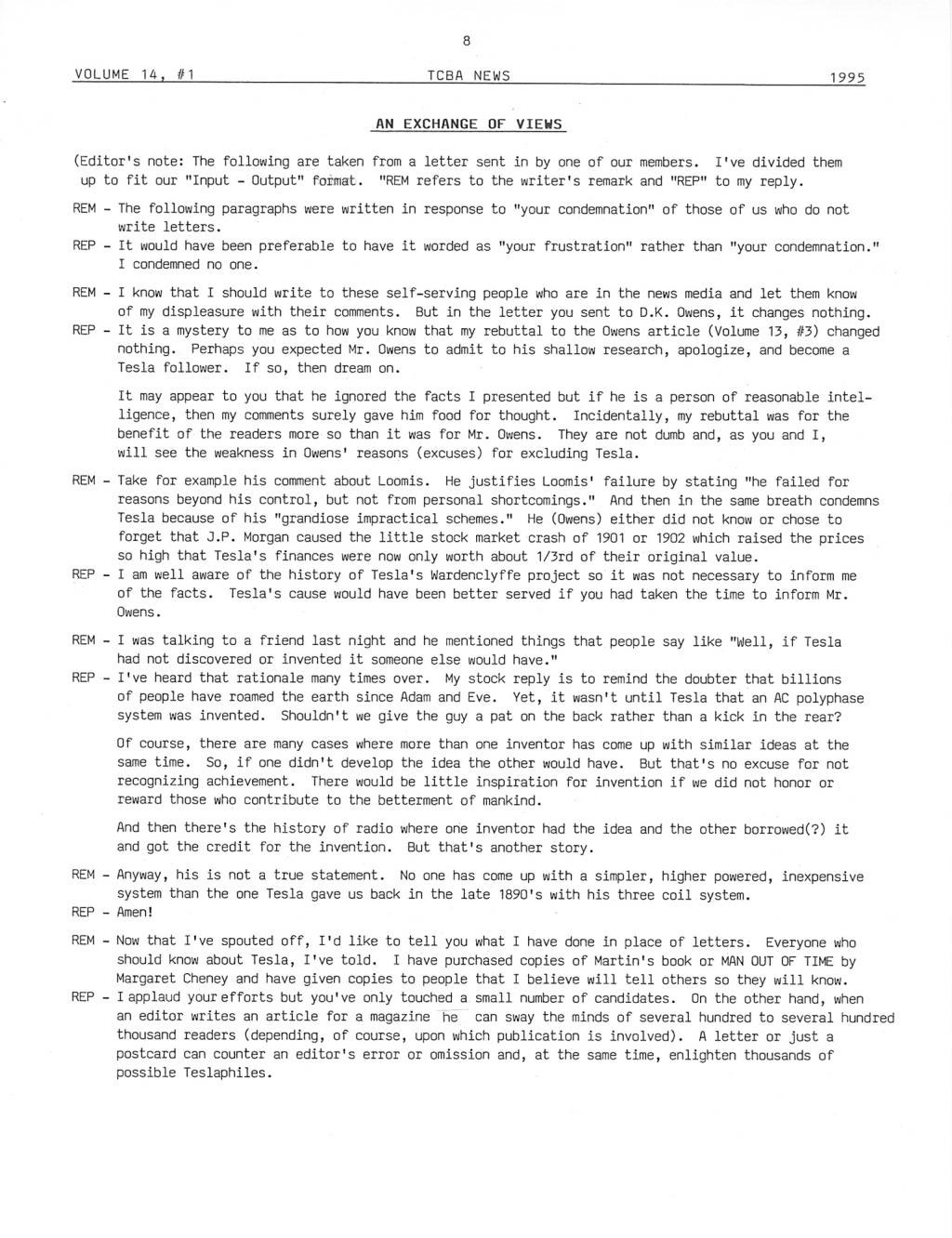