Observations by a Secretary

Because of his outstanding genius as an inventor and the success he had achieved, plus his personality and charm of manner, he was very much sought after by ladies of the then “Society of New York.” His invitations to attend functions of the various hosts and hostesses of society were many, but always he pleaded preoccupation with his work would not permit his accepting the invitations. Ostensibly, twenty-four hours out of twenty-four were feathers floating in the air on to which he attached being to sway and swing until his perspective was perfectly clear for carrying out his earthly assignments. His strange and isolated life in the meantime gave valuable contributions to society the world over, but his charming and captivating social manners were missed by those who invited his presence.

The Edison Medal is one of the very highest honors in the field of electrical art and science that can be bestowed on its recipient. For deeds honoring him, for glory and publicity he cared nothing as is attested to by the fact that when pressed financially and, in order to pay his running expenses, salaries, etc., he opened the safe and from it took the Edison Gold Medal. He looked at this beautiful medal in his hands and said: “Girls, this honorary medal has no value to me.” He was, at the same time, thinking of a way to pay our salaries. He then said: “Now I could sell this and it would bring enough money to pay you at least a part of your salaries.” When the sheriff finally came Tesla met him with a smile and a wistful expression in his eyes, saying “I assure you there would be no need for your coming here today if collectible debts owing me would be paid.” Tesla was not a business man. However, the Edison Gold Medal was never sold and is now a part of the Tesla Estate in Yugoslavia. Our salaries were fully paid by Tesla in due time. Tesla up to the time of his death was probably the only man who refused the Nobel Prize, regardless of the fact that it is the highest scientific honor on earth to bestow on an individual.

Tesla could often be seen in the early evening around the New York Public Library on Forty-Second Street feeding the pigeons. It is quite possible that he derived some special relaxation in doing this. Each week we ordered by telephone from a seed supply store in downtown New York ten pounds of seed for Tesla's stray pigeons. When ordering the canary bird seed with rape and other imported ingredients, we were instructed to leave orders to make sure that the seeds were clean and to blow them out for any dirt particles before delivery to his quarters in the St. Regis Hotel. The management of the hotel often asked him to desist from doing this as so many guests had complained of the nuisance and dirt they made. Nevertheless, he continued to feed the pigeons on schedule. He loved pigeons as we might love a cat or a dog, but for some reason pigeons were his special fancy. It has been stated that Tesla was “in love” with “a” pigeon. Such a very fantastic thing could not be as he loved all of them. There is nothing to be construed as “queer” when a man or woman loves dumb animals - even pigeons. Outside of this very illustrious and fascinating brain housing inventions by the hundreds, the pigeons seemed to occupy quite a niche in it, being his way of getting away from himself, no doubt. Then too, as a boy, he lived close to nature and always observed the flight of birds, their habits, and habitat which may be the reason for his attachment to pigeons. He also trained carrier pigeons.

As I write this in my home I am attracted to my window sill by piercing electric sparks. It flashed through my mind that possibly new electrical wiring of some sort had been placed outside my window from which sparks were eminating but, on closer view, I noticed a gray and white pigeon in one corner of the window sill whose eyes were blazing with electric sparks as it walked to the center of the sill. I arose from my chair to go to the closed window, keeping very quiet so as not to disturb my visitor's stay but, alas, he flew away all too soon. Do hope he will return one day so that the phenomena may again be observed. Am sure that Dr. Tesla would have had an explanation for this strange occurrence. 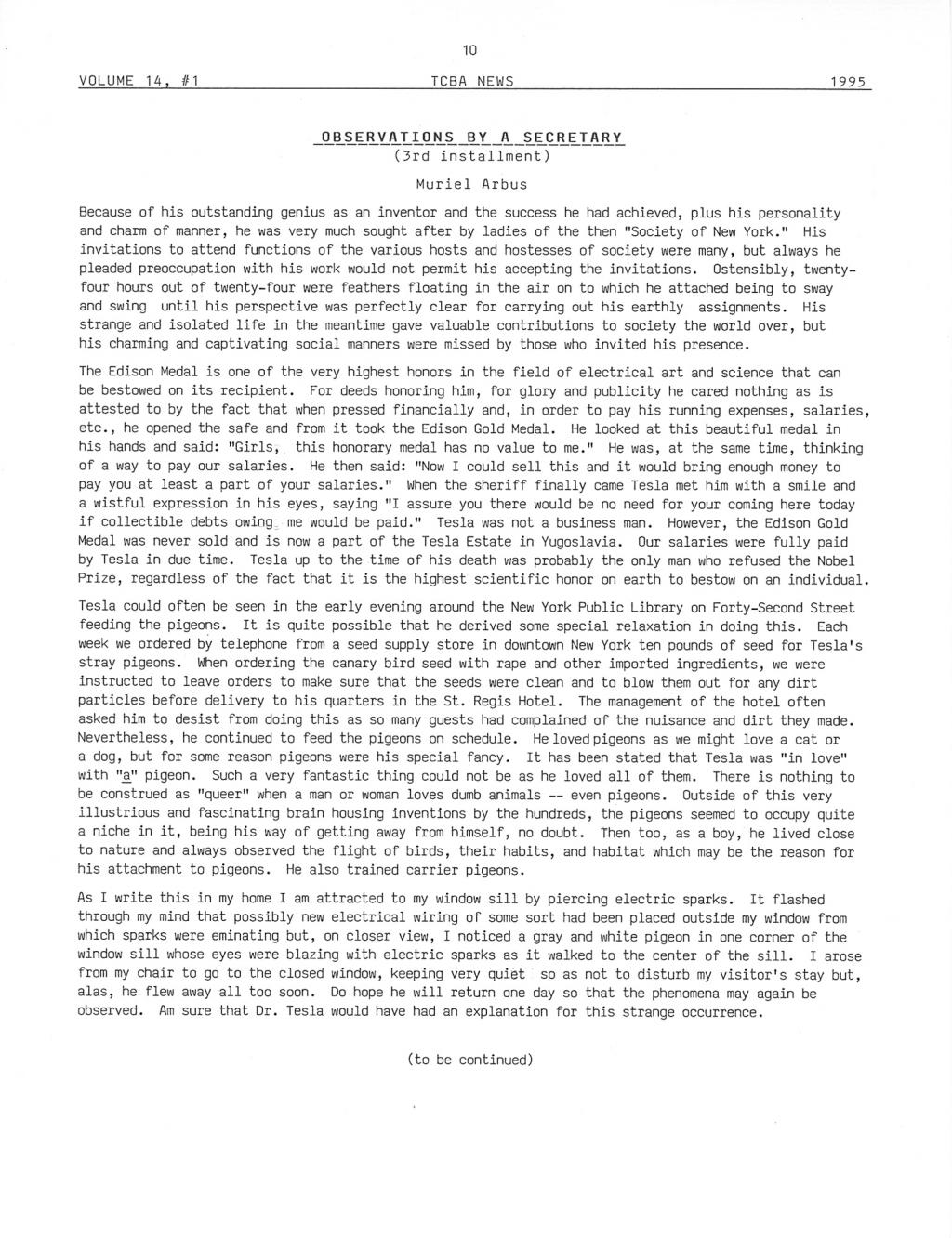