Those of you who corresponded around mid-August were informed that there would be a delay in replies coming from this end. The reason was due to an emergency gall bladder operation. The surgeon informed me that I was lucky to have caught it in time. The organ was gangrenous and full of stones. He had lost a patient to this same condition not long ago. Thanks to laser surgery, I was home recuperating two days after the operation. Believe me, I'm counting this as a blessing.

I wish to thank the members for their patience and also those aware of the situation who sent get-well messages. All were greatly appreciated.

Orrin E. Dunlap was a newspaper editor, author, and photographer. During his lifetime, he interviewed famous scientists and inventors including Lord Kelvin, Thomas Edison, and Nikola Tesla. Recently, a gift of $300,000 in cash was donated to the Niagara Falls Public Library by the family of Mr. Dunlap. Along with the cash donation were numerous glass plate negatives, volumes of newspapers, huge scrapbooks, letters, autographs, and so on. Donald E. Loker, president of the library, predicts that it will take until the beginning of the next century before the items are catalogued and available for public review. (tip from Herb Force)

TCBA does not hold any Teslathons or formal meetings. However, every once in a while a member will drop in for a visit. Such was the case this past summer when Randy Burk stopped in for an exchange of TC talk. But before visiting this area, Randy stopped off and visited with Ed Wingate. Randy had some video shots of Ed's double Tesla coil (see Volume 13, #3). I also took some video pics with Randy's camera while he was getting zapped with one of my medical spark gap machines. Thanks for stopping by Randy, it was a pleasure to meet you.

Shortly after Randy's visit, I received a call from Tom Vales. Tom has been working with Anthony DeAngelis on a large Tesla coil project for the Boston Museum of Science. 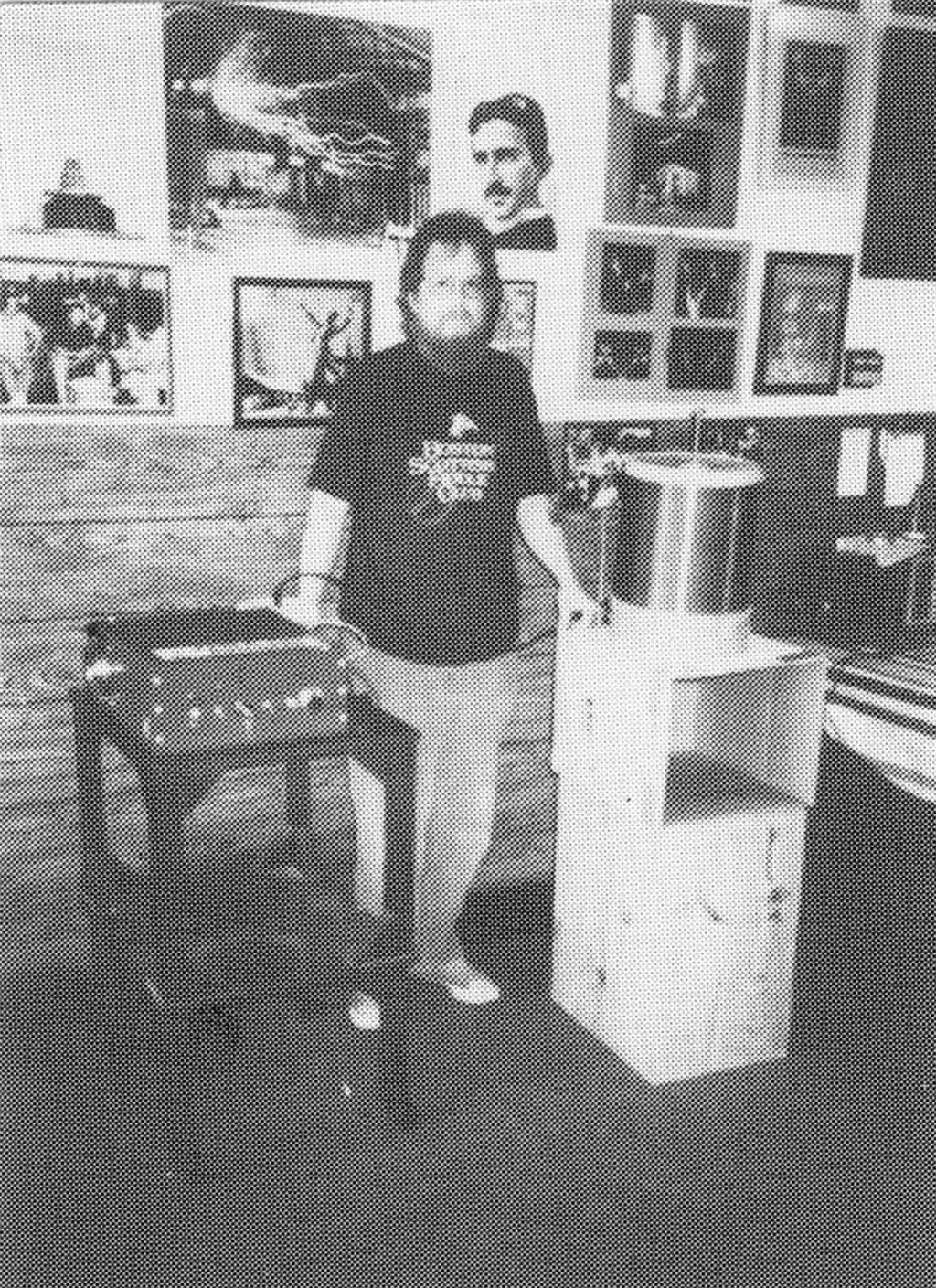 Next thing I know, Tom and Phyllis Vales showed up at my driveway with a pickup truck full of paraphernalia. The event turned out to be a miniature Teslathon.

After numerous demonstrations with interesting devices (strange bulbs, etc.), Tom unveiled his piece de resistance - a high powered solid state Tesla coil project. The design is a modification of Duane Bylund's excellent model. Tom and Duane have been in contact discussing each others current solid state TC investigations. This model is a real performer and Tom showed a number of exciting experiments. The photo at the right shows Tom and his equipment.

Before departing for home, Tom took his camera in hand and burned up about two roles of films photographing just about every component in my collection. He and Phyllis promised a return trip bringing another truck full of goodies.

TCBA hopes to bring you some information on the work that Anthony DeAngelis and Tom have done at the Boston Museum of Science.