The manuscript for the recent Volume 11, #4 was mailed to the printer just prior to my August entry into the local hospital for major surgery (I no longer have the left hip joint that I was born with). If it weren't for my wife Ruth, volume 11, #4 might have been late in its distribution. Ruth took over the task of keeping the books, answering the mail, taking telephone calls, stuffing envelopes, and seeing that the newsletters were delivered to the U.S. Postal Service on schedule. All of this was above and beyond the nine-to-five trek to her place of employment, coming home and fixing meals, seeing to it that I was dressed, undressed, bathed, and escorted to the bathroom during the night. The stress was beginning to show.

Then came along Volume 12, #1. Although my strength was coming back, I was in no position to spend hours in front of a typewriter. In fact, it was quite some time before I was able to sit in a regular chair. Much of what you read in this issue is due to Ruth's efforts. Unofficially, Volume 12, #1 is dedicated to her.

By the time you read this issue, I should be fully recovered and working on Volume 12, #2. But before I forget, I do want to express my appreciation to those of you who showed some concern for my well being by way of your correspondence and phone calls.

The illustration on our cover is taken from the 1935 Spring issue of Mechanics & Handicraft. The accompanying article, “You Can Get 24-Inch Spark From Oudin High Frequency Coil,” provides instructions on the construction and use of a large single-ended direct-coupled oscillation transformer. A number of interesting experiments are included.

In describing the differences between a Tesla coil and an Oudin coil, the author repeated the same error that permeated the technical literature of yesteryear. See “Tesla Coils Resurrected.”

Nikola Tesla died on January 7, 1943 at the age of 87. While his lifeless body lay stretched,, across his bed, the world that he helped to create - with polyphase currents, radio communications, etc. - continued to function at a hustle & bustle pace (at the time, we were involved in a world conflict).

Said the New York Times: “If ever an inventor satisfied the romantic requirements of a Jules Verne novel, it was Nikola Tesla...His practical achievements were limited to the short period that began in 1886 and ended in 1903... And what achievements they were!...He belongs to the passing age of heroic invention of which Edison was the most distinguished exemplar - the age of technical poets who expressed themselves in generators, induction coils, and high voltages rather than in drama and verse and who were the real architects of this culture. If that abused word 'genius' ever was applicable to any man it was him.”

From the New York Herald-Tribune: “Mr. Nikola Tesla, the 'wizard' died the other day...His solid accomplishments were astonishing in scope...Granting that he was a difficult man to deal with and that sometimes his predictions would affront the ordinary human's intelligence, here, still, was an extraordinary man - a genius he must have been...His guesses were right so often that he would be frightening. Probably we will appreciate him better a few million years from now.”

TCBA is commemorating this event by reprinting two tributes:

This year marks the 100th anniversary of two events in Tesla's life. (1) In February of 1893, Nikola Tesla presented a lecture before the Franklin Institute at Philadelphia and then before the National Electric Light Association at St. Louis in March.

One of the highlights of Tesla's lecture was the revelation of a four-circuit system of communications. It was during these lectures that Tesla established the foundation for wireless telegraphy. Experimenters in this field did not achieve notable success until they adopted the four-circuit principle. This is the same system that Marconi utilized to establish a world-wide reputation as the inventor of wireless. For more about Tesla's lecture, see Volume 6, #3, pages 6-7.

(2) The year 1993 also coincides with the 100th anniversary of the Columbian Exposition. For more information on Tesla's lectures at the Columbian, see Volume 7, #3, “With Tesla at the Columbian” and “Tesla's Lecture on Mechanical and Electrical Oscillators.” 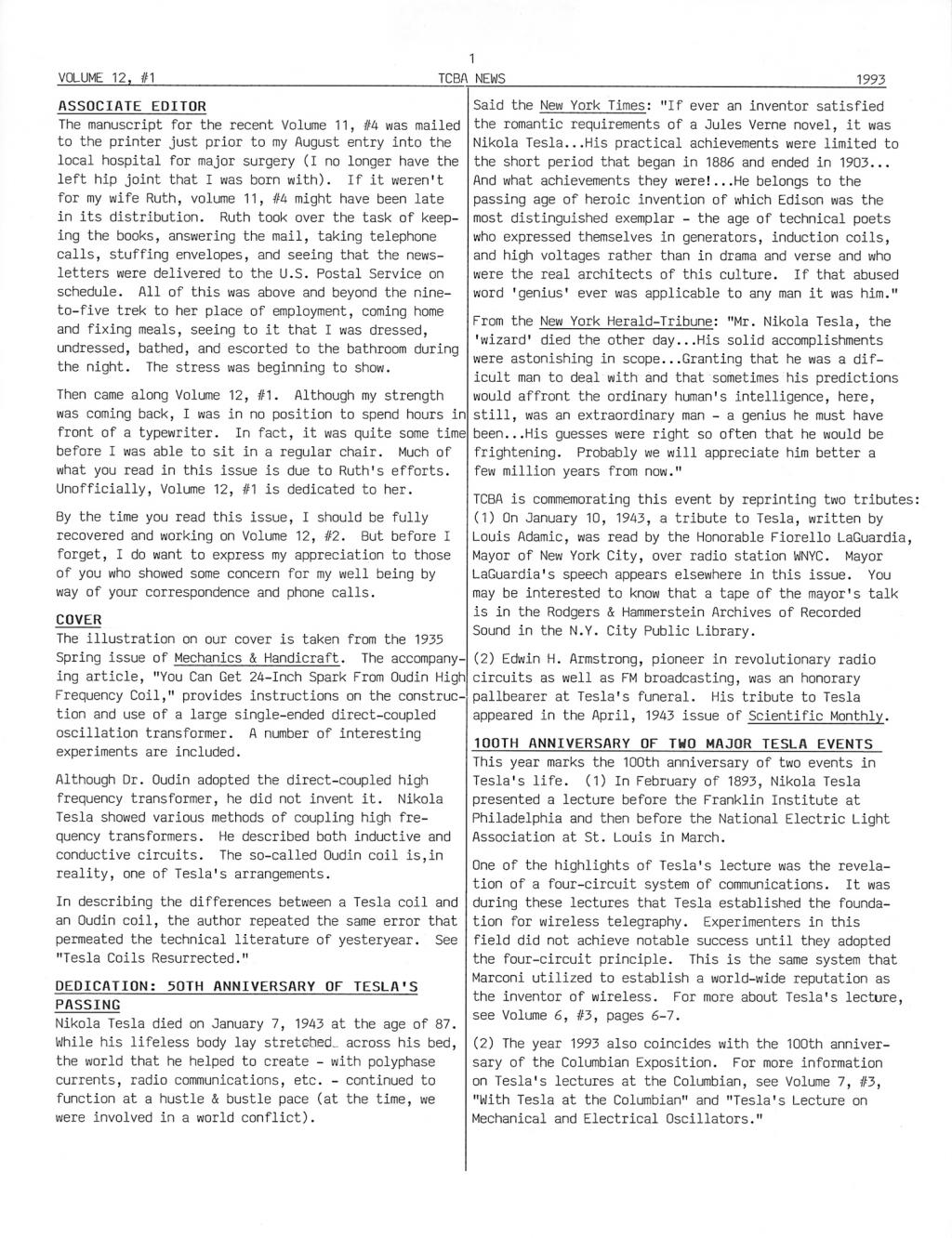