One of the most influential persons in my life was my high school football coach. He taught us more than how to win games. In one lesson, coach compared life to climbing a ladder. That is, each learning experience in life was a step upwards. He warned that there are those who take an apparent step upwards by pulling others down to the rung below. Coach urged us to make it a cardinal rule to improve ourselves by our own merits rather than to achieve a false self-esteem by degrading others.

In a new book on the career of the great English scientist Oliver Heaviside, author Paul J. Nahin has broken the cardinal rule. As an example, he attempts to raise the stature of Heaviside by degrading Nikola Tesla. Does Oliver Heaviside need that kind of assistance?

Author Nahin targets Tesla because the inventor did not provide complex mathematical explanations of his inventions. Tesla never claimed to be a mathematician and made it known that he would leave to others the mathematical resolutions to his inventions. Hey, what about Alexander G. Bell, Guglielmo Marconi, and the many other scientist/inventors who made their discoveries by pure intuition (no math), by accident (again, no math), or who achieved credit for inventions by theft (definitely, no math)?

Nahin also reveals his dislike for the Tesla biographies. Although there are innumerable examples of biographical accounts of the lives of scientists, it appears that only those on Tesla fail to meet his criteria. Has Paul J. Nahin joined that small group of historian revisionists who revel in degrading Nikola Tesla?

The Tesla Coil Builders of Richmond held their third annual Teslathon Gala at the home and lab of Richard Hull on July 18th. Over 35 people attended. Most notable was Jeff Mullins who flew in from San Francisco for a 3-day visit. Two major Tesla groups attended the affair with 3 members of the Toledo Ohio Tesla Coil Builders having the longest drive (12 hours!). The Tesla Coil Builders of New Jersey drove 7 hours and brought 3 members as well as a real nice combination rotary & series gap system similar to the one used at TCBOR. A small Tesla flea market saw the exchange of tapes, pictures, and cash for transformers, capacitors, and test gear.

The outdoor cookout and picnic was a big hit with the starved coilers. Much valuable information, ideas and coil talk was exchanged by the diverse collection of U.S. coil builders. Cameras flashed and video camcorders whirred as memories and data were recorded for later consumption. The TCBOR fired a one kilowatt tube coil along with several smaller coils in addition to the 2 kw Magnifier and the 14 kw “Nemesis” system. Jeff Mullins brought four large loaves of sourdough bread from California and they were consumed with soda, butter, and cream cheese during the wee morning hours. About eight of the die-hard coils stayed overnight and a minithon was held from 11 AM til 4 PM Sunday. Coilers from Virginia, Maryland, D.C., New Jersey, Ohio, and California were present.

An interesting article, “Fun With Tesla Coils,” by Charles D. Rakes appeared in the October issue of Popular Electronics. Mr. Rakes provides instructions on methods of finding the 1/4-wavelength resonant frequency of a Tesla coil secondary. Another interesting paper included in that issue reviews the classic experiments of Heinrich Hertz and demonstrates how they may be repeated. Mr. Rakes continues his series of informative articles in the November issue of that publication with “More Fun With Tesla Coils.” This installment features a variety of circuits that can be applied to Tesla projects. The November issue featured a biographical account of the work of “David Hughes: Electromagnetic Pioneer.” Anyone interested in the history of electrical development would find it of great interest. (tip from James DiMichele)

Thumb through any of the old science and mechanics type magazines of the 1960's and you'll find that most carried advertising featuring products by Morris & Lee. The company offered a variety of scientific devices for both school teachers and home experimenters. Two popular items offered by the company were Van de Graaff generators and Tesla coils. Today, the company goes under the name of Science First and is operated by Raymond and Nancy Bell. Franklin B. Lee, the company's co-founder continues to act as a consultant. Science First is the nation's second largest manufacturer of school science equipment. The company is located at 95 Botsford Place, Buffalo, New York 14216-2696 and offers a 44-page catalog featuring components and completed units in the physical sciences. (716) 874-0133 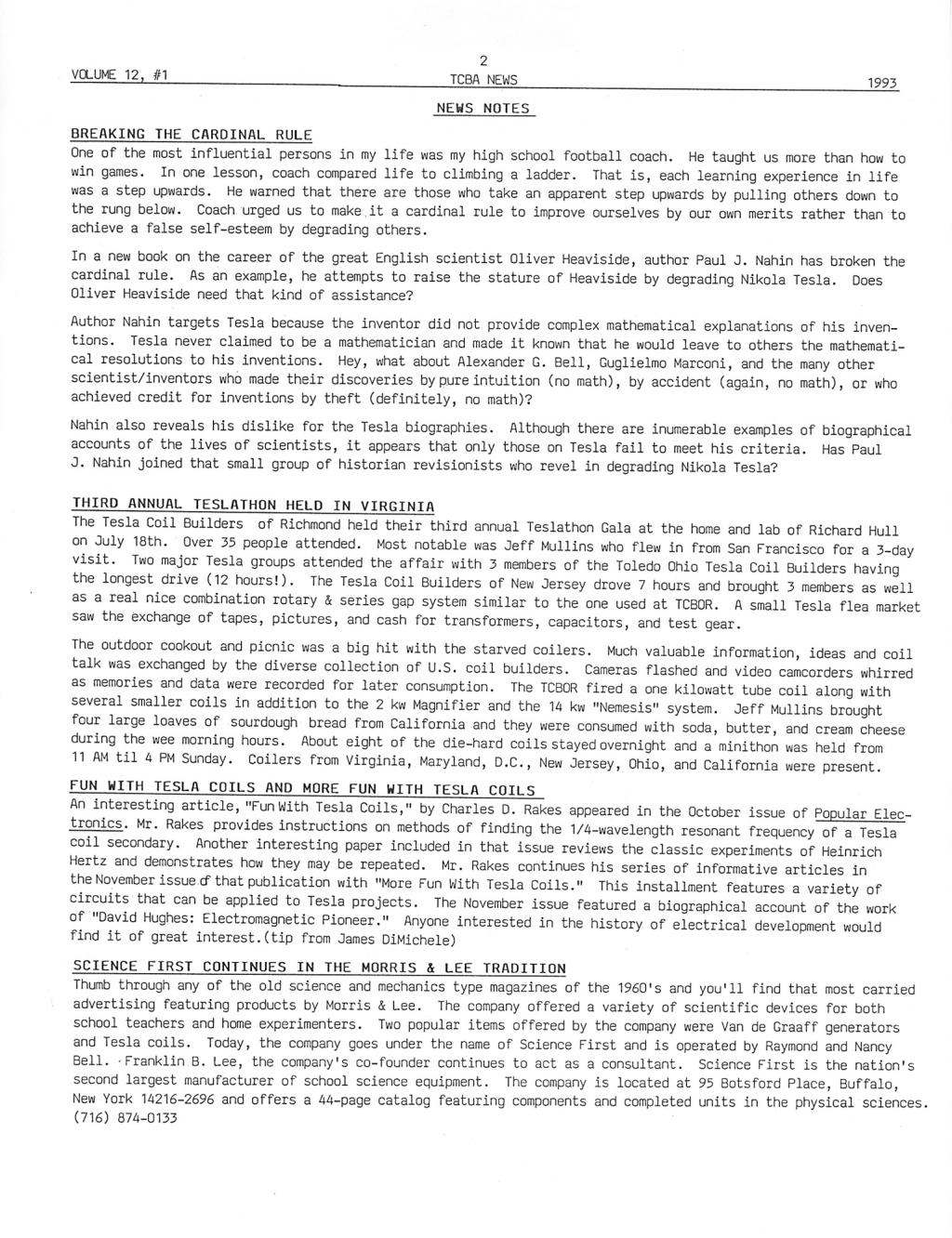