Not long ago, a young man stopped by my shop with a defective energy discharge capacitor. He had disassembled the unit in hopes of repairing it. However, he was dismayed over the interior damage and was somewhat puzzled at what he found inside. The interior of the capacitor consisted of a number of small inter-connected sections of very tightly wrapped conductive foil sandwiched with extremely thin sheets of polypropylene.

Only three sections of the capacitor were damaged, so we carefully dissected them. The young man was amazed at the thin foils and dielectrics used in the construction. We miked the foil at .002 (2 mils) inch and the polypropylene plastic dielectric was only .0005 (1/2 mil) inch thick. The experimenter wanted to know why the dielectric was so thin. He reasoned that a 20,000 volt capacitor would require a dielectric thickness of at least 1/8 inch (125 mils) to withstand the 20,000 volt potential. My answers to his questions form the basis for this article.

An alternating current applied to the dielectric produces dielectric polarization. As soon as the current reverses direction, the stretched orbitals try to resist the change in applied forces. The result is somewhat like trying to stop an automobile in motion and expecting it to quickly reverse direction. As the capacitor begins to try to charge in the opposite direction, the electrons have to reverse direction, and even though they are quite small, they still have properties of momentum which obey Newton's Laws of Motion. Not all electrons are able to change direction of travel, and the resultant action has both properties of kinetic and harmonic motion. The larger the mass of material between the plates, the more resistance there is to charge reversal.

The key element in all these different types of polarization and phase shift losses is the thickness of the dielectric. Thin dielectrics produce much less polarization and thermal losses, especially near resonant frequencies where both circulating currents and potentials increase dramatically. Most Tesla oscillator circuits see potential resonant rise on the order of double the applied rms potential. Current resonant rise is on the order of 500-1000% for small neon transformer powered circuits, and in the range of 1000-5000% for high power circuits operating in the 4-15 kva range.

Another major factor affecting dielectric performance is failure caused by internal ionization. Even in modern capacitor construction practice, the complete exclusion of gas pockets from the body dielectric insulation is virtually impossible, and often the economics of the application dictates the degree of gas pocket elimination from the insulation. Vacuum impregnation of the dielectric is frequently employed when the dielectric is to be highly stressed.

The presence of gas pockets can cause failure of the dielectric material through progressive discharge (corona) in the gas pocket (see figure 1). This is usually a function of the duration of the time of stress application and frequency as well as the degree to which the major insulation is stressed above the ionization threshold. 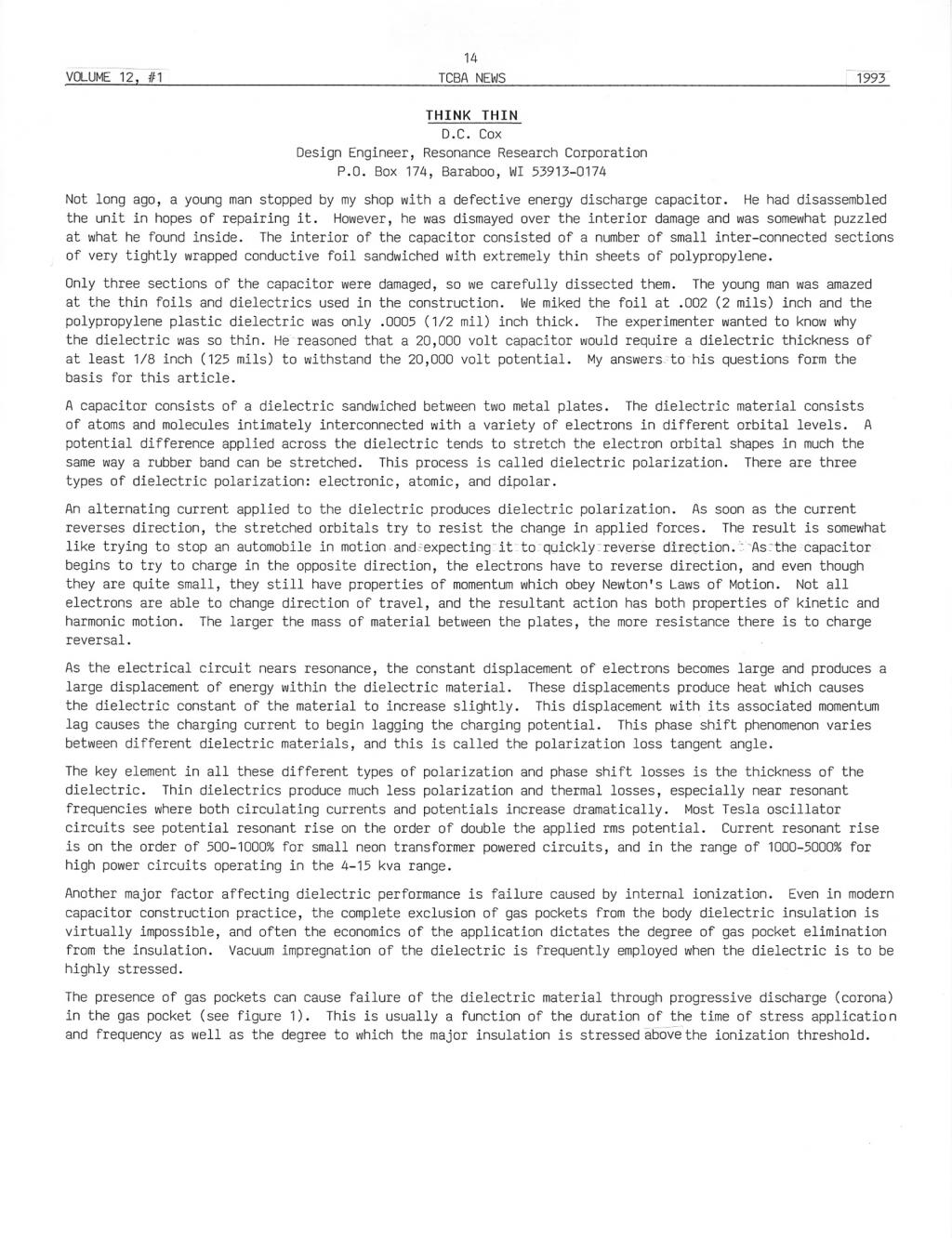