“As regards the rise of potential through resonant action, of course, theoretically, it may amount to anything since it depends on self-induction and resistance and since these may have any value.

“Thus coils of the proper dimensions might be connected each with only one of its ends to the mains from a machine of low E.M.F., and though the circuit of the machine would not be closed in the ordinary acceptance of the term, yet the machine might be burned out if a proper resonance effect would be obtained.”

The above remarks from Tesla basically reveal what a Tesla coil is all about! The definition of a Tesla coil should not depend on how we couple energy into a circuit, or on what kind of generator is used to drive the circuit. What we should be more concerned with is the principles of operation of a particular device. We need to stop thinking that the Tesla coil is a resonant air core transformer. The word “transformer” leads one to think that the Tesla coil works on the same principles as a regular transformer. Instead, we need to think of the Tesla coil as that, a coil; a series resonant coil being driven with a source of alternating current.

There is always something extremely novel and interesting in the duplication of Dr. Tesla's experiments, but it seems that at times such attempt is rather difficult. However, that may be due to the particular care exercised by Dr. Tesla in having his experiments exact to the minutest point, a feature which amateurs generally glide over. In the case given here, however, there will be no such difficulty in the making of a clock of this nature.

Not only is the clock unique in design, but rather serviceable if a constant E.M.F. is available. It makes an adorable clock for the amateur, even though it varies slightly from correct time. This, of course, depends entirely on the regulation of the resistance in the controlling circuit.

A clear walled glass jar or celluloid jar is employed, a well balanced metal disc of copper or silver mounted in such a way that it is free to rotate in the centers of two jeweled bearings. These may be obtained from a clock and easily inserted by drilling a hole thru the glass or celluloid jar and securely mounting them therein with a copper washer on each side to prevent any escape of liquid.

On each side and equi-distant from the periphery of this metal disc are placed two metal electrodes similar in nature to the metal disc, i. e., either silver or copper. On the disc itself is fastened a thin glass thread pointer or a thin annealed iron wire, the latter being preferred.

The jar now is filled with a solution of silver nitrate if a silver disc has been used, or copper sulfate if a copper disc and copper electrodes have been used. (Electrodes can be copper strips.) If a magnet is now placed in front of the dial so that its action will take place upon the thin annealed iron wire, the disc inside can be rotated to any desired position. Current from several storage cells is now turned on.

The result is that an electrolytic action takes place, metal being deposited on one side of the movable disc while it is taken off on the other side slowly and with remarkable regularity. This causes the disc to rotate slowly, due to a gravitational action, and if carefully regulated a clever timepiece is the result.

The bluish color of the copper sulfate solution makes a very pleasing aspect in a home or library, the experiment itself being one of the least difficult to reproduce. The disc is about three inches in diameter and the electrodes at each end about 1/2 inch wide and 4 inches long. About three volts E.M.F. will be sufficient if the amperage is quite constant.

According to Dr. Tesla, a slow deposit is more desirable and for this reason a very narrow plate will answer the purpose. If a wider plate should have been used and the disc rotate too rapidly when current is applied to the terminals, the electrodes of both sides may be coated with paraffin so that but a thin space which is cleaned of this paraffin will be effective.

The plate should be slightly wider than the thickness of the disc itself. The disc could likewise be used as one electrode and instead of the two end strips only one would be employed.

Another essential is that the bearings should be made non-corrosive and at the same time it would be better to lubricate them with a small drop of watch oil. Then when the jar is filled with the electrolyte, the oil will be retained in the bearing zone preventing a deposition of metal upon this zone and corrosion to a great extent. 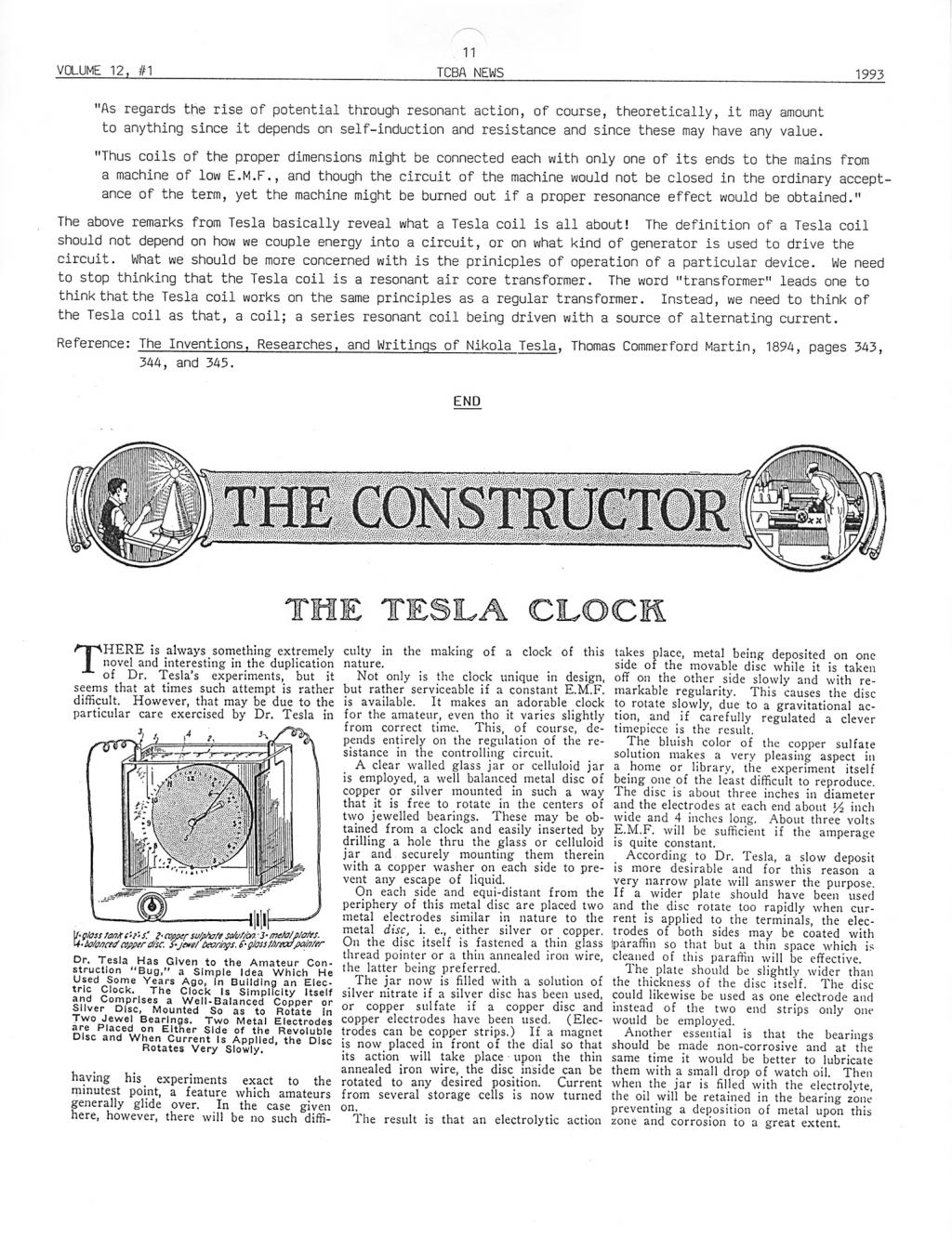