Who's Who in Radio

A. Stein, Jr., associated himself with radio work in 1903, serving until 1910 as radio engineer. He was commercial engineer for the District & Printing Telegraph Co. from 1910 to 1916. He joined the Marconi Wireless Telegraph Co. in 1916, and served as chief engineer and works manager at the works at Roselle Park, New Jersey. At present he is managing engineer of the radio engineering department of the General Electric Co., Schenectady.

John Stone Stone was an experimentalist in the research laboratory of the American Bell Telephone Co. in 1890-99 and made investigations of telephones without wires in 1892. He was consulting electrical engineer and expert of the Ladd Wireless Telephone Syndicate, experimenting on directional signaling, in 1899. He was retained in 1900 by the Stone Wireless Telephone Syndicate, and in 1902, when the Stone Telegraph & Telephone Co. was organized. He is the author of many papers on wireless. He has been granted more than one hundred United States patents in the radio field and a correspondingly large number of foreign patents. He is fellow of the American Academy of Arts and Sciences, fellow of the American Association of Advanced Science, fellow and past president of the Institute of Radio Engineers and member or associate of various other societies. His investigations have been principally directed along the lines of eliminating interference in wireless telegraphy. He studied at Columbia and Johns Hopkins universities

A. Hoyt Taylor is a physicist and radio expert. He was at one time professor of physics and director of the radio station at the University of North Dakota. He was a lieutenant in the naval reserve in 1917, and was district communication superintendent of the Ninth, Tenth, and Eleventh naval districts. He was transatlantic communication officer in 1917-18, and is now a commander engaged in research and development work in connection with aircraft radio. He is the author of numerous papers on electrical measurements and radio subjects. He was educated at Northwestern University, receiving the degree of doctor of science, and holds the degree of doctor of philosophy in electrical engineering from the University of Gottingen, Germany.

Hawley Otis Taylor is a radio physicist. He was instructor in physics at Cornell University from 1907 to 1913 and later became research physicist for the National Electric Signaling Co. and special adviser to the Submarine Defense Association. He devised signaling methods by means of which enemy scouts could make known their presence. He later investigated means for static reduction and developed an acoustic telephone while serving in the capacity of radio engineer in the signal corps of the army. He became consulting physicist to the United States bureau of standards in 1919. At present he is in charge of the electrical department for the rehabilitation of ex-service men at Franklin Union, Boston. He has made many valuable contributions to the radio art. He was born in 1876 at North Derby, Vermont. He received the degree of bachelor of arts from Cornell University in 1909 and that of doctor of philosophy in 1913.

Willis H. Taylor is both a capable radio engineer and a patent lawyer, having ably defended several very important patents. He served two years with the American Expeditionary Force in France as captain and chief of the radio division of the signal corps, and cited for exceptionally meritorious service. He was born in 1894 and received the degree of mechanical engineer from Stevens Institute of Technology in 1915.

Nikola Tesla is one of the foremost of the world's electricians. He was graduated from Karlstadt in 1873. He devoted study to electrical investigations, and went to the Polytechnic School at Gratz, where he prepared for work as a professor of mathematics and physics. He visited America in 1882, when he captured the attention of the whole world with his fascinating experiments on high-frequency electric currents. Since 1890 he has devoted himself to studies of alternating currents of high frequency and very high potentials. He was born at Smiljan, Sika, Dalmatia, in 1857.

A. Van Dyke entered the radio field in the earlier days, making his début in 1911. He performed a great deal of important research work for the National Electric Signaling Co., which was at one time a very important factor in the wireless field. He also did important research work on high tension currents for the Western Electric Co., after which he served as an instructor in engineering at the Carnegie Institute of Technology at Pittsburg. Mr. Van Dyke is now in charge of the development and design of radio receiving apparatus in the General Electric Co. laboratories. He was graduated from Yale University in 1911 as an electrical engineer. 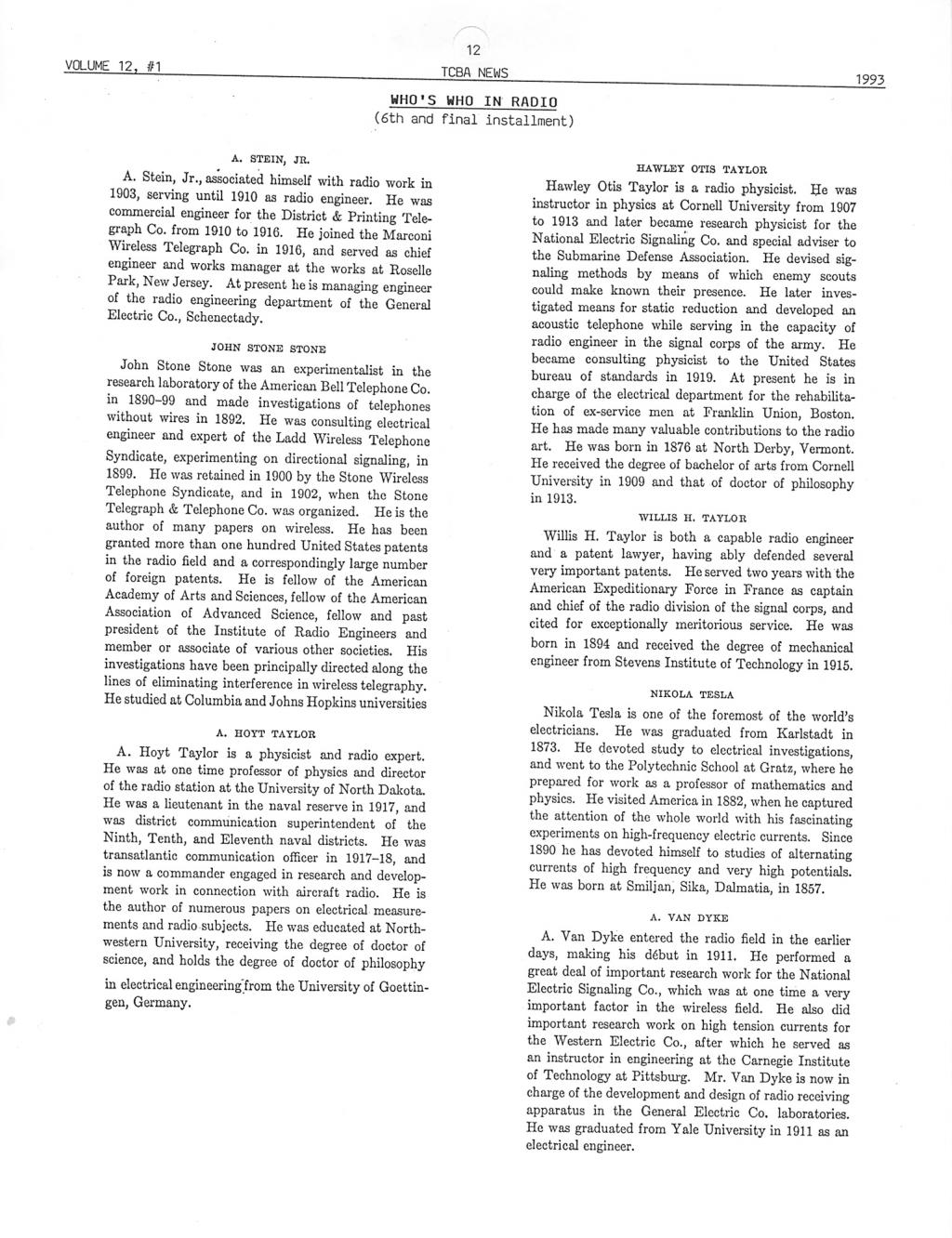