On last Thursday night, here in our city of New York, a man who was 87 years of age died in his humble hotel room.

His name was Nikola Tesla. He died in poverty, but he was one of the most successful men who ever lived. His achievements were great and are becoming greater as time goes on. Nikola Tesla could have amassed hundreds of millions of dollars, could have become the richest man in the country, in the world, if he wished for riches.

Nikola Tesla was a great humanitarian, a pure scientific genius, a poet in science. He did extraordinary, amazing, miraculous things during his life amongst us. He did them simply to serve mankind, and for his services he did not charge anything.

Money - he did not care for it.

Honor - who was anybody to honor anybody else? That was his attitude.

Gratitude - he did not expect or demand it.

Nikola Tesla did not care to be paid for anything he did for the human race. He simply functioned according to his natural genius, which had come to him in the land of his birth, Yugoslavia, as a son of his mother.

Now this extraordinary man is dead. Or so they say. The papers on Friday told us he died. His body was found still on the bed in his hotel room in this city. And the newspapers published obituaries and editorials summarizing his life and work, and they told of his personal habits and eccentricities.

Tesla, they say, is dead. In a funeral parlor in this city there is all that is left of the person.

The funeral services will be held on next Tuesday afternoon at four o'clock in the Cathedral of St. John the Divine. People will come, many people, people of all walks of life - humble, unknown people and people who are famous - scientists and industrialists, and others.

And that will be all right, it is the customary thing to do.

The real important part of Tesla lives in his achievement, which is great, almost beyond calculation, and an integral part of our civilization, our daily lives, our current war effort.

Today we on this program do not mourn Tesla, do not honor him, for we know that Nikola Tesla would not care for that.

Why mourn Tesla? His life is a triumph. We who are in this studio today are just thinking of him, talking of him among ourselves and to you who are listening to us, and we are playing some music and singing a few songs which we think Nikola Tesla would have liked.

We celebrate his achievement on earth, his great triumph, which is our triumph - the triumph of all peoples on the earth.

We celebrate his contributions to our life, to the sum-total of civilization and human potentialities in America and everywhere, which will be as permanent as man himself.

We are talking about Tesla, celebrating the fact that we belong to the same species to which he belonged while amongst us.

He is a feather in the cap of the whole human race - and Yugoslavia and America can be specially proud of him.

A few years ago a fellow scientist of Tesla's - Dr. A.B. Behrend, also an American - wrote about him in his book on the induction motor - the motor which owes its existence to Tesla and which now is in the very center of nearly everything that moves on wheels in this country.

Said Dr. Behrend: “Were we to eliminate from our industrial world the results of Tesla's work, the wheels of industry would cease to turn, our electric trains and cars would stop, our towns would be dark, our mills and factories dead and idle. So far-reaching is his work that it has become the warp and woof of industry. Should Tesla's work be suddenly withdrawn, darkness would prevail and we would slump into barbarism.”

So it is true - Tesla is not dead. He is very much alive amongst us. Among us is the triumph of his life, his achievement which we celebrate here. We do not honor him; we are gathered to feel the triumph of one human life, and to share our feeling with those listening in. 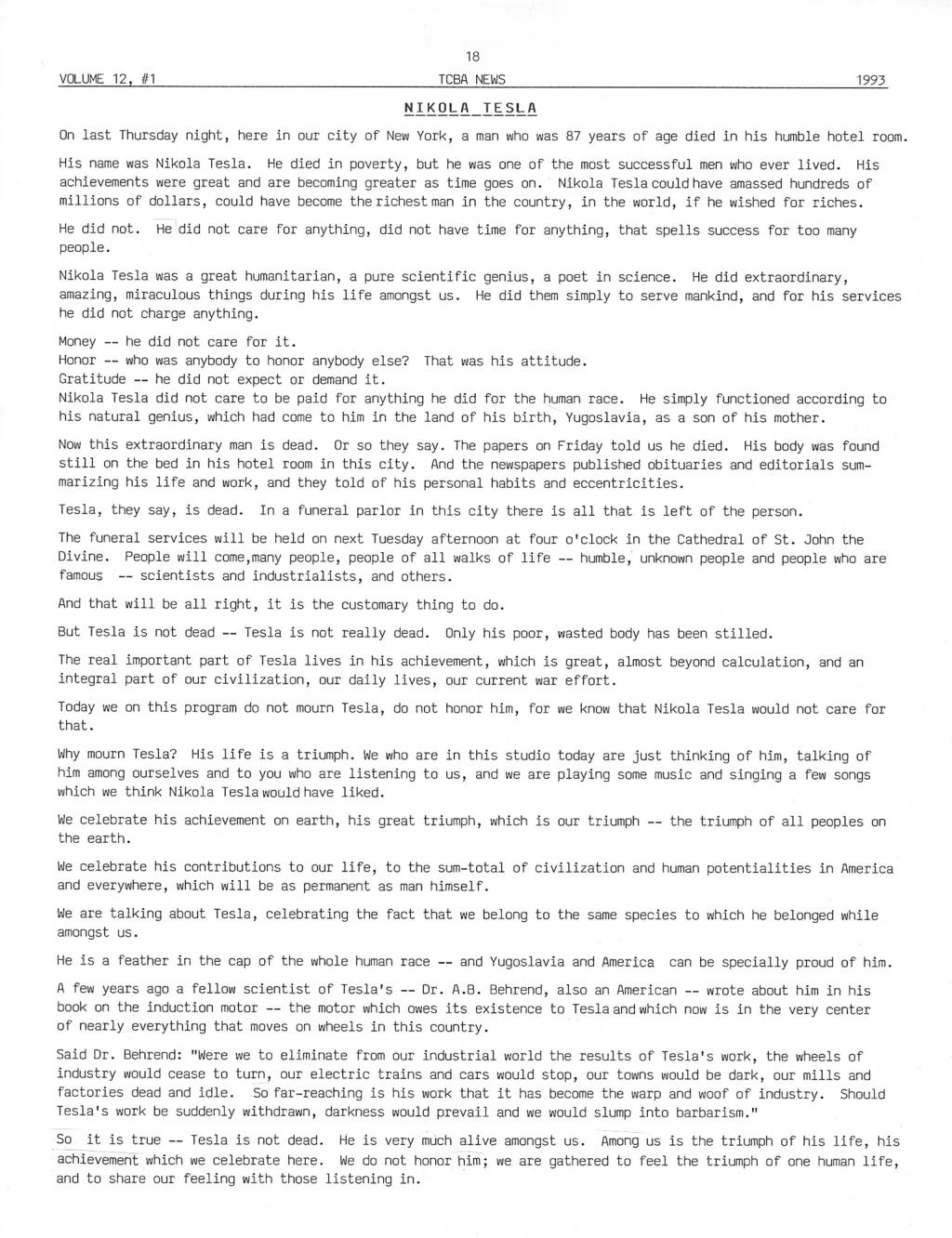