Do you need an unusual or hard-to-find item for your project? The SMALL PARTS COMPANY might be able to provide it. The firm offers just about anything the gadgeteer might need in both metallic and nonmetallic states. Another plus is that you can order items in small quantities. Catalog #14 is now available and may be obtained by writing to the company at P.O. Box 4650, Miami Lakes, FL 33014-0650 (305) 557-8222

TCBA recently reported information on the introduction of a new and efficient source of light based on Tesla's experimental work with electrodeless bulbs excited by radio frequencies. The lamp is being distributed by Philips, Inc. However, it is limited to industrial uses. The September issue of Popular Science announced that the “Next Wave of Efficient Lighting” will be introduced by the Diablo Research Corporation of Sunnyvale, CA. The map uses an RF source and an internal inductor to excite vapors inside the bulb. Unlike the Philips' product, this 20,000-hour electrodeless bulb called E-Lamp will include a version for home use and will be priced around $20.

A New Book on Niagara Falls Refers to Tesla

A new book, “Niagara: A History of the Falls,” by Pierre Berton contains several pages which mention Nikola Tesla. One of the trademarks of the 50 books that Berton has written is his interest in characters behind the stories. Berton's favorite is Nikola Tesla, “a guy who's wandering through a park in Budapest reciting Goethe, when he suddenly figures out the system of alternating current in his head...He is the reason, of course, why this is the industrial heartland of northeastern United States and southwestern Ontario.” The book is published by McClelland & Stewart and is selling for $29.95. (Herb Force)

An ambitious tourist attraction known as Falls Street Faire and Falls Street Station located near Niagara Falls, NY appears to have come to an inglorious end. The Falls Street Faire portion was intended as an amusement center featuring many carnival-like attractions. One of the sections was to house a replica of Nikola Tesla's laboratory. There is presently disagreement as to whether to renew or disband the project. (Herb Force)

Statue in the Park

Efforts are being made to have a statue of Nikola Tesla placed in New York City's Bryant Park, the same location where Tesla often visited to feed the pigeon population. The bust being offered is one done by sculptor Ivan Mestrovic. (Tesla Memorial Society Newsletter)

Senator Al Gore's book, “Earth in the Balance,” tells how “a Russian emigre named Nikola tesla had invented a new way to use the form of electricity called alternating current, which could cover relatively long distances with only modest losses in power.” I have not read the book but Toby Grotz of TESLA, Inc., stated that “this is a must book for anyone interested in environmental matters.” Of course, we all know that Tesla did not emigrate from Russia.

Several members have complained about the inability of obtaining the Barnes & Noble publication of T.C. Martin's work, “The Inventions, Researches, and Writings of Nikola Tesla” (reported in Volume 11, #4). I am not surprised. This has happened to me in the past. Although B&N continues to advertise item #1774447, B&N informed one subscriber that “we do not carry it.” I called B&N and inquired about the discrepancy. I was told that they had received 5000 more copies in September. Sometimes the right hand doesn't know what the left hand is doing. My advice is to try again and be sure to give the stock number 1774447 as well as the title. I'm sure that you will get your copy. 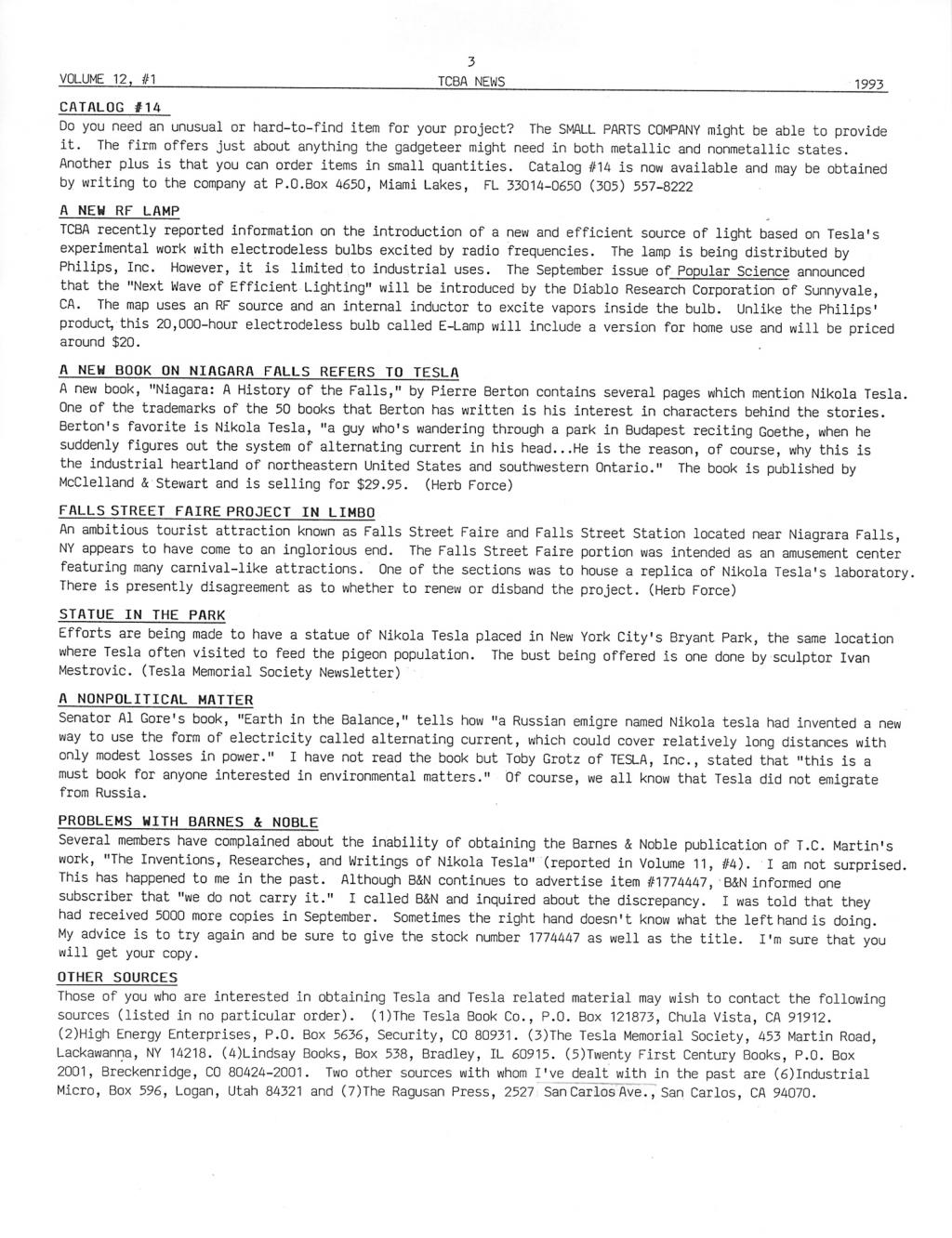