The Progress of Science

With the death of Nikola Tesla in New York City on January 7th, 1943, there passed a man whose inventions in the field of alternating current power transmission exerted a profound effect upon the development of the electrical industry, whose investigations in the field of high frequency currents brought him to the threshold of the discovery of wireless signaling, and phase prophecy of the advent of radio broadcasting nearly forty years ago, with all its social implications, has been fulfilled with an accuracy which is almost uncanny.

He was born of the Serbian race in 1857 at Smiljan Lika on the then borderland of Austria-Hungary. After attending the local schools, he finished his studies at the Polytechnic School of Graz, Austria, and at the University of Prague. Specializing in physics and mathematics, it appears that at the Polytechnic School he became acquainted with the rotating electrical machinery of that day and was much impressed by the mechanical weaknesses and general undesirability of commutators and brushes, an observation which was later to lead to his most important invention. After spending a few years obtaining practical experience in the electrical art at the centers of activity on the continent, in 1884 he came to the United States and secured employment at one of the Edison companies which were then engaged in the development of the direct current lighting system.

In the succeeding years, the idea of eliminating brushes and commutators by means of a rotating magnetic field began to take form in his mind and resulted in the invention of the induction motor and the polyphase transmission system. In 1887 the Tesla Electric Company was formed to develop these ideas and shortly thereafter the Westinghouse organization, appreciating the possibilities of the system, took if up as a major project. The tremendous potentialities of the alternating current system were explored and extended, and as its advantages became more clearly apparent, other organizations bent their efforts in the same direction. On this part of Tesla's career much will probably be written by men whose actual contact with the work qualifies them better than the writer to speak.

The work of practical design and exploitation having passed into hands more able to carry it on, Tesla began a series of painstaking investigations of the effects of high frequency, high voltage currents, which were to bring him to the brink of the discovery of radio signaling. It is not clear from his lectures what the motivating force was which initiated these investigations. He appears to have started by utilizing the ordinary spark induction coil, but energized it by specially designed alternators giving frequencies of the order of 10,000 cycles. Apparently he observed and understood the effects of resonance and distributed capacity in the equipment, for we find him, in order to produce currents of still higher frequencies, proceeding to the invention of the oscillation transformer with its primary excited by currents from the discharges of a condenser across a spark gap - the now well known “Tesla Coil.” With this mechanism he produced brush discharges at extraordinarily high voltages, and demonstrated many new and striking effects.

His lectures, delivered in the years 1892 and 1893 in the United States and Europe, disclosed a long series of experiments relating to the application of these currents for the production of light in various ways from evacuated filament-less tubes. 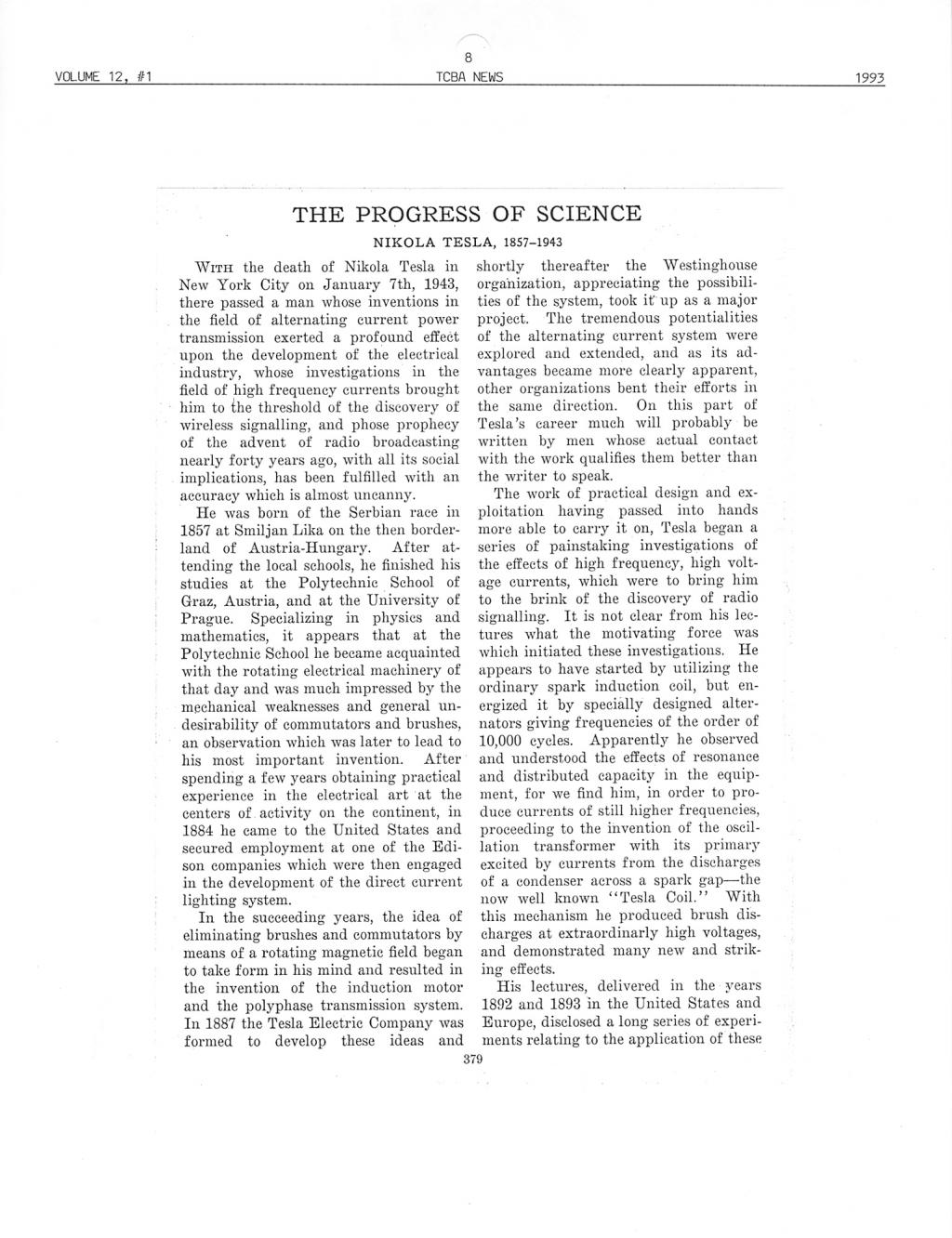