There is in the lecture delivered before The Franklin Institute in 1893 a proposal of a method of signaling “without the use of wires,” which, had it been followed up experimentally, might well have led to the discoveries which were later to be made by Marconi. It seems to have been some kind of intuition that led Tesla to propose nearly all the means by which radio signaling was originally practiced. He proposes to disturb “the charges of the earth” by setting up alternating or oscillating currents in an elevated conductor connected to an alternating current machine or to one of his oscillators whose other terminal is connected to the earth. As a receiving means he proposes to set up an elevated conductor resonated to earth to respond to the transmitter. All that he failed to describe, from an apparatus standpoint, was some suitably sensitive device to indicate or to detect the received signals.

There is a very reasonable possibility that had Tesla proceeded experimentally along these lines, he would have met with success. It would not have been the first time that an important discovery was made by following an erroneous theory.

For many years Tesla conducted experiments in a laboratory erected in Colorado, and later at a plant located at Warderclyffe, Long Island, to follow out his theory, now extended to include also the transmission of power by “wobbling the charges of the earth.” No technical account of these experiments has ever appeared.

Yet in his last publication on the subject there appears what might almost be termed a vision of the destiny of radio, so clearly did he forecast its all important field of utility and service - broadcasting. A part of it is quoted herewith from the Appendix of his book, published in 1904, entitled “Experiments with Alternate Currents of High Potential and High Frequency.” Referring to his plans for the utilization of his own system he states:

I have no doubt that it will prove very efficient in enlightening the masses, particularly in still uncivilized countries and less accessible regions, and that it will add materially to general safety, comfort and convenience, and maintenance of peaceful relations. It involves the employment of a number of plants, all of which are capable of transmitting individualized signals to the uttermost confines of the earth. Each of them will be preferably located near some important center of civilization and the news it receives through any channel will be flashed to all points of the globe. A cheap and simple device, which might be carried in one's pocket, may then be set up somewhere on sea or land, and it will record the world's news or such special messages as may be intended for it.”

Of course the instrumentalities for practicing broadcasting were not then in existence. Tesla was classed as a visionary and his prophecy was forgotten. What harsher terms might, with justice, be applied to many of us who helped produce the instrumentalities with which broadcasting was eventually accomplished! We applied them to point-to-point communication, failing completely to realize the significance of Tesla's words. 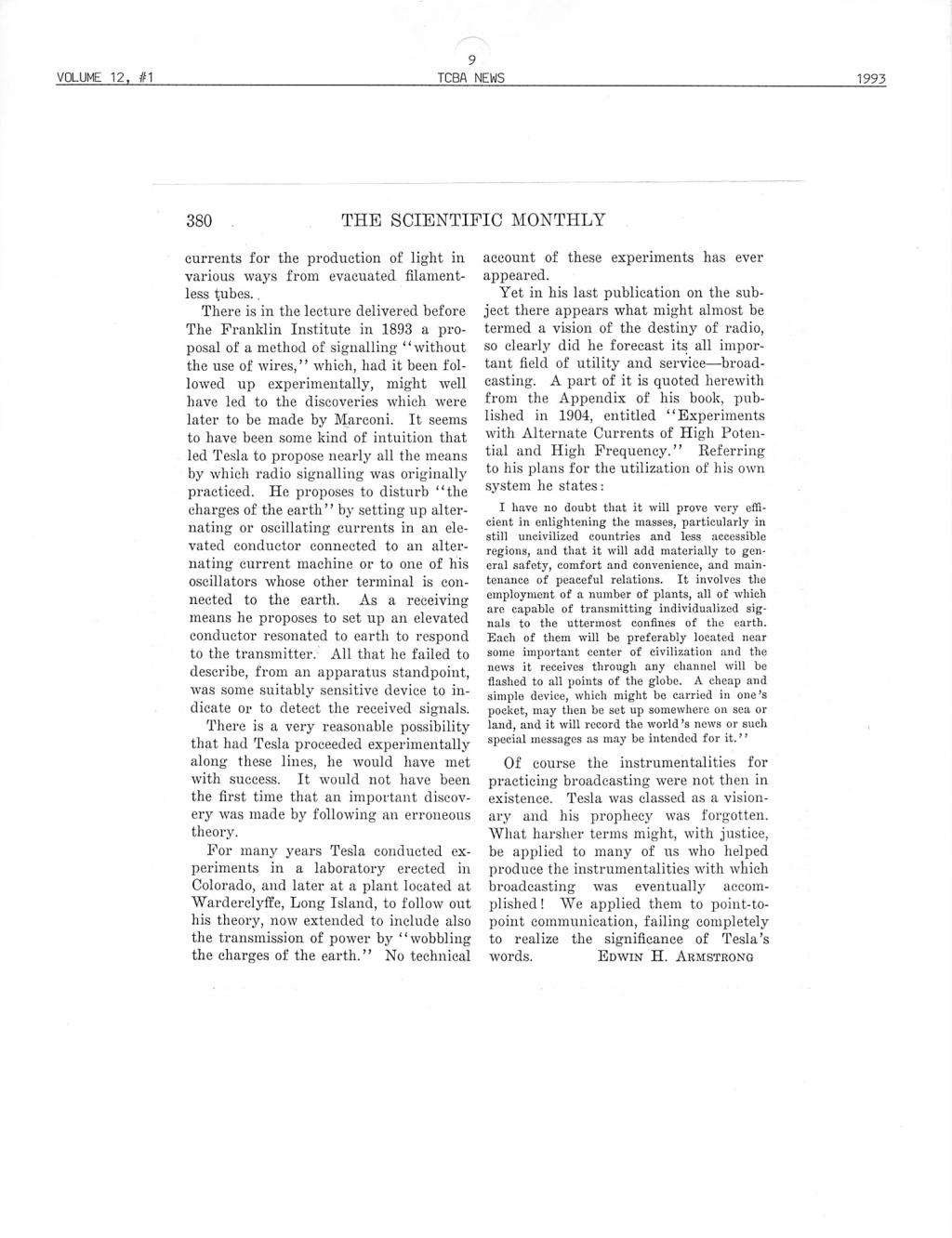