There are examples of modern solid state Tesla coils. The most common is the simple flyback oscillator type system with 1" sparks. Special solid state auto ignition coil drivers can produce 3" arcs. These are not true air core Tesla coils. The shining example of solid state success was Duane Bylund's magnifier like system featured in the September 1991 Radio-Electronics magazine. A lot of research in this solid state Tesla coil area is currently being carried out in England by Alan Sharp. Still, the results with solid state devices allow for only limited power and low spark output possibilities, at the current state of the art.

The true vacuum tube is evacuated to an extreme degree. The current carriers within such devices are electrons. The current handling capabilities of such devices, even in larger sizes, is limited by the emission efficiency of the filament. Such tubes are referred to as “hard tubes” (for hard or high vacuum - .0001mm of pressure or less). Normal atmospheric pressure is a little over 760 mm. Such tubes can switch on and off very fast, and an are easy to control over a very large range with simple circuitry. They can be had in sizes which easily handle 30,000 volts or more. They withstand internal temperatures where the metallic plate element can glow cherry red! Thus, hard vacuum tubes seem to have only one single flaw that limit them from becoming the perfect switch and that is they are limited to just a few amps continuous current or about 100 amps peak pulse currents. In other words, they are relatively high “on resistance” switches. (they fail criterion #3 and #5)

The commonly encountered tube coil is not using the vacuum tube as a commutating switch for a capacitor in the strictest sense. Instead, it is an element in a common form of oscillator where one of the oscillator coils is coupled to a resonator. Nonetheless, the unit might be considered as a tesla coil due to air core coupling, but not by the normal capacitive discharge method.

The earliest tube type Tesla coils for amateur builders were pioneered by Harold P. Strand who produced numerous magazine construction articles around this link coupled oscillator design. John Freau is one of the most prominent of the current researchers in high power tube coil systems. John has also investigated the use of the vacuum tube as a true switch in a capacitive type tube system. The results have not been very encouraging. His staccato mode system featured in a recent TCBA NEWS provides very good performance from a specially operated vacuum tube oscillator by lowering the duty cycle or pulse rep rate drastically. This allows very long sparks from a tube system with low average input power albeit with a low firing rate.

Gas filled tubes are a special case of the vacuum tube and offer promise as an optimal switch device. In this form of tube, a hard vacuum is pulled and then a gas or gas mixture is pumped back into the tube. This leaves the tube “soft”, often with a few millimeters of pressure resulting from the backfill of gas. Such tubes can perform amazing feats of switching. These tubes are often called Thyratrons. The most common Thyratrons are of the mercury vapor type where the charge carriers are ionized mercury vapor which allow the electrons from the filament an immediate, low current path from the cathode to the plate. Such thyratrons can handle tens of thousands of volts at thousands of amps! The problem comes with de-ionization. The metal vapor is slow to de-ionize and the turn off times of these tubes are in the multi-millisecond range, (about 1000 times too slow for our ideal switch - failing only criterion #6.).

During World War II, the need for a special “ideal switch” for use in radar pulse generators became of paramount importance to the war effort. While the search was on, many radar sets used common rotary spark gaps to achieve the critical functioning required. Such systems persisted into the late 40s, and represent the last gasp for common use rotary spark gap systems in power commutation systems. 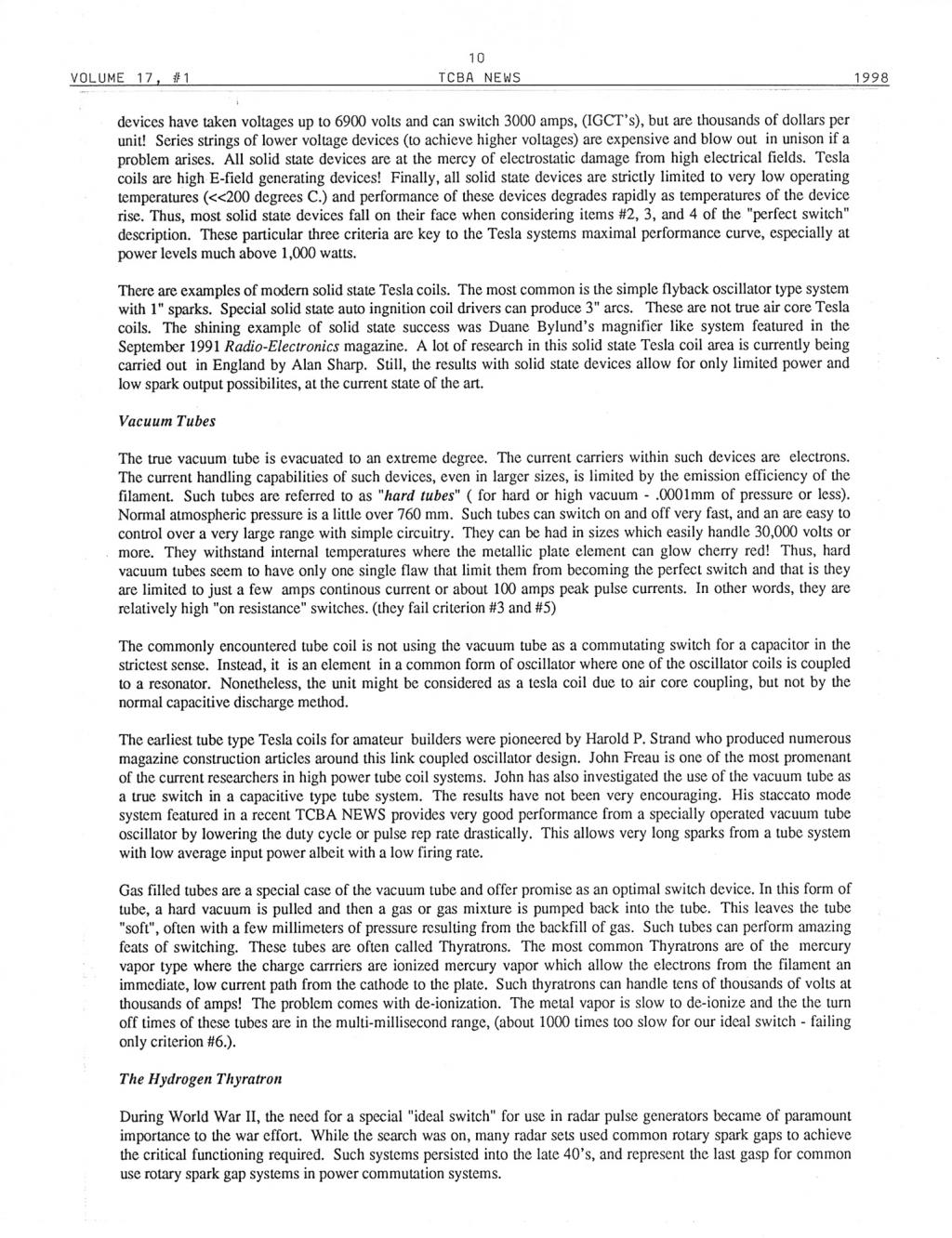