The answer came from the MIT Radiation Laboratory in the form of the Hydrogen Thyratron. The specifications for these very special tubes reads like our idealized list for the perfect switch. Modern H2 Thyratrons can easily handle 80,000 volts, have peak currents in the 10,000 amp range, be turned both on and off in well under 1 microsecond, (nanoseconds), operate at high temperatures without significant degradation, and be silent in their operation while switching 1000 times per second. The tube and its workings were actually classified information until just after WW-II!

Why don't we use these things?!!

There are two reasons we are not using these near ideal switches. First, they are like an SCR in that once turned on, they stay on as long as there is a forward bias on the device. Luckily, in the tesla oscillator the current reversal in the primary circuit will turn the tube off if it is dynamically isolated from the power supply (choke and ballast resistor). Unfortunately, the primary can't ring following the reversal as the switch is now open. For magnifier use this is a possible plus, but for normal coil use this can limit the efficiency of the system. Currently under investigation by the TCBOR, is the use of “back-to-back”, pulsed grid controlled, H2 thyratrons. This is being done to investigate optimal quench in real systems under varying conditions. This is a complicated electronic arrangement, but should allow for some very good opportunities in controlled Tesla coil operation. A tesla coil using this arrangement should be able to be fine-tuned to quench at a specific primary circuit zero crossing event.

Finally, there is the issue of expense. The hydrogen thyratron is one of the few vacuum type tubes still in regular production in this country. It is of such a special nature and of such complicated construction that the number sold is limited. The new cost for smaller H2 thyratrons is in the hundreds of dollars per device. Big versions cost thousands. Fortunately, there are plenty of new and used units available from surplus dealers and from hamfests. I note that the 5C22-JAN, H2 thyratron (most popular tube number) is available, brand new and factory fresh, from Newark Electronics for $981.75. A call to my good friend Don Orie at O.E. Technologies yielded brand new, in box, but surplus government 5C22-JAN tubes for $70.00 each (I bought the two he had). There are similar “NOS” (new old stock) buys to be found at other surplus dealers and vacuum tube sellers. The hamfest is the #1 source for every “techno” item on earth!! A month ago I purchased two 5C22 tubes at a hamfest in Virginia which were dirty and the bases were slightly corroded for $1.00 each! I jokingly asked the seller if they were any good. He said he didn't even know what they were other than just tubes!!!! I got them home and the filaments on both checked good. A little steel wool applied to the bases brought them to a shiney new appearance. I tested them in circuit and they worked fine. They were probably “timed pulls” from an old radar, but still 100% functional. I actually have many H2 Thyratrons including the 3C45, 4C35 and 5C22 all the way up to larger types. Over 90% were priced under $10.00 each at a hamfest. They can be incredibly cheap or outrageously expensive depending on the coiler's degree of sloth or vigor. Price need not stop the curious coiler provided he or she is adventurous and resourceful.

The typical specifications for the ubiquitous 5C22-JAN are:

The enclosed circuit diagram has been used to power both common two coil systems and small magnifier type coils. Many of the parts specified can be purchased at a local Radio Shack or from Digikey. Other parts, the Thyratron, filament transformer, HV choke, and 100 watt resistor might best be found surplus or at a hamfest. It is assumed that the amateur attempting this project is familiar with circuit diagrams and construction of both solid state and vacuum tube systems. The pulse transformer is easily hand wound on a common one inch ferrite toroid with #28 or #30 Kynar insulated “wire wrap” wire. 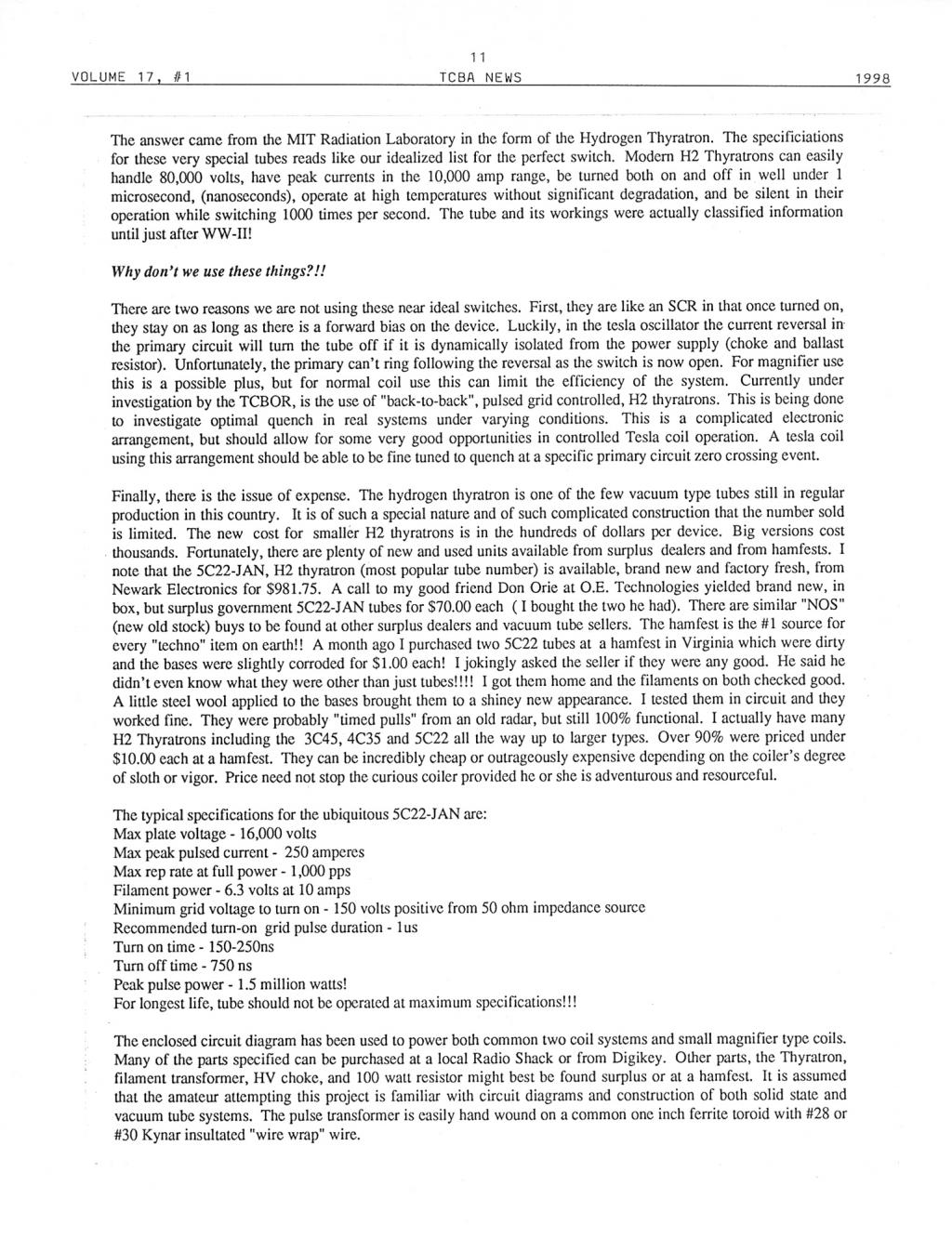