A Point of View

Back in the Fall of 1948, the Moody Institute of Science2 demonstrated their “stage coil” here in Fresno. The top of their coil was capped with a flat round metal plate; this drew my attention because I was familiar with the use of small top electrodes according to tradition.

Their stage coil was located at the center of a 60 foot stage at the Fresno Memorial Auditorium. Stage curtains were drawn full open. A closed metal control cabinet was rolled adjacent to the left side curtain, and positioned for easy control access and audience viewing. This cabinet contained the power transformer, variable frequency R.F. Transmitter, and other devices. Varying the frequency (lower) permitted standing on top of the stage coil to output sparks from finger tips capped with metal. This worked quite well on the tip of the tail of my pet white rat, until the tail dropped below critical elevation; but then, it was only a small Hartley Tube Sparker. The rat declined further involvement.

Two flexible cables were extended from the cabinet base to the primary winding located at the base of the stage coil; cables were kept separated and at least 65 feet of cable was required to serve the loop run. The cost for the convenience of a distributed system of this type can become objectionable under certain circumstances via the limiting reactance of the coupling discontinuity.

A vertically positioned stationary (multiple spark-gap assembly) was brought forward from the upper right face side of the control cabinet. Flat rectangular metal plates extended the metalwork of the sparking areas for simple convection cooling. Gap space adjustment was made directly accessible.

The stage coil produced a uniquely eruptive & percussive report that dominated the hard snap of the spark gap noise; I later characterized this unusual audio / visual performance: Moody caused the release of energy once upon each renewing power component (120 per sec at 60 Hz); these damped-wave energy bursts were operating at a level just beyond the critical hold-off threshold produced by the flat output electrode. Then by reason of this, and the 120 Hz repetition rate, the visual component was made to appear that several individual sparks were sourced simultaneously from dispersed points across the flat electrode surface - without excessive edge dominance.

Tight saw-tooth branching and a hot fire / violet color appeared with each spark as the apparent spark group fanned apart and extended into free space to about four feet. Closer observation revealed that the various sourcing points were shifting at a sub-multiple of the spark repetition rate. This produced image jump (flicker) by falling into this range of human perception. These darting, dancing components added the finishing touch of innovative brilliance to the design of this machine. Moody represented their stage sparker under the name “Tesla Coil”; and this Tesla Coil is most certainly untraditional! Involvement with this type of Tesla Coil is worth much more than can be realized until it's tried! The untraditional rotorless Tesla Coil driver also makes an excellent lab tool - however wasteful of the 60 Hz power consumed by the bypass capacitor.

A few years later, I read J.J. O'Niell's3 compelling story about Tesla's grand experiment at Colorado Springs: J. J. O'Niell's statements of “ghostly blue masses of fiery hair”, big individual sparks, and the remote warming event that toasted the dynamo at the power station catalyzed me into permanent Tesla addiction. Also, back in the 50s I experienced the biggest glut of inexpensive toys ever (W.W.II fallout). How well I remember polishing those beautiful 304TLs / THs, 833As, etc. Then came the giant Hartley Oscillator constructions for Tesla coils. Also, enter the famous “California Kilowatt” ham transmitter: There were, 872As, pole transformers, high energy H.V. capacitors everywhere; these were also the best of times for the tube Tesla coil buff.

But something was very wrong here; I was going absolutely nowhere with spark gap Tesla coils. So I took a trip to Griffith Park, Los Angeles4; and there in its small display niche was this thing of hand-crafted beauty; but its performance never approached my idea of real possibility. A team of wild horses and 50 feet of screaming (rotary-break style) lighting might have caught my attention. But I simply saw this performance as just another screaming asynchronous Frankenstein sparker from the B&W sci-fi flicks. 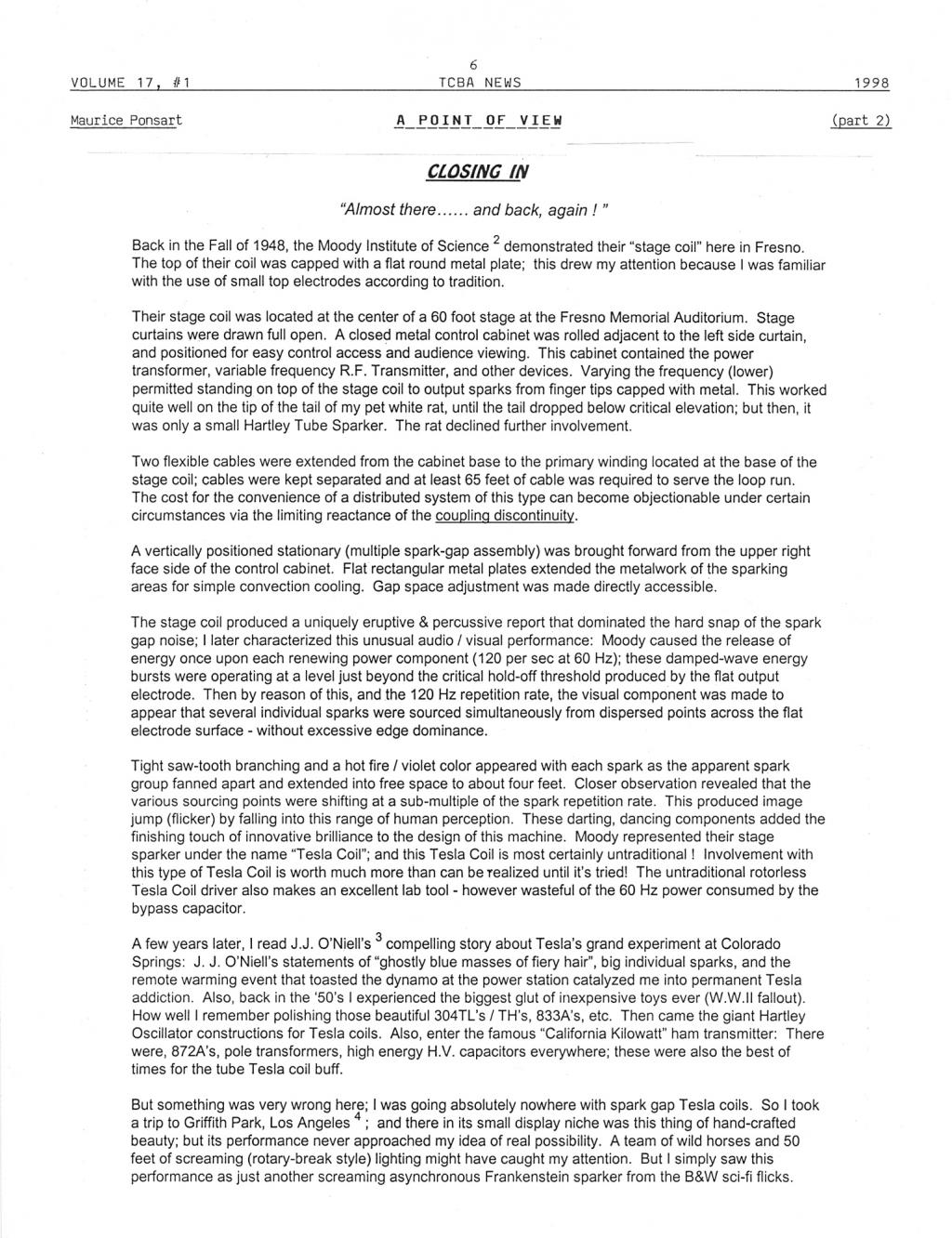