Too bad that Moody didn't construct the Griffith Park Tesla coil; but with this demonstration I did learn about quenching, power arc, the rotary-break, and the endless need for Band-Aids.

But wait!! It seemed Moody required none of this traditional rotary stuff; even by today's standards the Moody Tesla coil is unique. So is J. J. O'Niell's story:

O'Neill interpreted the final rate of Tesla's experiment in terms of spark-rate noise (“sound like the rattle of a machine gun”). So I estimated the great dynamo melt-down incident to have located between 18 and 37 sparks/second. Why a dynamo? Tesla could conveniently blame its failure on that “dad blasted Edison technology”; DC would provide easy motor speed control; and a balanced railroad car wheel in the shaft between motor and alternator would also do quite nicely.

Now I was well aware of the message within the term (constant volt seconds) due to my experience with transformers and gas powered motor/generators. So, I connected Moody & O'Neill by realizing that a small O'Neill story would follow by powering Moody from a motor/generator set. I fully realized that some yet unknown form of very effective control over the dreaded power-arc must be involved here.

And so it was - a commercial break on AM radio. These were great times; and unlike the gradual and certain brain death resulting from T.V., productivity flourished in the presence of crackly AM radio. Remember those great old reusable firecrackers of the 1 μF non-polar high voltage type? Remember the outstanding percussive report when shorted by a metal rod following charge? I can remember dad pleading; “when will you ever learn to use my tools for the intended purpose?”. You see, his best long screw drivers were used to discharge these firecrackers; and this formed a two part splat-weld that guaranteed a permanent departure from the intended purpose.

So, my discharge tools vanished. Then it really came down hard when dad caught me shacked up with a pole transformer. He'd never seen one of these beauties in a bedroom before. A dispute over danger ensued, forcing me to take the pants off of the ham transmitter. Dad wanted assurance that nothing resembling a pole transformer was located therein; and so it was..... (not): a naked pole transformer, some 872As, and a bundle of firecrackers were nestling comfortably. Believe me, this was truly the bottom-end-minimum hardware requirement for membership in the “California Kilowatt” club. This established a very conservative value of 10kv DC shunted by 10 μF; and we had a solid amp to play with: The Allis-Chalmers type CBS (7200/12470Y - 120/240) sets an acceptable power transformer standard for a California-style ham radio power supply. They're provided with a multi-position switch (% high voltage selector switch starting at 90%). These puppies are small, easily handled, and serve well in series (under oil) or in parallel. Then with flying filament transformers (off-the-ground, HI Pot tested to 100KV, BIL) I was set. Dad eventually caught an approving glow from the blue light of the 872As; but my bed partner and his screw drivers had to go. Sound familiar? By the way, back-to-back pole pigs make great modulation transformers, (10KW easy audio). I modulated the quad 304TL sparker operating continuous wave at 10KW using rock music.

Well, what can I say? I dressed out a pair of H.V. leads from the power supply of the ham transmitter, thereby forming a parallel line inductance. The source end became an R.F. short circuit in shunt with a voltage source. Variac control set the maximum limit of 10 KV DC. Then without my favorite long screwdriver & special handle, I was forced to commutate my firecracker across the open ends of this inductance. Upon first charge, everything was familiar; upon first commutation, a remote neon tube flashed, a light bulb exploded, and my ears continued to ring for days. Then, upon first analysis, I began to think that the text books were lying: E ≠ CV2c /2. After some time, I finally got the big message: E = C (∆ Vc)2/2; my ∆Vc term had become double the supply rail value being used. But wait, there's more ! 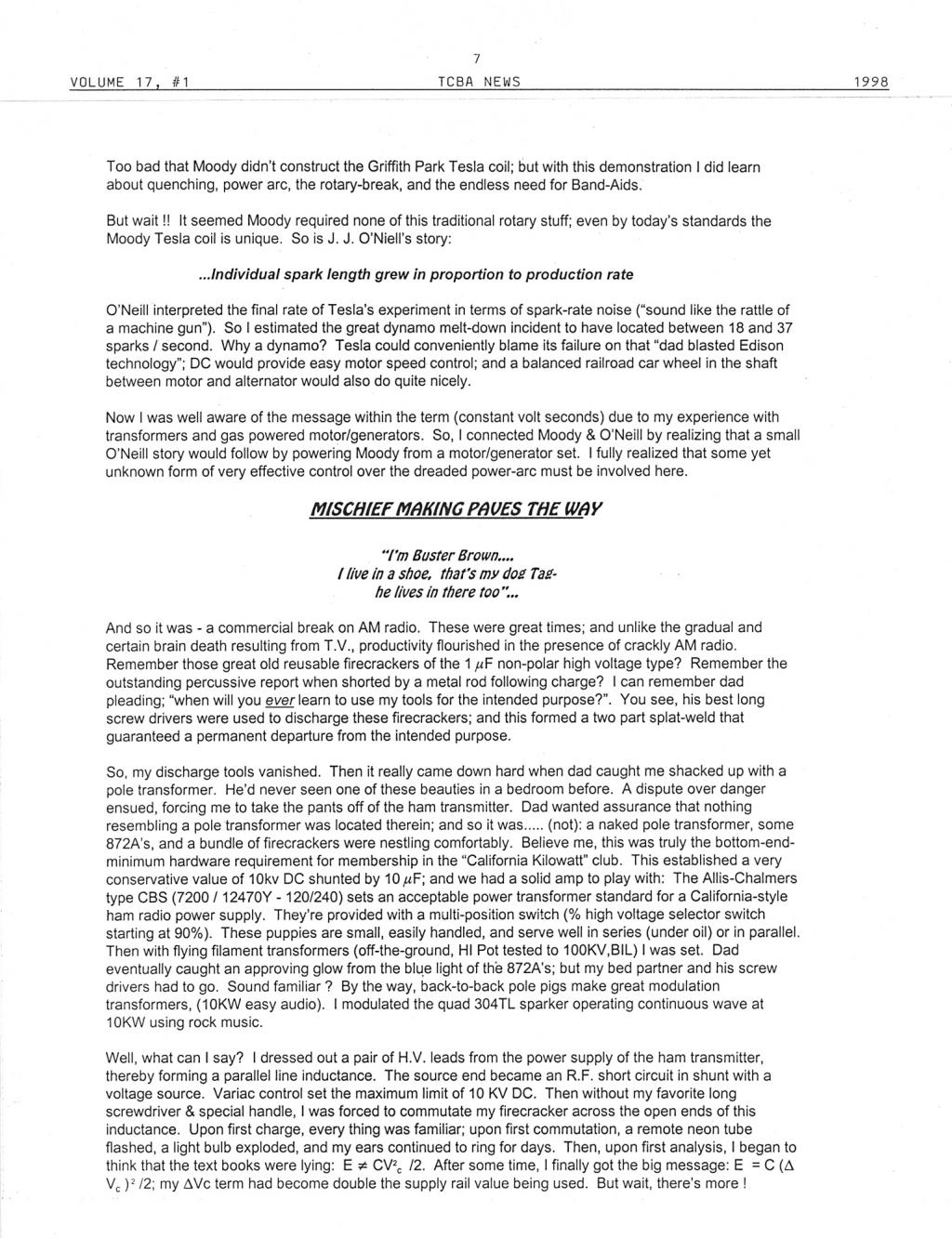