Free Energy - The Race to Zero Point, a video which discusses new energy technologies. “What if you never had to pay another electric bill?” is a question posed in the advertisement appearing in The Video Collection catalog. “Almost a century ago, Nikola Tesla developed a method to 'broadcast' free energy.” This 2-hour video (and numerous others) is available as E7901 FREE ENERGY for $29.95. For more information, write to the Wellspring Media, P.O. Box 2284, South Burlington, VT 05407-2284. Also available from the same source is E8170 NIKOLA TESLA (The Genius Who Lit the World) for $34.95. “Meet a bigger brain than Edison” says the advertisement.

Those who work and play with lethal voltages whether in regard to highly charged capacitors, transformers, or other high voltage components often become used to handling such devices that the procedures become routine - too routine, in fact. There is always the danger of careless handling of such circuits. Of course, the consequences can be life threatening. Dave Sharpe reminds us of these dangers by offering a nicely printed list of precautions. The information is printed on a stiff plastic sheet which will withstand abuse and soiling. Dave's product can be ordered in several sizes and every lab should have one posted in an appropriate area. To learn more about these valuable tips, write to Dave at 6500 Glebe Point Road, Chesterfield, VA 23838. Those inquiring should include an SASE.

‘The Philadelphia Experiment - Dangers of Traveling Through Time and Space’

“Here's the story of how the military is alleged to have experimented with Nicola (sic) Tesla's and Albert Einstein's theory on invisibility and time travel during World War II” so says The Science Fiction & Fantasy Collection catalog. The Philadelphia Experiment video (#10767) comes in 2 volumes at $40.95 + $6.95 shipping and handling. For information on this and numerous other videos in this genre, write Fusion International, 17311 Fusion Way, Country Club Hills, IL 60478. You can also order the above at 1-800-959-0061.

Although the electronic device known as a Theremin has been used in motion pictures and recordings, it never became as popular as the commonly used orchestral instruments. However, neither did it lose its appeal among those who were bitten by its scientific characteristics and weird sounds. There is now a Web-only Theremin Enthusiasts Club International based in Canada and located at www.he.net/-enternet/teci/teci.html. Theremins are also available in kit form and as well as in finished professional models from a firm known as the Big Briar Company (address not available at this writing) in Asheville, NC (tip from Bob Wroblewski) [see reference to a Theremin video on page 1 of Volume 16, #1.] 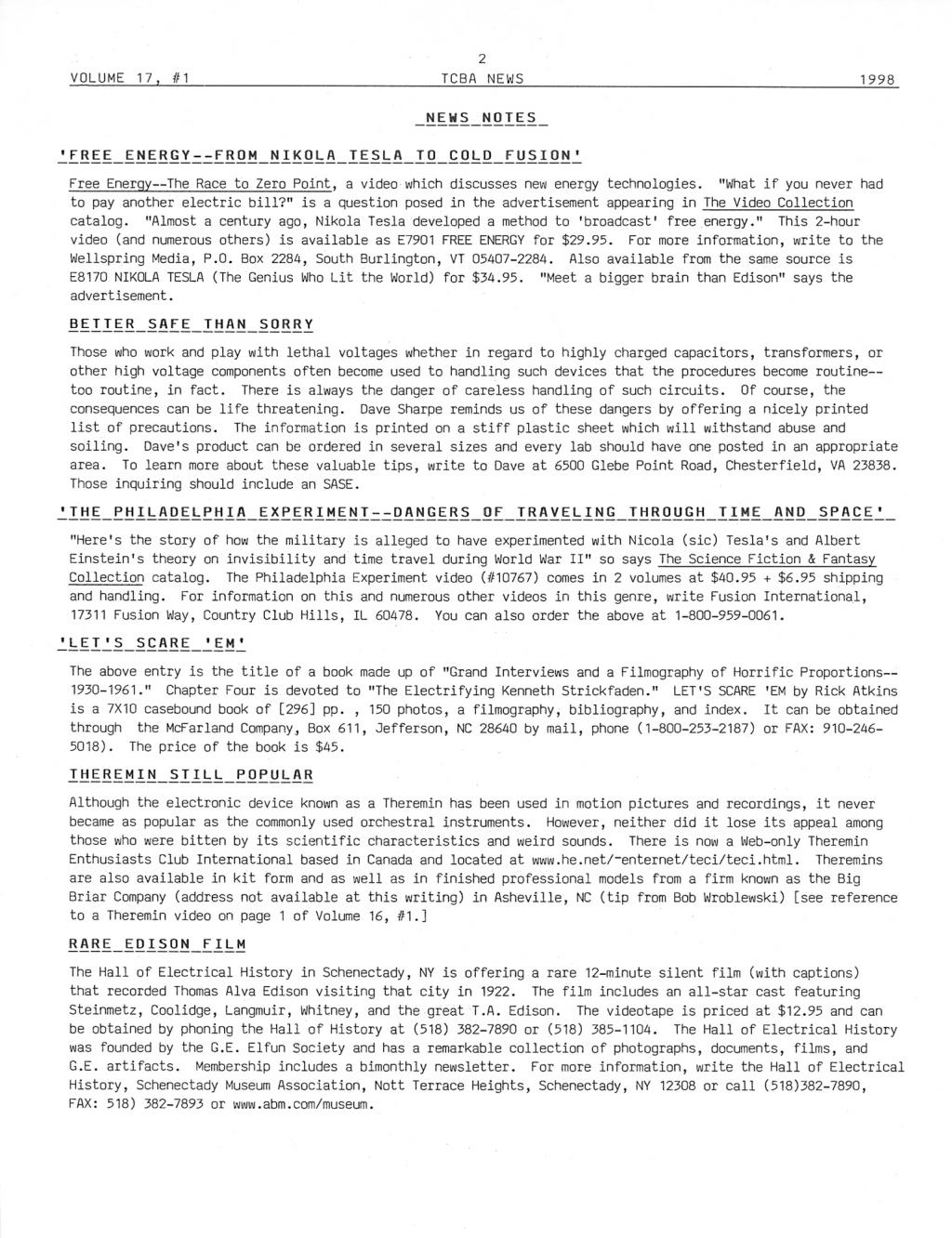