‘Scientists Who Were Shafted’

The May 1997 issue of R & D Magazine included the second part of a series on “scientists who, for one reason or another, never enjoyed the recognition they deserved for breakthrough discoveries.” Among those mentioned were Richard Ogg (properties of super conductors); Russel Seitz (diamond based laser); Oswald Avery (DNA); and Nikola Tesla (Edison reneged on a $50,000 promise, Westinghouse reaped fortune and fame on Tesla's polyphase patents, and Tesla not receiving the Nobel Prize, even though it had been publicly announced that he would be a recipient). The article was written by Fred Jueneman. His past articles may be read on the R & D Web site (see Feature Stories at www.rdmag.com). (tip from Robert Panichi)

A good part of a day was spent at the local Barnes & Noble book store. Ruth (my second set of eyes), came up with the following: (1) Tesla was briefly mentioned in INSIGHTS OF GENIUS regarding his ability to visualize inside of inventions such as motors, etc., to check their working condition. (2) The ENCYCLOPEDIA OF THE HISTORY OF TECHNOLOGY credits Tesla for his work with A.C. such as nonsynchronous and synchronous motors, the fan, and so on. (3) The ILLUSTRATED ALMANAC OF SCIENCE AND TECHNOLOGY (under the July 9 section) credits Nikola Tesla for making alternating current practical, “the son of a clergyman and a mother who invented gadgets for the kitchen.” (4) Tesla was given one sentence under the chapter on radar in The GREAT MODERN INVENTIONS. “It was in 1900 that the Croat Nikola Tesla was the first to describe the possibility of locating a moving object using radio wave echoes.” However, Tesla was not mentioned in (5) The GREAT SCIENTISTS. (tips from Ruth Goldman)

‘Tessler Did (Said) That’

It's been tough enough getting an ingrate world to recognize the scientific contributions by Nikola Tesla; but now there appears another problem whereby people are crediting Tesla for things he may not have done or said. Some statements that have appeared in print, on radio and/or television claiming that Tesla did or said something are not substantiated in any of the major Tesla biographies. For example, while listening to an Art Bell talk show program, a physicist was talking about black holes, gravity wave cancellation, and invisibility. Host Art Bell referred to the Philadelphia Experiment. That's the World War II incident in which the Navy is alleged to have made a ship invisible by energizing a huge magnetic field around the vessel. A person who was in on the conversation via the telephone claimed that Tesla did that. The physicist agreed that “Tessler did that.” And on another Art Bell program, a discussion of the Philadelphia Experiment brought in a comment by a witness to the event. He said that the experience was very uncomfortable. A caller on the telephone agreed and added that “Tesla said it would be uncomfortable.” I wonder....?

Jerome H. Lemelson, a prolific inventor who held about 500 patents, has died. He used wealth obtained from his bar code scanner invention to encourage young inventors and gave generously to educational institutions such as MIT and the Smithsonian. Lemelson held the opinion that “Every new American inventor is a potential new American business.” If additional pending-patent applications are approved, Lemelson could become the American to hold the most patents since Thomas Edison. Lemelson invented high-tech mechanisms that were used in automated warehouses, industrial robots, cordless telephones, fax machines, VCRs, camcorders, and the magnetic tape drive used in Sony's “Walkman” tape recorders. He also invented some medical instruments including the talking thermometer for the blind.

‘The Kid Who Invented Television’

When Philo T. Farnsworth was 14 years of age, he showed his high school chemistry teacher a diagram of an electric circuit. That diagram was to play an important part in a court case many years later when the RCA conglomerate tried to discredit Farnsworth's television patents. The testimony of Farnsworth's teacher convinced the courts that the circuit sketch by a 14 year old boy did, indeed, demonstrate the reality of electronic television. Farnsworth did not stop with television but contributed to the development of radar, the electron microscope, rocket guidance systems, incubators for newborn infants, and so on. Although Farnsworth was bitter over the difficult struggle he encountered in establishing his rightful place in the history of the invention of television, he later concluded that it was all worthwhile. Philo T. Farnsworth's story appeared in the November issue of BIOGRAPHY magazine and was written by Matthew M. Fenton. 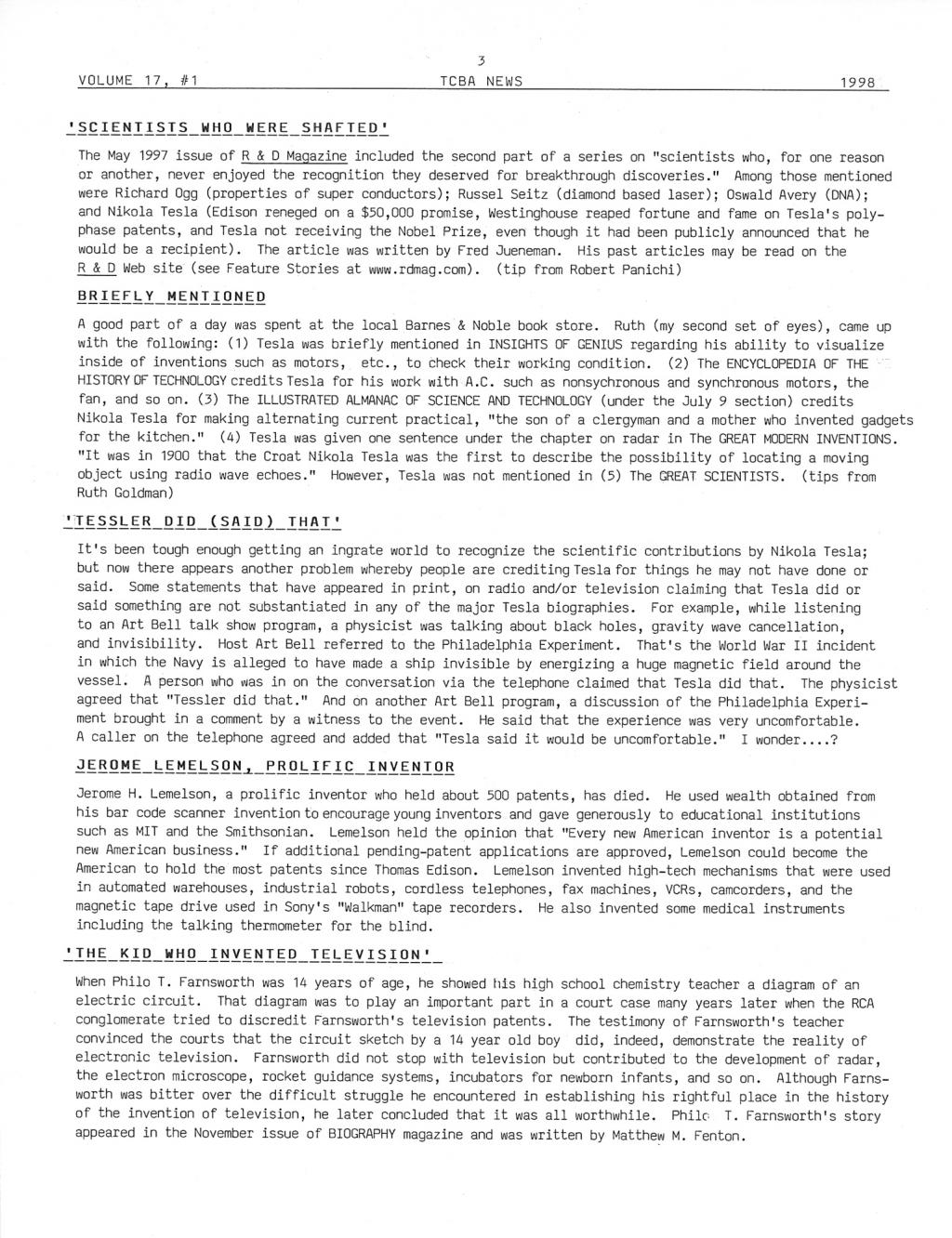