Some of the Plans of Science to Communicate with Mars...(1)

The magician speaks into a tube, asking of his minions below if all is ready...Below, the hum and buzz of the machinery has become a deep, muffled roar...The pale magician's eyes blaze, but his hand is steady as he holds the button, and he never blinks as he watches the green and violet lightning fly from the wires above him and follows it skyward...Who is this magician, and what is the portent of the magic that he is making? It is Nikola Tesla, calling up Mars on the interplanetary telephone. With the touch of his finger he is turning loose into space the most tremendous electric spark that ever shook the elements. The whole terrific force of Niagara is concentrated into this one titanic shock.

Ever since it was first suggested that perhaps Mars might be inhabited, men have been fascinated by the desire to make the acquaintance of these possible celestial neighbors...In order to communicate with these intellectual neighbors of ours, it is necessary in the first place, to select some medium that will be common to both of us...The development of wireless telegraphy and the invention by Tesla of the method by which power can be transmitted to a great distance, there to be magnified and utilized, seem, together, to furnish a basis for the most rational theory as to the possibility of sending a message from the earth to Mars.

The exponent of this theory is, as might be expected, Nikola Tesla. Practical electrician, as he is, he has the imagination of a poet...So Tesla, both poet and scientist, may see better than those who have their noses on their implements. Tesla, long ago, saw power from Niagara Falls operating the trolley cars and factories of Rochester, Buffalo, and other cities hundreds of miles from the falls. Today, his apparatus is actually doing this. Now he has conceived a larger and more powerful apparatus, collecting all the vast force that goes to waste over the ledge across the Niagara River, turning it into tremendous waves of electrical energy, and hurling it forth into the air in wireless waves that shall reach not only Mars, but away to the confines of the solar system, and cause shocks upon the surface of Neptune.

Tesla has for several years been devising and testing machines for this very purpose. He says he is almost ready to transmit ten thousand horsepower, drawn from Niagara, without wires, to any part of the world or to any of the planets, distance being no object to him...Mr. Tesla says that once communication has been established, the rest will be easy; the Martians will be found to be so intelligent that they will have no difficulty in learning our code and language, and then teaching us their own - if they have one...Someday, then, when telescopes are more powerful and cameras more perfect, a photograph will be obtained that will reproduce the details of the Martian landscape so faithfully that examination of this picture...will reveal to the astonished seeker the habitations of the Martians, perhaps even those beings themselves. Then we'll know what's there. (1) Excerpted from The Live Wire for February 1908. (tip from J. Curtin)

Can We Signal Mars by Short Wave?

Nikola Tesla, one of the greatest electrical and radio inventors of all time, recently made the statement that he believed that he had heard signals from a distant planet, nearly forty years ago. 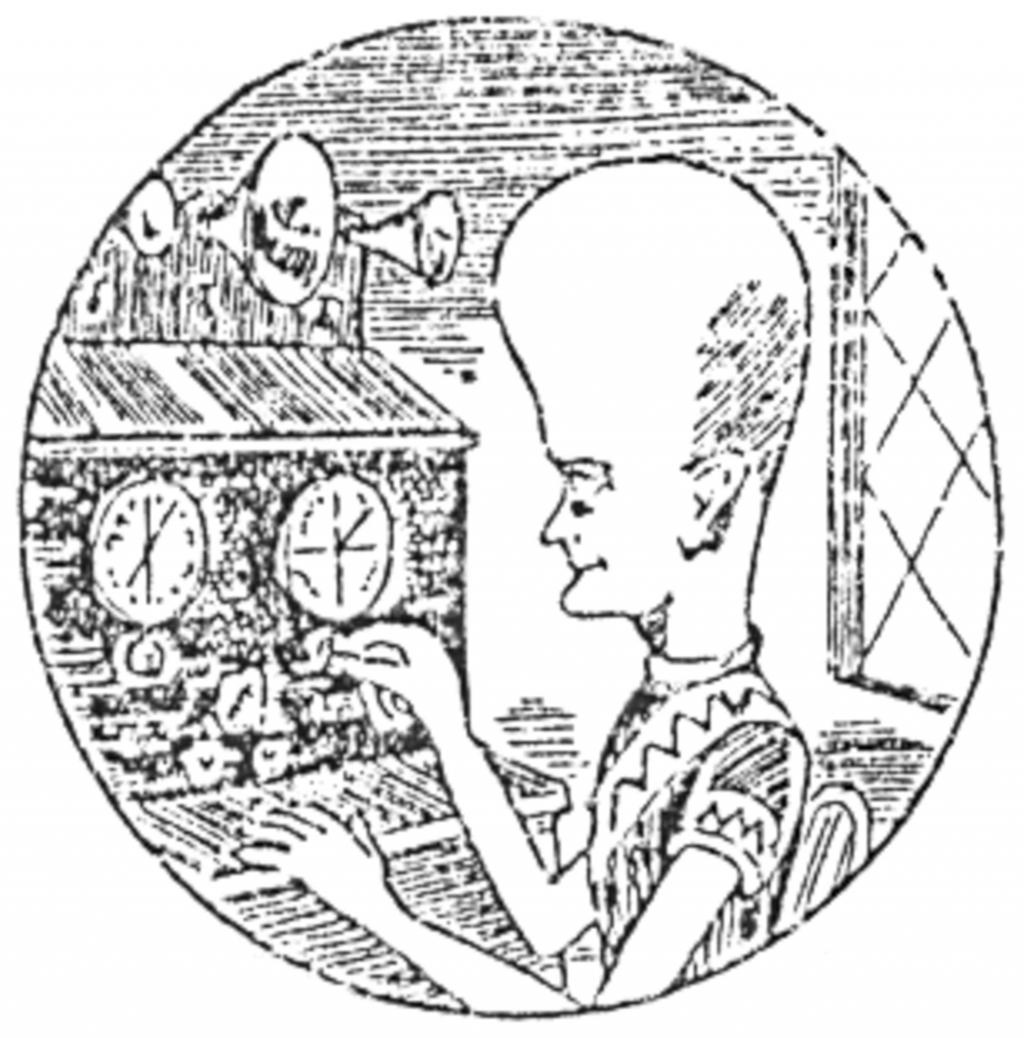 In about the year 1899, he was making a series of careful listening tests on short waves, when he heard a series of signals which had a peculiar measured cadence, and which were repeated many times. Dr. Tesla's interpretation of these signals was that they spelled out “1-2-3-4,” etc. It is his opinion that if these signals had been sent by Martians, they had used numbers in an attempt to establish communication with earth, for the good reason that numbers constitute a very broad universal language.

Dr. Tesla was one of the earliest investigators of short wave phenomena, and, about fifty years ago - even before the year 1890 - he was producing short waves in his electrical demonstrations by means of his high-frequency Tesla coil. Without a shade of doubt a great part of the credit of early establishment of radio should go to Dr. Tesla. His early patents and scientific papers establish a record of the remarkable work he did long before the dawn of the century. His opinion on the possibility of communicating with Mars is, therefore, of more than usual interest. 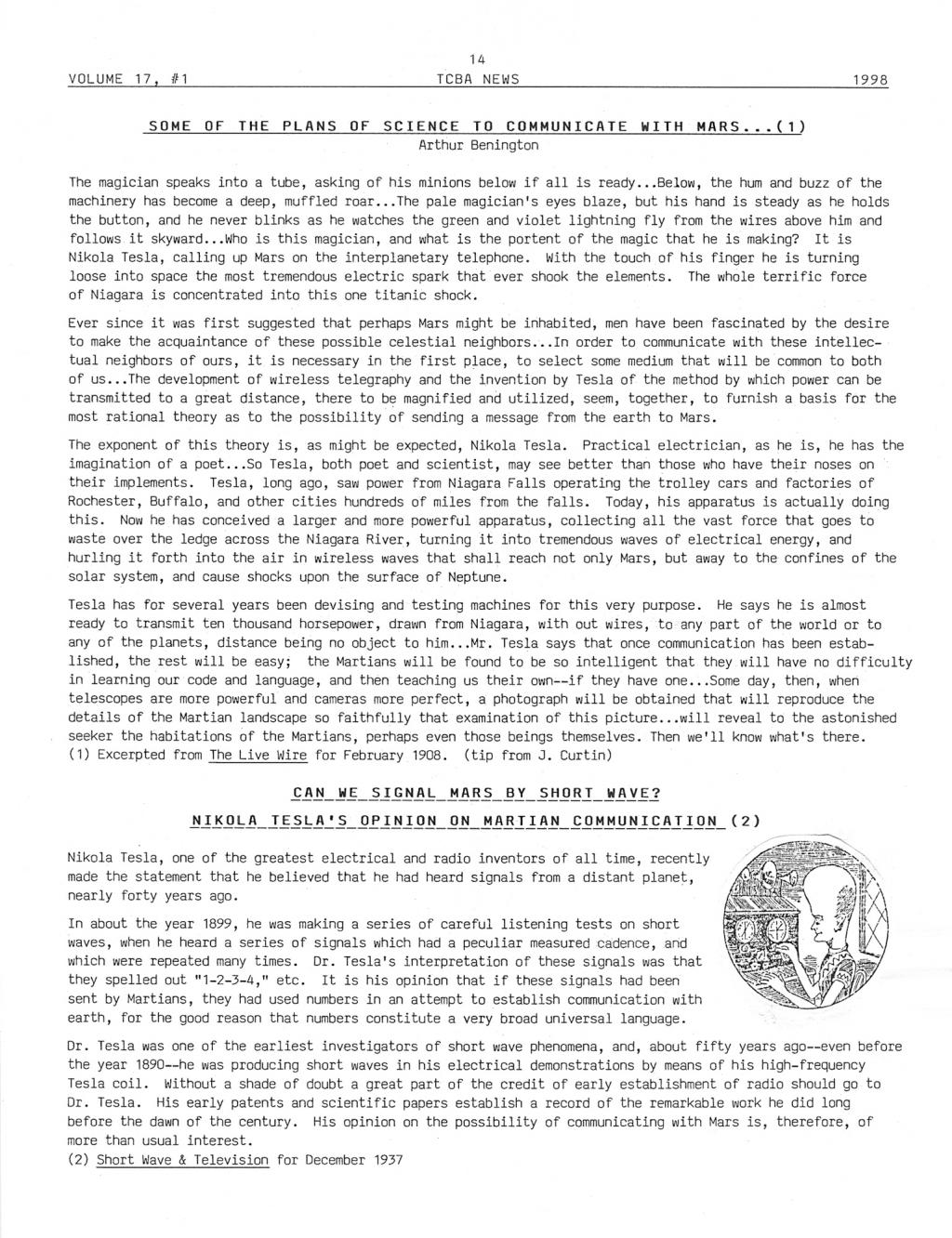