I have a feeling that some members will read this issue with either raised eyebrows or wrinkled forehead (or both). The response might even bring some caustic letters. Worse yet, there may come in the mail a TCBA NEWS returned in shredded form. Why do I feel this way? Because, I get letters. And when the topic is Thomas A. Edison, there are often undertones of bitterness.

I can think of a number of reasons for such negative emotions. Some dislike Edison because they blame him for Tesla's demise. Others knock Edison for taking credit for inventions not entirely his. Although there may be some justification to their complaints, I do not agree with the whimperers who blame Edison for Tesla's dilemma.

That Tesla's name has disappeared from science texts is due not to Edison but to a combination of factors. Among those who turned their backs to Tesla were [1] The electrical industry (how ironic it is that a number of electrical utilities are named after Edison while not one honors the inventor of the AC system they use), [2]the professional electrical fraternities (IEEE), [3]and many of his peers, colleagues, and associates. There is a fourth factor - his formidable opponent -himself. Don't blame Edison.

My growing-up years occurred when Edison, Steinmetz, and other notable inventors filled the pages of our history and science textbooks. I had learned about Edison from the time I first was able to read a biography. This exposure to the great inventor continued right on up through my high school years.

Edison's name has been kept alive through several generations of writers, many of whom were supported or influenced by such institutions as the General Electric Co., the Edison museums, the electrical power utilities, the IEEE, motion pictures, the radio and phonograph industries, and the other enterprises which he touched upon.

Not only has Edison's name commanded space in our texts but also in the thousands of pages of newspaper and magazine articles as well as the numerous biographies written in his behalf. Edison's face has appeared in just about every applicable publication ranging from boy scout readers to musical periodicals. If all of the Edison memorabilia was stored in one building, it would require a volume equal to that of our tallest skyscraper.

There are those who carry the opinion that Tesla hated Edison. The two giants may have had a falling out but Edison's fight was with Westinghouse, not Tesla. Edison not only lost that war but also his reign as king of electrical power.

What about Edison cheating Tesla out of a $50,000 bonus? There are several versions of that alledged incident. It may have been a manager, not Edison, who made the promise. Another version attributes the rift to Charles A. Batchelor, an Edison foreman who denied Tesla's request for a modest increase in salary. Take your pick.

The truth of the matter is that Tesla held an admiration for Edison's ability to have accomplished so much without the benefit of a formal education. However, he considered Edison's trial and error methods wasteful.

If he had a needle to find in a haystack, he would not stop to reason where it was most likely to be, but would proceed at once with the feverish diligence of the bee to examine straw after straw until he found the object of his search. . . . His method was inefficient in the extreme, for an immense ground had to be covered to get anything at all unless blind chance intervened, and at first I was almost a sorry witness of his doings, knowing that just a little theory and calculation would have saved him 90 per cent of his labor. But he has a veritable contempt for book-learning and mathematical knowledge, trusting himself entirely to his inventor's instinct and practical American sense.

OK, so Edison may not have been the true creator of some inventions attributed to him. And, he may not have possessed the moral fiber required of an Olympian. What kind of a man would electrocute innocent animals? How, then, did he come out smelling like a rose?

For one, while Tesla followed the principles of a true scientist (discovery above all), Edison was driven by an economic conscience. He played a prominent role in both the financial and political scenarios concerning his inventions.

Edison was more than “just an inventor.” He was an inventor entrepreneur. The genial experimenter followed an idea from its concept on through to its manufacture and, finally, its distribution to market. His method was probably the first use of R&D in defining a problem.

Another Edison strength was a preference to invent systems instead of components. He then became the sole supplier of an invention. This assured him of cornering the market. Consequently, no competitor was able to hold a gun to Edison's head.

Edison's trump card was an ability to attract highly educated associates. Some of the brilliant figures employed under Edison were Nikola Tesla, Francis Upton, John Kreusi, Charles Batchelor, Francis Jehl, Reginald Fessenden, W.K.L. Dickson, Frank J. Sprague, Jr., and Arthur E. Kennelly. Many, however, left Edison when it became apparent that he was “picking their brains.”

It just may be that Thomas Alva Edison was everything good and bad that we say about him. Nevertheless, the wheels that were put into motion portraying him as an American legend of Olympian proportions continue to turn. 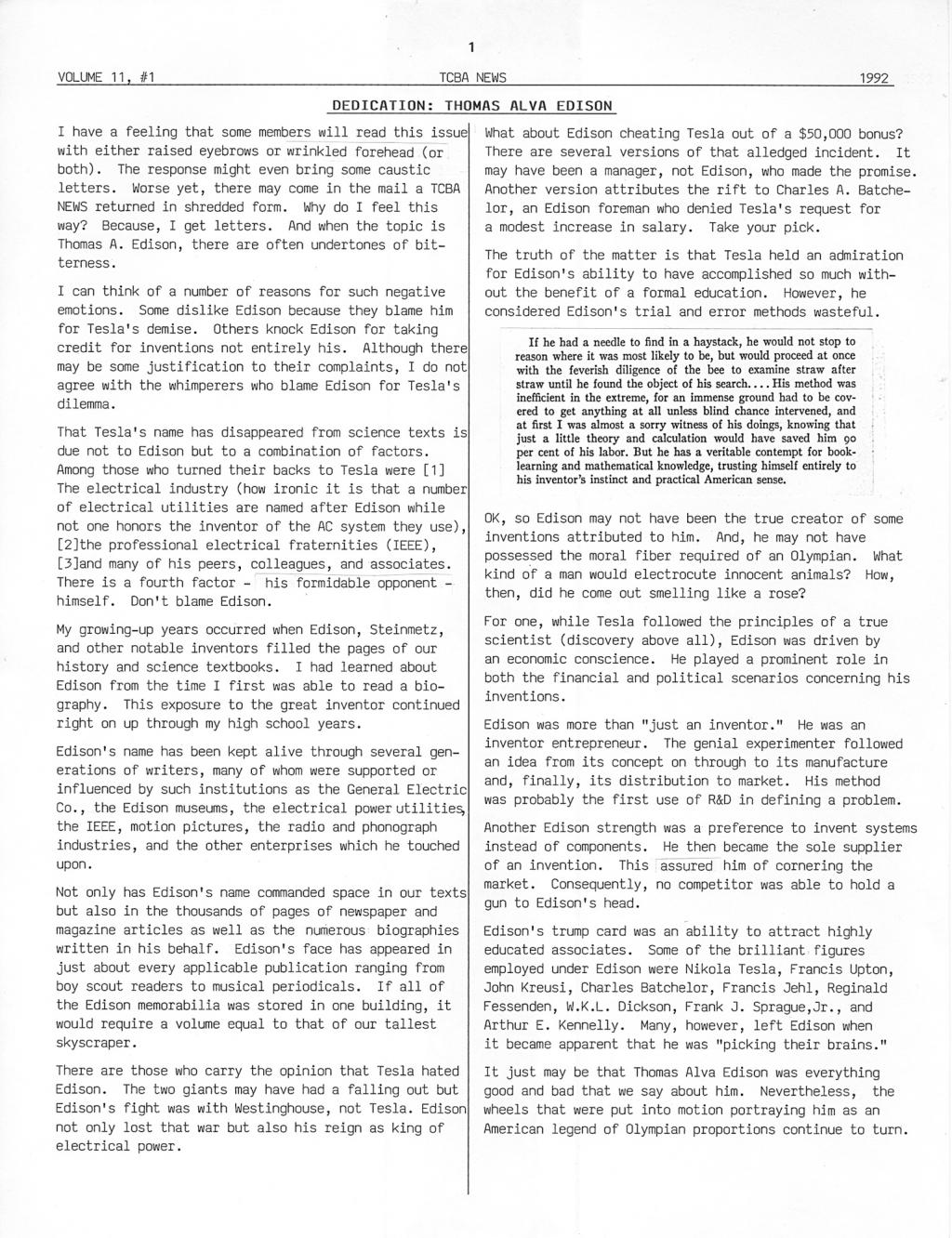