Defining a Magnifier - What's in a Word Anyway?

Since we were undertaking to build one of these systems, we had to have a base upon which to build and so we were forced to create our own working definition of what a magnifier was. A magnifier for us is: Any primary/secondary system operating at a frequency (f) whose secondary top terminal base-feeds a separate and non-inductively coupled third coil whose 1/4 wave resonant frequency is also (f) and gives a definite voltage and/or current rise over the same third coil operated in a conventional Tesla circuit. This definition gave us a considerable latitude in the primary/secondary circuit, since some of what we had read and heard indicated that a 1/2 wave secondary would be needed. Primary/secondary coupling was also left hanging since most sources said coupling needed to be tight but we wanted to test a range of couplings as part of our experimental tests. Finally we pondered whether magnification above that of a simple 1/4 wave Tesla coil could mean power transfer, current in the arc, or voltage gain or all the above. Could a magnifier be built to favor one of these at the expense of others? As usual, once you think you've pinned something down, more questions pop up. This, however, meant that there were many avenues of experimentation open and therefore more fun to be had.

Search for Literature and Information Begins:

We have run across an array of people who seemed to be “armchair theorists” and told us just what we needed to do to get a magnifier up and running. We also read many articles written by well intentioned people who, of course, had not gotten around to building one yet. In our short 7 month experience in magnifier assembly and testing, none of what we read helped much at all. In addition, two seemingly critical points which we had to discover on our own and would have been patently obvious to any one who ever built a magnifier were not found in any of the literature nor were we told these little “secrets” by any one of the self-styled gurus.

The prime source of data was of course Tesla's own “Colorado Springs Notes”. This book proved to be of mixed value as it was to lead us down a couple of blind alleys. Tesla, it seems, tried ideas in June that he raved about. Then, in a trivial note in July altered his setup only to abandon it completely in September and give only loose descriptions thereafter. We found it best to read the entire “Notes” first then go back and make our own notes from his notes. Bill Wysock in his TCBA article Lightning in Colorado (vol 2,#3) mentions Tesla's exhausting some trivial subject beyond all practical limits and giving only sketchy details on items of pivotal importance. We also observed that just as Tesla would start to investigate a promising avenue that would captivate the reader, he ends the daily notation with; “this to be investigated further”. A rapid scan forward in the “Notes” finds that it is never mentioned again! Much was learned however, after many re-readings of the “Notes”.

In the Beginning - There was “Free Resonance”

Our first work involved what we came to call “free resonance”. We had noted in our earlier Tesla researches that local grounds are “powered up” or made active in the vicinity of a working Tesla coil. This effect seemed to increase when large toroidial top capacitances were used. We found that a free 1/4 wave coil, if base excited by an active ground and small radiated fields at its resonant frequency, could produce respectable sparks! In the diagram #1 we show the basic set up to demonstrate free resonance. The key to assembling a free resonance system is to assemble a regular Tesla coil then place a large enough toroid or top capacitance on top of the secondary so that no spark breaks out of it when it is running and properly tuned. Find out what the secondary's new operating frequency is by characterization (see references)and wind a third coil (the free resonant coil) for the same 1/4 wavelength frequency. This new coil is connected to a “local ground”, often the same ground as the Tesla coil and is then placed about 3 feet away from the operating Tesla coil. Experiments showed that both the local ground and radiated field are needed to make this system work. It may be put forth that this is just a broken 1/2 wave coil , but this is wrong, since induced coupling is virtually non-existent. The grounds can be separate but must be “local”(nearby). We theorize that a combination of radiated energy and active ground injection at the resonant frequency are responsible for the operation of this system. We were getting 12" arcs off of a “free coil” in a circuit working at only 700 watts. This first step showed us that a truly free, high Q coil can give quite a voltage rise if free of the restrictive mutual inductance of a primary system. 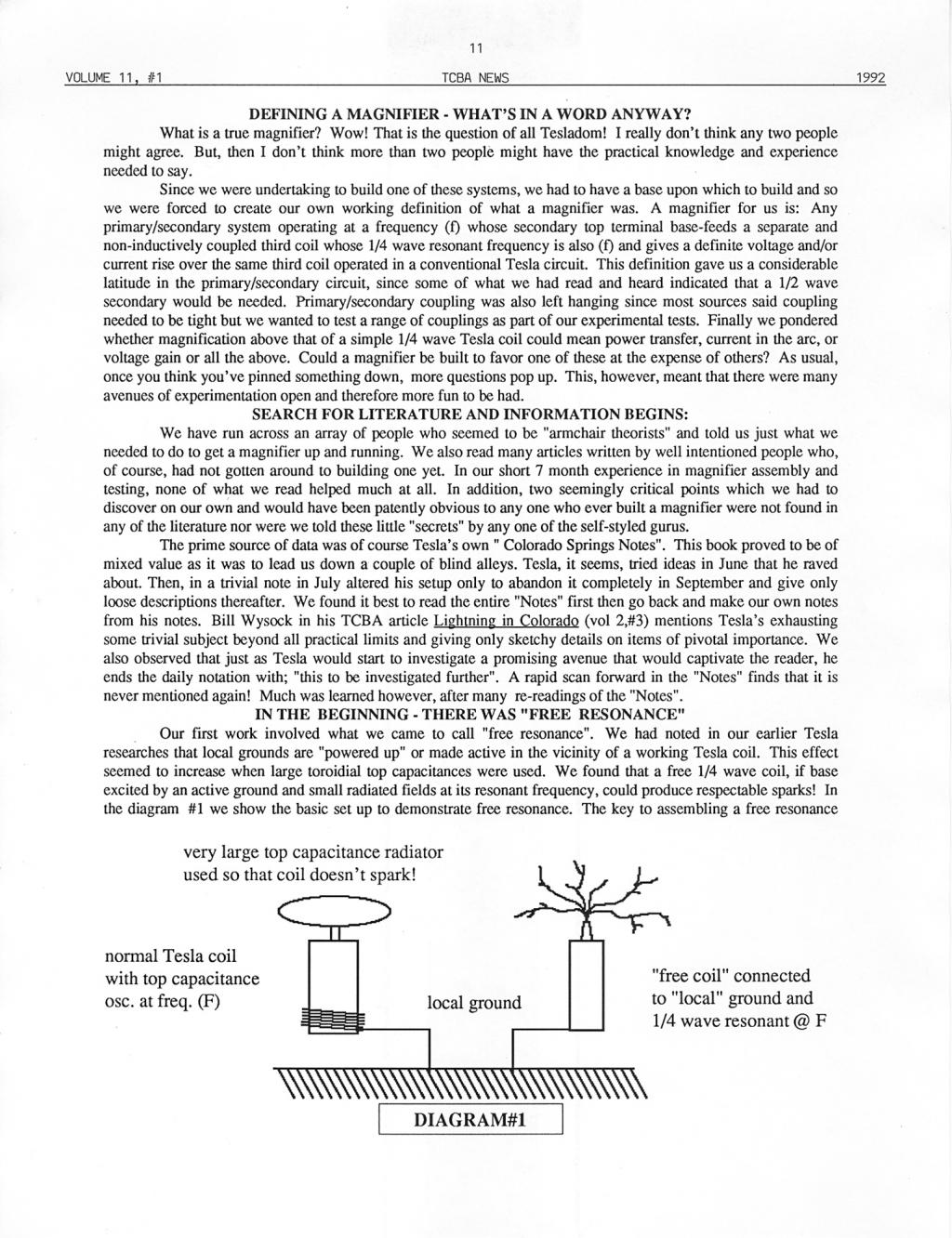