TCBA member W.T. Etzel, Jr., is a volunteer science teacher in the Barnwell Elementary School in Atlanta. He gives about 60 demonstrations during each school year and gets an excellent response from the children. In addition to a Tesla coil, Etzel uses a Jacob's Ladder and other devices to teach atomic structure, magnetism, electric motors, mechanics, and the properties of air. If there were more people like W.T. Etzel, our schools would be farther ahead in science than where science education now stands.

It is not uncommon for me to receive correspondence and/or phone calls from experimenters requesting information on building large Tesla coils. One recent encounter is typical of the type that make me cringe. A young man intent on building a 5 kva system asked some questions that made it apparent he was too inexperienced to undertake a project of that size and power. His only previous experience had been a small coil that never saw a successful end.

I suggested that he follow a systematic approach for building a large coil by starting small and then go through several projects each of which would be larger in size. His complaint was that this procedure would mean starting all over again for each project (the expense of buying new equipment). I explained to him that this was the name-of-the-game - that there was no quick fix to a Tesla coil education. Fortunately, I talked him into a reconsideration of his approach. Otherwise, all I could visualize for this young man was total failure.

Questar Video is distributing a series of video programs devoted to famous Americans. Among those honored are Charles Lindbergh, Douglas MacArthur, Babe ruth, Henry Ford, and Thomas Alva Edison. The video consists of historic motion pictures and rare stills of the subjects honored. Edison can be seen and heard in both silent and sound motion pictures. The famous American series is priced around $20 and should be avialable from your local video dealer or through mailorder firms.

'Edison the Man' Now on Video

The 1940 MGM production EDISON THE MAN has been released on video for general distribution and is available through regular video outlets. The film starred Spencer Tracy. See cover illustration and page 17 for a 1940 film review.

The July 24, 1991 issue of the CONGRESSIONAL RECORD (House H5813-5815) included a commemoration of the 135th anniversary of Nikola Tesla's birthday. The commemorative speech was given by Mrs. Bentley (MD) (tip from Mark Graalman)

The second issue of the ELECTRIC SPACECRAFT JOURNAL contains the first of a series of articles devoted to Tesla's Long Island communications tower. This review included a number of interesting speculations as to the manner of construction and how Tesla proposed to use it to achieve his goals of wireless communications and power. Also included is a two-page “Tesla Date Chart” detailing events in Tesla's career (1856-1943). Elsewhere in the same issue is a sketch and explanation of a “Tesla High Voltage Electrode Design” which Tesla intended upon using as a particle beam weapon. The ELECTRIC SPACECRAFT JOURNAL is a quarterly with a subscription cost of $24 (overseas higher). For more information, write to P.O. Box 18387, Asheville, NC 28814.

New Light on a Forgotten Inventor

The ANN ARBOR NEWS for September 5th carried an article devoted to the work being done by John Wagner and the Tesla Memorial Society. It appears that their efforts to get a response from the Smithsonian to prepare a Tesla exhibit is paying off. Some encouraging statements from Bernard Finn, the Smithsonian's curator, seem to indicate a change in his previous anti-Tesla attitude. The Smithsonian is considering a 1993 exhibit that will coincide with the centennial of the World's Columbian Exposition. It should be noted that the January of 1993 will mark 50 years since Tesla's passing.

The Michigan publication also reported that the Ford Museum in Dearborn is planning a “Made in America” exhibit “that will put Tesla on a par with Edison.”

It was also reported that films on Tesla are being separately considered by David Lynch, Ted turner, and George Lucas. “See the excitement coming.” (tip from James DiMichele) 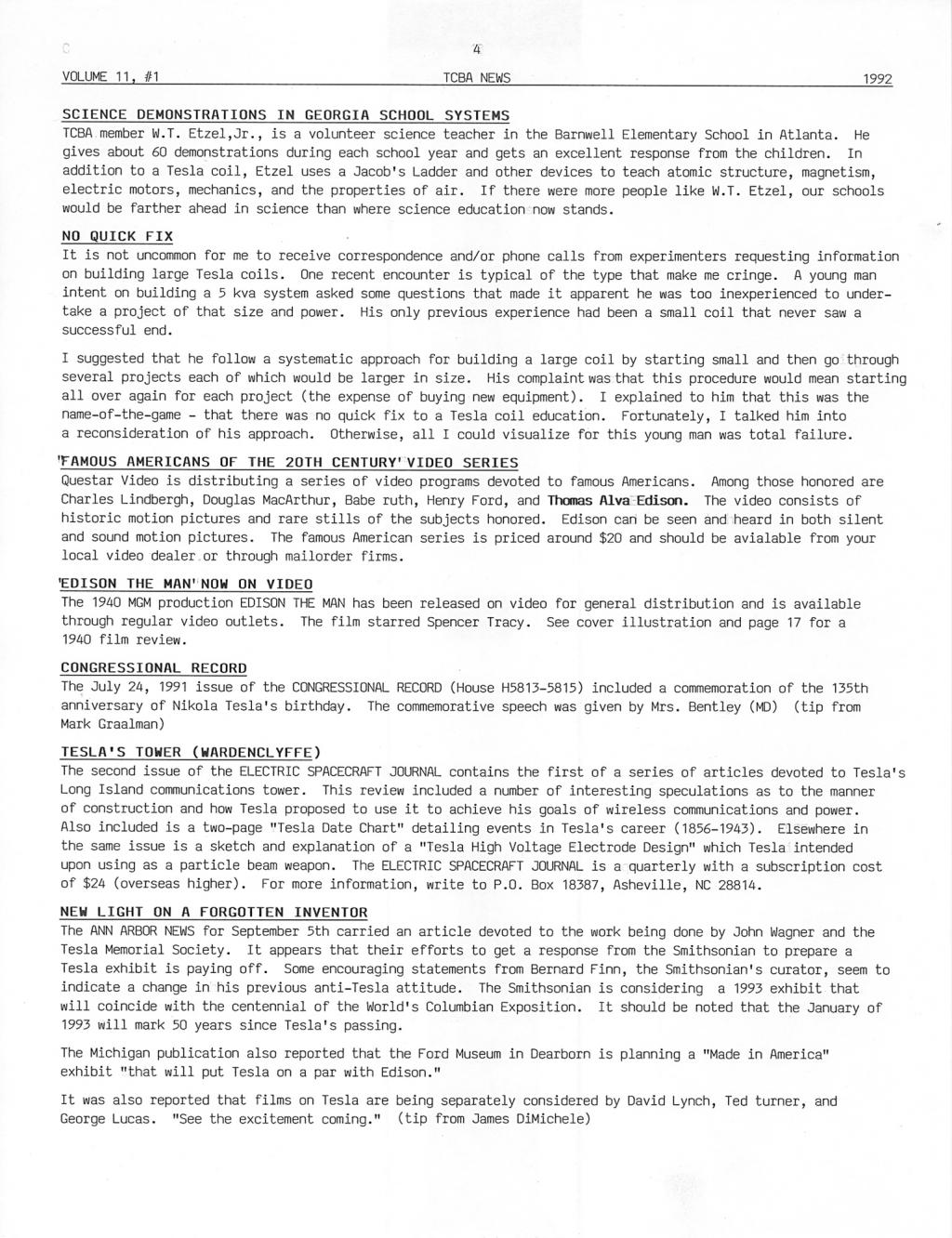