There are 29 reels of actual motion pictures known to exist that cover the life of Thomas Edison. Included among the reels are 2 miles of film showing all the details of his laboratory. In addition, there have been a number of professionally made motion picture and television films based on his life. Of those I've seen, MGM's 1940 productions YOUNG TOM EDISON (Mickey Rooney) and EDISON THE MAN (Spencer Tracy) made the greatest impression. Both were first rate films in which Rooney and Tracy played their parts admirably.

I was in my sophomore year of high school when the films played at our local theater. Those were the days when movies were made for family viewing. You could always tell the good guys because they wore white hats, didn't smoke or drink liquor, use foul language (“Gosh mam”), or kiss the heroine (until after he first kissed his horse). Few of us had money to spend and what we did earn, we saved. However, I did not hesitate to dip into the coin box when the Edison movies came to town.

If it was MGM's purpose to make Edison look ten feet tall, then the studio achieved its goal. I watched both movies with stars in my eyes. While the historical facts of the productions were a bit stretched, the films did contain a strain of truth. In EDISON THE MAN, the production staff went out of its way to make sure that Edison's inventions were accurately portrayed. The studio sent its technicians to all parts of the country where Edison artifacts were stored. They photographed and measured every one of the inventor's important achievements. The machines shown in the movie were actual working models made to a 1:1 scale. But where Edison took years to make new devices workable, property men turned out a dozen of his more important inventions in a few days. Think of what might have occurred had MGM decided to produce a movie on Tesla's life? It would have been fun sitting on the sidelines watching the studio technicians attempt to duplicate a working 1:1 scale model of Tesla's magnifying transmittter.

I find it a bit difficult watching (through my adult eyes) an old movie that I first had seen when a child. That's because I prefer to hold onto those initial childhood impressions. Whenever my favorite television channel carries one of those old movies, I suddenly regress to that sophomore with the stars in his eyes.

Resolving the War of the Currents 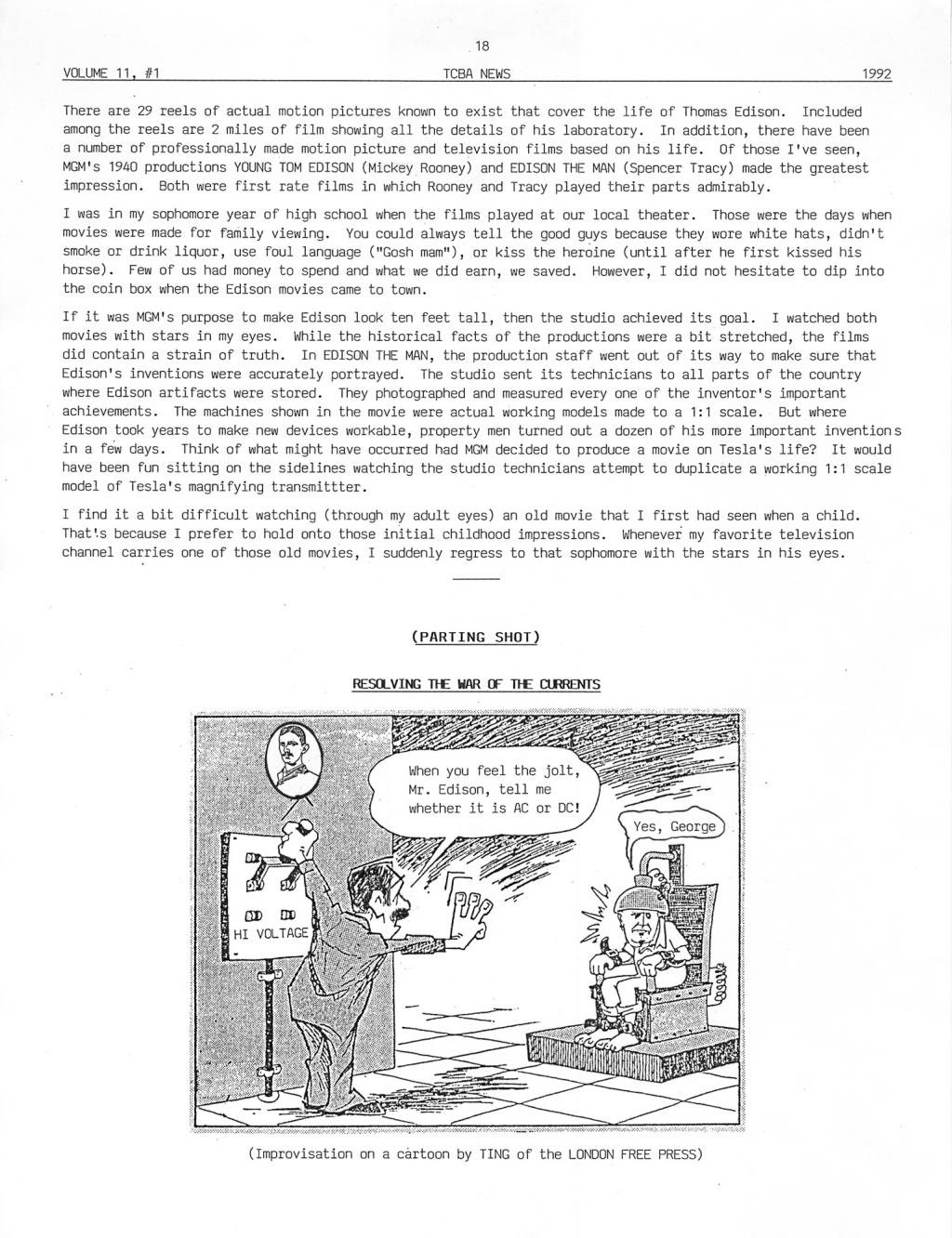