Movies of the Month

More than once it has been remarked that to be a boy is to be misunderstood or, at least, not fully appreciated. In YOUNG TOM EDISON (Metro-Goldwyn-Mayer) one learns that there is something even worse than being “just a boy,” and that is, being a boy destined some day to be a great inventor. Young Tom Edison (Mickey Rooney) was the talk of the town (Port Huron, Mich.). It must be added, though, that the talk was not to the credit of Tom. The fact is, young Tom's presence was about as conducive to peace and quiet as a pack of lighted firecrackers.

Please understand this is not to say that Tom was a bad boy. It was just that always, it seemed, he must be finding out what things are, and why they are, what they are, and how they work. He was very fond of chemistry; always trying to find out what happens when chemical elements are mixed. Then, too, he was constantly inventing things, most of which were not appreciated by grown-ups, especially those at home. His father was most unappreciative of his efforts and always threatening (1) to remove Tom's laboratory which occupied a large part of the cellar space.

His mother, though, was his constant defender, as was his sister, Tannie, (Virginia Weidler). His sister in fact was his first assistant and was often used in his experiments to give demonstrations of how electricity works (2). It was this devotion that got Tom into plenty of trouble. At school Tannie was unable to name the States of the Union; Tom tried to help her by tapping Morse Code hints. Detected by the teacher, he was banished to an adjoining room, which, as Stevenson said about the world, “was full of a number of things,” among them two bottles, one with hydrochloric acid, the other containing ammonia. For a long time Tom had wondered (3) what would happen if these two chemicals were put together. There was no time like this to find out. That discovery was most unfortunate. The smoke created by the mixture caused a fire alarm and the volunteer fire department rushed into action.

Alas for young Tom Edison! When his father learned that his son had again made a laughing stock of himself, he rushed him home (4) where once again the old woodshed heard familiar sounds - and worse still, Tom was dismissed from school. After that, a good many things of exciting interest happened. One incident resulted in Tom getting a job on the Port Huron-Detroit train selling candies and fruit, and a newspaper (5), which he printed on a printing press set up in the baggage car. There also he installed his laboratory. It was Civil War time and Tom, having himself manufactured an explosive, exhibited it to an Army officer on the train with the suggestion he might help him sell it to the Government. When he tells the officer it contains nitroglycerine, an alarming situation develops that all but scares everybody stiff, including Tom (6). Literally, it is all screamingly funny, as are so many other of Tom's surprising escapades.

The big and really rousing situation comes, though, toward the end of the picture when, a bridge on the railroad having been swept away in a storm, an oncoming train cannot be warned because the telegraph wires have also been broken down. This is young Tom Edison's hour of triumph. The telegraph operator, besieged by citizens whose friends are in danger on the train (7), is approached by Tom with the statement that he knows how to send a message in the Morse Code without the aid of wires. The plan works. Young Tom Edison becomes a hero. The railroad company rewards him by offering a new job in Detroit as a telegrapher, and in the last scene (8) Tom departs in all his glory to begin the career that amazed the whole world. 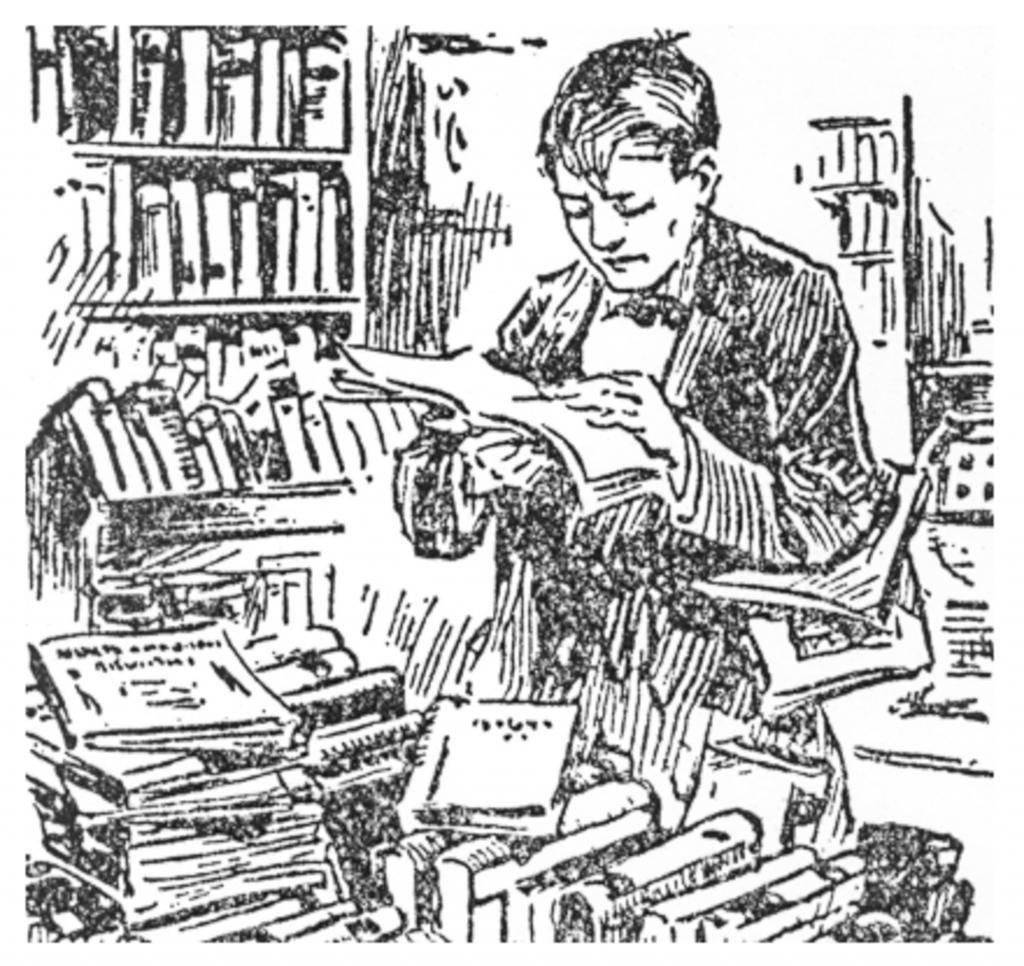 If you saw Young Tom Edison, it is good news that EDISON, THE MAN (Metro-Goldwyn-Mayer) is quite as entertaining, for in it are portrayed events that are truly wonderful. The invention of the electric light and the phonograph are featured. Around, these, as an alluring plot, the action is woven. Highlighted facts become dramatic with all the fascination of fiction. History in the form of biography possesses the very breath of life; not words portraying a great man, but life realized, embodied in an actor (Spencer Tracy), who so well plays his part, Edison himself seems to be the person you see and hear. As the story unfolds in action, true to the last detail, a picture is drawn of how the inventor worked; not with the wizardry of the master magician but the patient persistence of the master workman, whom defeat cannot down.

Beholding there on the screen, so vividly real, the conquests of genius so great; realizing the infinite patience and persistence, the marvelous skill and, above all, what one man did, you wonder. You wonder not only about this one man but about other individuals who have done so much not to help but to hurt the world by satisfying their ambition to conquer it - an Alexander, a Napoleon, a Hitler. And sitting there, still wondering, you are reminded that the verdict of history is that such men soon pass, and their glory, and, eventually, even the evil they do. But, the benefactor, Edison, the world-famous, all conquering inventor, what of him? What answer can there be other than that, though he be dead, the good he has done survives and ever will in some form, to bless the world, all of it, the whole earth over. Don't miss seeing EDISON, THE MAN. The Man! How truly that. 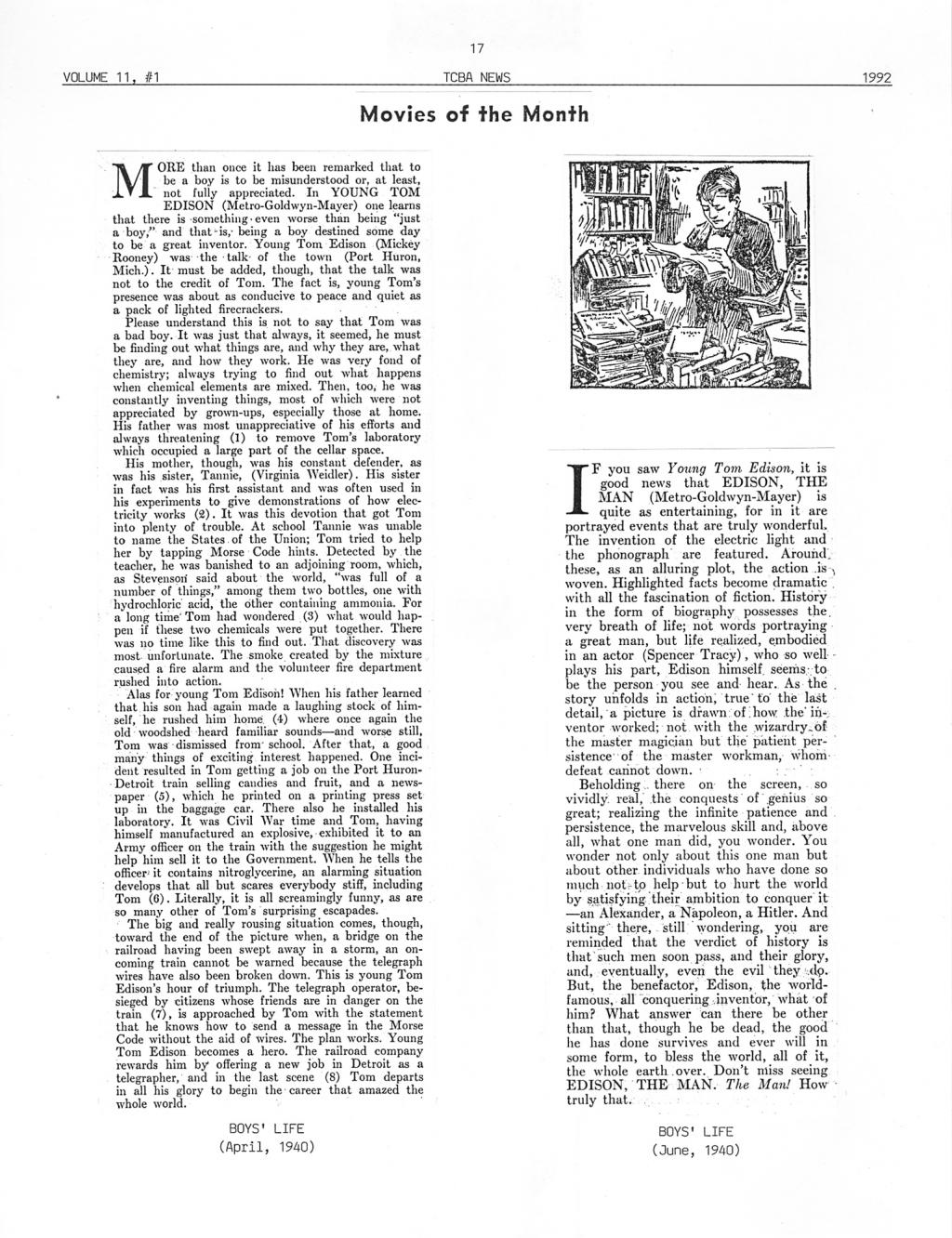