“Ever since Nikola Tesla proposed the idea at the turn of the century, many have tried with little success to transmit electric power without wires. Even Tesla's experiments produced few results. The technology could get a big boost from NASA in its efforts to find a reliable space-based utility.” NASA is considering using solar power satellites to generate the power and microwaves to transmit it stated DESIGN NEWS TECHNOLOGY. (Jerry Brown)

The August issue of WORLD RADIO carried an article by Josh Logan (WX7K) praising Nikola Tesla. “Tesla was in all likelihood, 100 to 150 years ahead of his time. He was a 'man out of time' ...It would be nice to see the school and history books give the recognition due to that giant of invention - Nikolai Tesla!” (Mark S. Graalman)

The September issue of RADIO ELECTRONICS featured a solid state high frequency transformer by TCBA member Duane Bylund. A nice color photo of his Model 1 coil decorated the cover. Bylund's project differs from the usual construction in that he (1)uses a solid state power supply and (2)the high frequency secondary is directly, but noninductively, coupled. The project is called a Tesla coil but it appears to be a cross between a Tesla and Oudin arrangement. Duane Bylund offers a voluminous book called MODERN TESLA COIL THEORY.

The premier television program “Fantastic Facts” featured some Tesla data in its introduction. The August 16th program demonstrated a large working Tesla coil. CBS was carrying the program on Friday evenings at 8:00 EST. A new book, THE POWER OF YOUR SUBCONSIOUS MIND, by Dr. Joseph Murphy tells “How a distinguished scientist brought forth his inventions.” He explains that Nikola Tesla used his subconcious mind to develop a perfect product. Said Tesla, “Invariably, my device works as I imagined it should. In twenty years, there has not been a single exception.” (tips from Glenn Harrison)

Bob Svangren, west coast Tesla coiler, traveled from Kennewick, Washington to Richmond, Virginia, to visit with the members of the Tesla Coil Builders of Richmond. His visit coincided with the 2nd annual Teslathon bash there. Bob and three other out-of-state folks joined about 20 other members and Virginia coilers for the gala affair. Seven different coils were shown plus the TCBOR magnifier at Richard Hull's home and lab where the event was held. Lots of hotdogs, corn, and taters were consumed and much ozone inhaled in the 3 pm to 1 am event! The lowest power coil was a 40 watt radiating disruptive discharge coil. The highest power coil was Hull's “Nemsis,” a 13 kw monster which sent 14 foot plus arcs out into the lab.

Bob Svangren was in Richmond for two days and visited Bill Richards' new Tesla lab and met the group Friday prior to the Teslathon. Bob has just constructed a new giant coil, “Krakatoa,” and brought a video of it to present to the group. Bob left with a load of gifts, too. After the November, 1990 visit of Jeff Mullins from California, the group felt honored to have a second west coast Tesla buddy show up. It is this spirit that will keep the Tesla community bound together and help to disseminate knowledge amongst us. (report from TCBOR)

A conference celebrating a centenary of AC power was held in September at Telluride, Colorado. In 1891, the first use of long-distance transmission of AC electric power for industrial purposes took place at that location. The program included participants from many fields including historian Charles Ruch of the Westinghouse Corp.

If you're into social drinking, you might want to avoid a certain Mishawaka (Indiana) bar. Until recently, Ski's Place was a favorite stop for bikers. Alva Noble was having a beer with a friend when he noticed that he was on fire. Noble was instantaneously knocked to the floor by an uninvited guest: Lightning! Steve Knepp was nearby. A lightning ball whooshed by him and the next thing he knew was that he was lying on his backside. Apparently, the ball lightning unloaded its energy and shot a fireball up through the floor. The force blew out all of the windows. A second floor toilet exploded underneath a man who was seated on it and “Dad” Hartzke was walking around without shoes. Others were dazed and some could be seen walking around with skin fragments hanging from their bodies. The tavern sustained an estimated $150,000 damage. Do you think that Nikola Tesla knew what he was talking about when he stated that “ball lightning can explode with inconceivable violence?” (Doc Taylor) 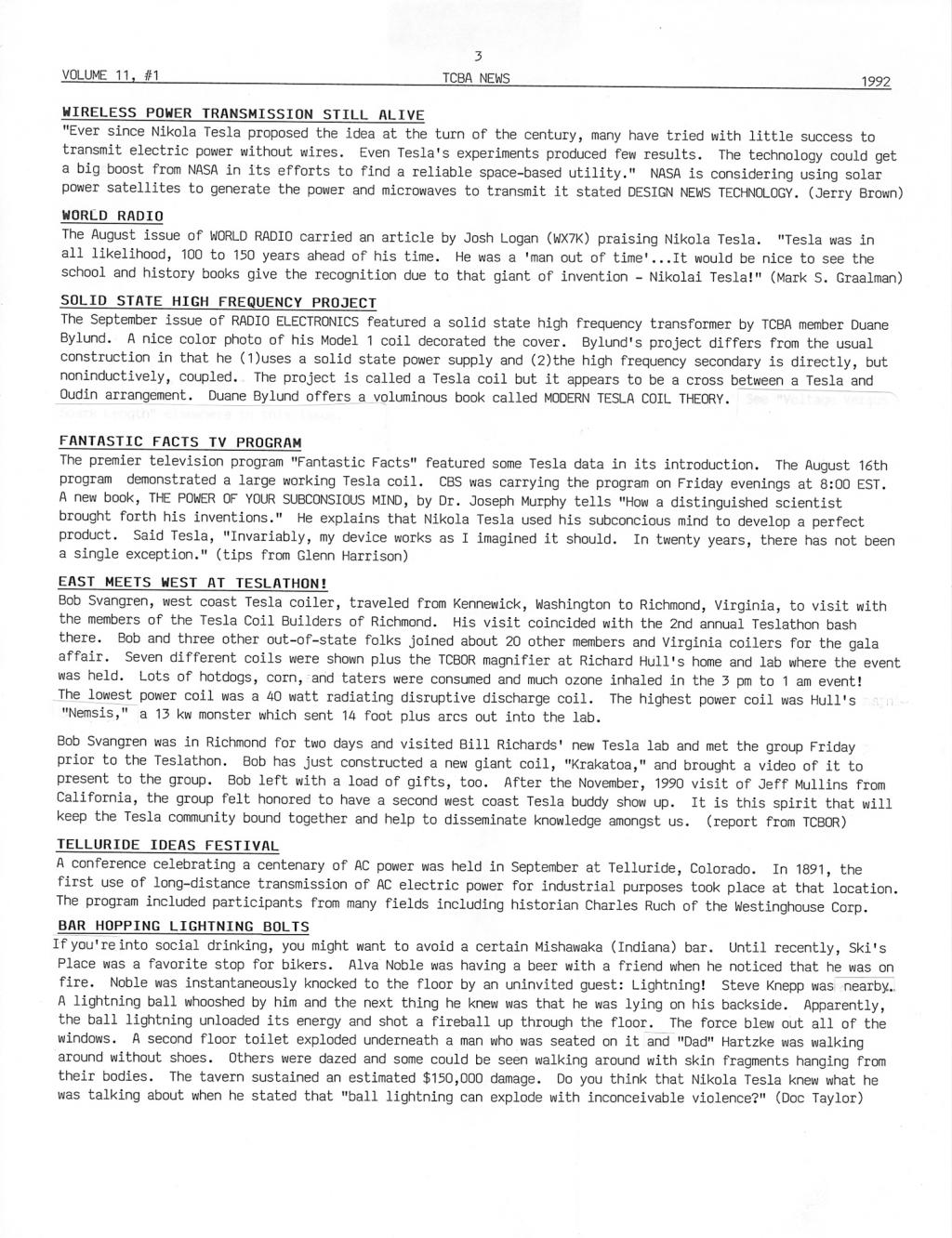