See “Movies of the Month” on page 17 and the discussion on the upper portion of page 18.

While searching through a pile of old magazines, I came upon The Electrical World for October 1, 1932. The cover proclaimed “Fifty Years of Electrical Progress.” Underneath was a photograph of Thomas Alva Edison. A more appropriate title might have been “Fifty Years of Edison Electrical Progress” as the contents of that issue focused on historical accounts of Edison's part in electrical power. However, by 1932 the world had dumped Edison's DC system and had adopted the Tesla polyphase method. Nowhere in the 106 pages was Nikola Tesla mentioned. In addition, the name of Westinghouse appeared only twice and that of William Stanley just once. Steinmetz was mentioned but nothing was said of his contributions to electrical progress. What's going on here? Jumping ahead to the year 1988, the electrical industry also chose to ignore the anniversary of Tesla's monumental paper on polyphase currents, too. I used to laugh at those who charged that there was a conspiracy by the electrical industry to remove Tesla's name from the books. Now, I'm listening.

Our Debt to Tesla*

“National Electrical Week has helped bring the role of electricity into proper perspective but one of the industry's greatest pioneers seems destined for oblivion insofar as the public is concerned” stated the ONTARIO HYDRO NEWS for February, 1962. The article goes on to give Tesla credit for his contributions to electrical progress.

Revenge of the Tesla Heads*

“Everyone is excused for not knowing who Nikola Tesla was...In times like these, everybody needs to know... Because unmistakenly, all around us, while we blithely continue to hail pretenders like Thomas Edison and Marchese Marconi - the Tesla heads are taking over.” This BUFFALO NEWS article of July 17, 1991 referred to an increase in interest in Nikola Tesla's work. The article carried the famous photo of Tesla seated in a chair while holding one of his wireless bulbs.

A NIAGARA FALLS GAZETTE column “The Way We Were” reprints events of 100 years ago. The column for 7/14/91 referred to an article describing Nikola Tesla's visit to the falls. “He was here with George Westinghouse, president of Westinghouse Electric Co., and George Rankin, secretary of Cataract Construction Co.” When guestioned by reporters, Tesla responded “Yes, this is my first visit to Niagara Falls and the power house here... Niagara Falls has the greatest future of all, for here it will be the cheapest to obtain power, and its limit is hard to imagine.

The NIAGARA FALLS GAZETTE for September 1, 1900, hailed the decision by Judge william K. Townsend who stated in picturesque diction praise for the inventive genius of Nikola Tesla. “What others looked upon as only invincible barriers, impassable currents, and contradictory forces, Tesla seized and by harmonizing their directions, utilized in practical motors in distant cities the power of Niagara.” In rendering his decision upholding the Tesla electrical patents, Judge Townsend proclaimed that “Without Tesla, Niagara Power would not have been.”

Only the Names Change

Do any of you remember the old Violet Ray medical machines that promised cures of everything from Brain Fag to Urticaria? They really didn't do much except to make money for the manufacturers. If you think those days are over, think again. But instead of Violet Ray machines, the snake oil merchants are jumping onto the Microwave Resonance Therapy bandwagon. You can now buy an MRT BIO-ENERGIZER for only $248. The device looks like a miniature Violet Ray unit (without the tube) that runs on a 1.5 volt AA batery. It is small enough to be carried in a pocket and is said to produce 14-20 kilovolt arc discharges plus super high freguency waves at a rate of 10 pulses per second. Then, there is the Teslar watch for protection agains electromagnetic pollution (give me a break), Purple Plates (for I know not what), a Pulsor, the Rez and other miracle healing devices. All of the above are offered by a firm called Essentia Communications and is located in Ontario, Canada. The more things change, the more they remain the same. Only the names change.

* All tips marked with an asterisk courtesy of Herb Force. 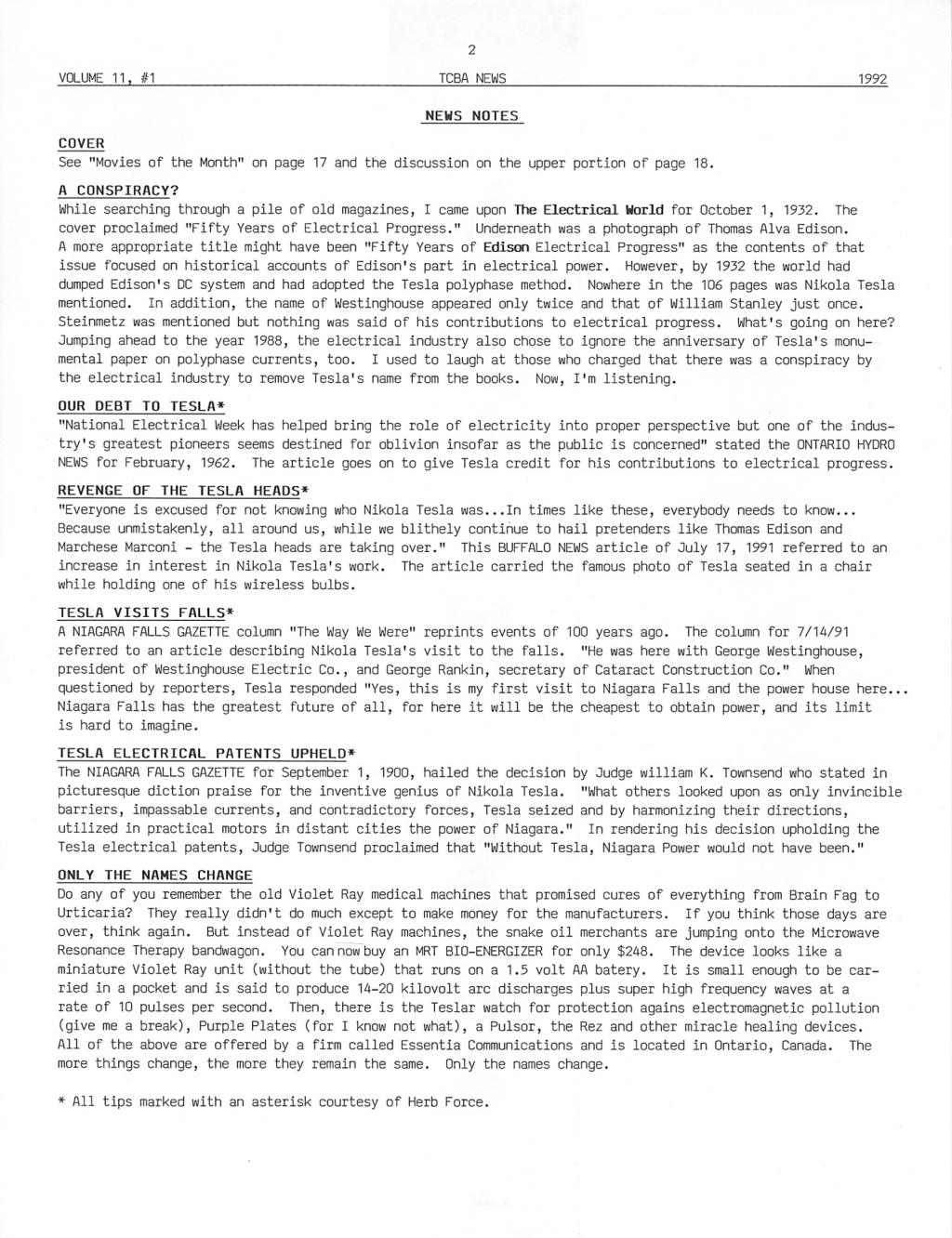